As each year passes, I look back on my youth with a bit more awe. To take my mind and transplant into my teenage self would make my life now turn out a lot different. Not that I’m unhappy with it, but I don’t think there’s a person in the world who wouldn’t like to go back in time knowing what they know now. I’m going somewhere with this, I assure you. I look back on the late 80’s and early 90’s as some very formative years. Music never really played a big part in my life, no that would be the world of film, but I think anyone reading this already knows that.  I do, however, remember NWA and some of the urban “hip hop” rap that came out around that time. I remember artists like Ice-T, LL Cool J and, of course, NWA.  I was actually old enough to purchase these CD’s and bought them for my younger brother and his friends (bear in mind that this was before the days were you could just burn them). Still, I can’t relate to what these groups were saying. I wasn’t judged on appearance, didn’t have bars on my windows and wasn’t ever harassed by the police. But it was that raw emotion that made these albums so impactful and, as we look back – NWA was a group for the ages…

As is the case with most biopics, this is just a retelling (albeit a rather lengthy one) of the roots of NWA and a look at the central members, notably Dr. Dre (Corey Hawkins), Ice  Cube (O’Shea Jackson Jr.) and EazEntrenched in the racial tumult of Los Angeles in the mid-1980’s, a group of aspiring rappers banded together to revolutionize the global consumption of hip-hop and popular culture. NWA was born out of racial frustration and the disadvantaged economics of their South Central neighborhood. F. Gary Gray directs this biopic about the rise to stardom for the act that earned the moniker of “The World’s Most Dangerous Group,” featuring Ice Cube’s son O’Shea Jackson Jr. playing the role of his father, Corey Hawkins as Dr. Dre, and Jason Mitchell as the late Eazy-E.y-E (Jason Mitchell). That’s not to discount the other two members: MC Ren (Aldis Hodge) and DJ Yella (Neil Brown Jr.), but the three that really stood out are the ones that the film focuses on. We meet Eazy-E, a drug dealer who eventually lands with Ice Cube and Dr. Dre and, after a bit of convincing, becomes the voice behind the group NWA. It’s not long before the group becomes known and subsequently represented by Jerry Heller (Paul Giamatti). Heller partners with Easy-E, who provided all of the band’s funds, and as the group takes off the paranoia begins. Ice Cube, feeling he’s being cheated out of money, departs from the group and goes solo. Soon after Dr. Dre leaves and partners with thug/producer Suge Knight (R. Marcos Taylor). We see the rise of the group as well as the rise of the hip hop rap scene. Look closely and you’ll see some familiar faces like Snoop Dogg (Keith Stanfield), Warren G (Sheldon A. Smith) and Tupac Shakur (Marcc Rose).

As nice as it was to see all of this on screen, I felt it dragged on a bit too long. Then again I watched the Unrated Director’s Cut and it was nearly three hours long, so I’m guessing that’s why. The first two acts were interesting and really brought back some memories for me, though I found myself wondering when the movie would end and just assumed it would be when Easy-E finally succumbed to AIDS (I don’t think that’s a surprise to anyone reading this. If so…oops). The performances are all great and I’d wondered how they found a dead ringer for Ice Cube – well as it turns out it’s his real-life son who’s the spitting image of his old man. How about that! One of the stronger performances is turned in, again, by Paul Giamatti who just seems born to play sleazy managers. I’m reminded of his first role in Howard Stern’s Private Parts where he played “Pig Vomit.” Think of that and that’s a good indication as to what to expect here. The film was both critically and commercially successful and pays tribute to the roots of the hip hop rap scene. It’s a great film and was fun to watch, I don’t know what else you could ask for.

This is a dark movie and please don’t infer anything racial in that statement, a majority of it takes place at night or in clubs. Granted, as the group prospers, we get our share of pool parties in the California sun. Universal has given us a great-looking 2.40:1 AVC HD image that’s on par with what we’d expect. Contrast and black levels are solid and detail is sharp as a tack. I remember the Chicago White Sox hats (when they first changed their logo from the “C:), and you can see each character in calligraphy. Friends of mine used to take a black magic marker and color out one of the lines on the hat so it would spell “Sex” instead of “Sox.” Ah…those were the days. Suffice it to say that this brings the goods visually-speaking. This is nearly as perfect as it gets.

Generally-speaking a movie based around music, especially rap music, will need to sound good. And it does. The DTS HD Master Audio soundtrack thumbs the bass like no movie I’ve heard in recent years. I found myself singing along with some of the lyrics and was amazed at how easily they came back to me. Vocals were sharp and crisp and even though some of the lines sounded a bit muffled, it wasn’t a fault of the mix. The LFE were used heavily during some of a concert scenes, especially the ill-fated one in Detroit. I could go on and on, but I’ll end by saying that this soundtrack rocks – on all levels.

The music might not be for everyone, but for those that remember this period, it’s a pretty nice walk down memory lane. Love them or hate them, N.W.A. did change the face of music and ushered in a new era. Universal’s Blu-ray offers superb audio and video along with enough extras to warrant a purchase. Recommended. 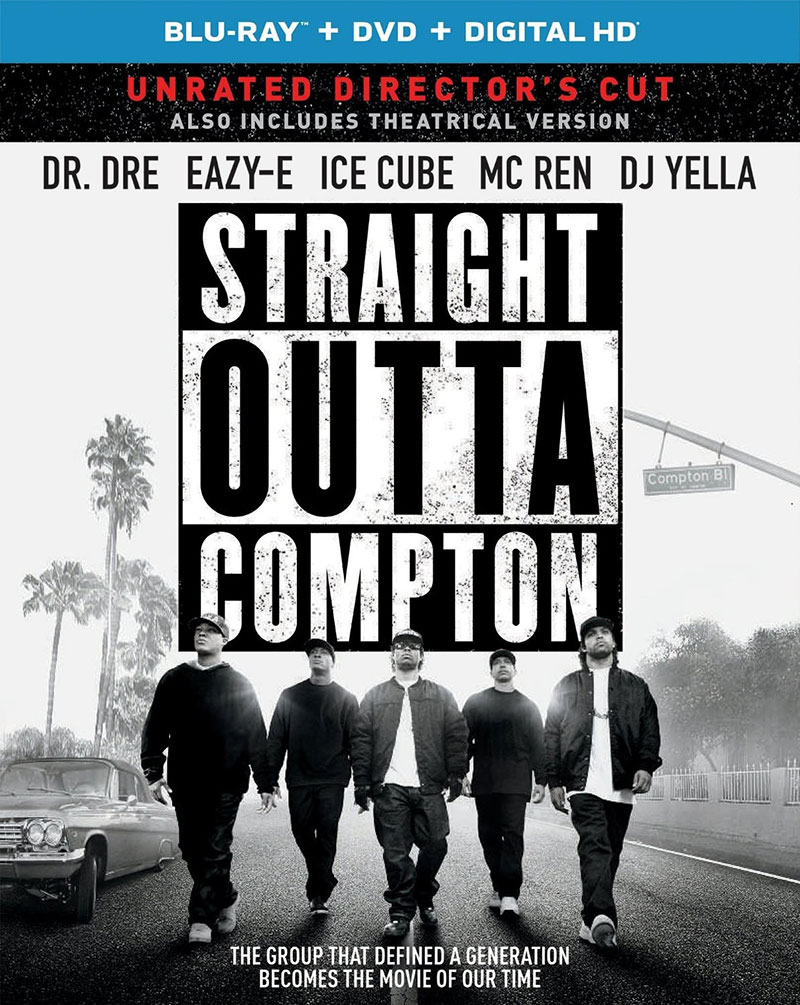