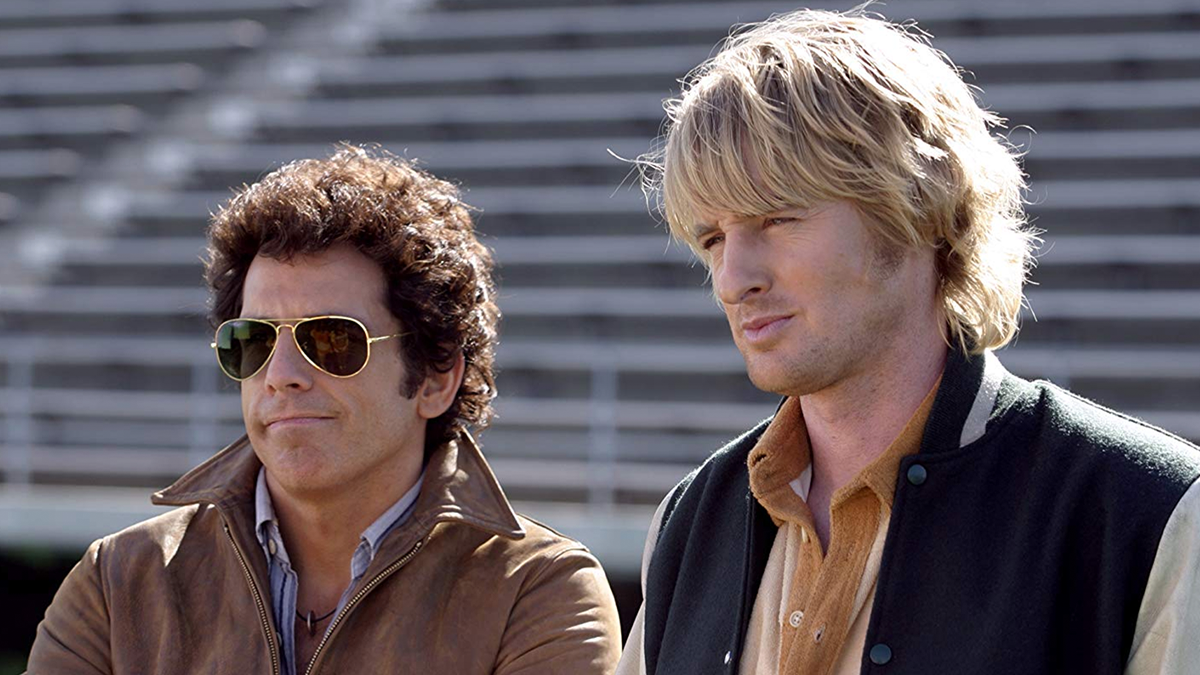 As Hollywood goes through the television shows of the 60’s and 70’s (seemingly one at a time, no less) it’s inevitable that essentially every one will be turned into a major motion picture in the next few years. Don’t get me wrong, there’s been some good adaptations from the small screen to the big (The Fugitive, Mission: Impossible and even Charlie’s Angels had its charm). Lest we forget, however, the tons that came out and we’ve forgotten about. Starsky & Hutch was a mediocre show when it came out in the mid to late 70’s and I was really too young to ever get into it, though I remember the red car. But in Ben Stiller and Owen Wilson’s hands (starring in their sixth movie together), I’d see a movie with them in it regardless of plot…to an extent. Yes, the duo’s chemistry really is that good. Director Todd Phillips has found a genre that suits him well, that college/post collegiate group of men who will see anything with their friends if it has hot women, cool stunts and gross out humor. The movie seems to be less about Starsky and Hutch than about seeing Stiller, Wilson, Vince Vaughn and Snoop Dogg looking like 70’s street pimps (and only one of the aforementioned actors is).

David Starsky (Ben Stiller) is your typical cop. His perm is mighty fine, though he’d give an old lady a ticket for jaywalking. The yin to his yang is Ken Hutchinson (Owen Wilson), the more laid back “let the chips fall where they may” kind of cop. Much like Riggs and Murtaugh, these two really couldn’t be with anyone else but each other. When they find a body in the ocean, Hutch’s suggestion is to push it back out to sea, where it will presumably float on down to another precinct and they won’t have to take the case. This doesn’t happen and it gives the duo their baptism by fire. Reese Feldman (Vince Vaughn) is the criminal mastermind who has discovered a way to import cocaine that is both odorless and tasteless, thereby fooling the police dogs and making him richer than rich. Through some undercover work, Starsky and Hutch must track down Reese, but also tarnish his golden public image and prove that he’s the one behind everything that’s been going wrong in Bay City. Now this wouldn’t be a movie without the aforementioned hot chicks and this is where Amy Smart and Carmen Electra come into play (as cheerleaders Holly and Staci no less). Last but certainly not least, Will Ferrell delivers one of the best cameo appearances of recent memory with his jailed perverted persona – Big Earl. Words can’t do his scene justice, so you’ve been warned.

Starsky & Hutch must be taken with a grain of salt. The opening credits show that this is more of a light-hearted comedy, as if we didn’t know that already. Phillips has gone back to regular, Vince Vaughn who plays a decent bad guy. He’s constantly surrounded by a cloud of smoke, which only adds to his appeal. Rapper/Actor/Whatever he is Snoop Dogg has a supporting role as Huggy Bear who unwillingly helps out Starsky and Hutch with their investigation. Snoop has found a role that’s really him as I found myself just wanting to see what he was wearing from scene to scene as opposed to what his character was doing. The movie certainly won’t change the way films are made, plain and simple. It’s a fun movie to watch – once – and maybe after you’ve had too much to drink. Stiller and Wilson are the movie and without them, well, I can’t imagine what it would be like. I don’t think there will be any sequels; then again they’ve made them for movies far less successful than this. Fans of the “70’s television series to movies” will not want to miss this and for some decent chuckles, I’d recommend a rental first.

Starsky & Hutch has been given a new HD remaster and given that the original really wasn’t that old (2004), this is a good thing. Colors are bold, especially those involving Snoop Dogg’s character. Then again, we have to think back to the original show, made in the 70’s, where all of the colors are muted. This looks great by comparison. Edge halos and artifacting aren’t ever an issue and though the transfer isn’t perfect, it’s just about the next best thing. Flesh tones are warm and natural with only the slightest bit of bordering on “muddy”. All in all, it’s about what you’d expect and Warner has done a great job here, as they usually do.

The Dolby Digital 5.1 soundtrack on the DVD has been replaced by a new DTS HD Master Audio mix. While it’s not a night and day difference, there is a bit more emphasis on the front channels. I found the dialogue reproduction to be above average and the surrounds are actually used quite a bit during the course of the film. There are several car chases (which we might expect) and guns blaring, etc. Let’s face it, this isn’t going to be a film that’ll test the limits of your home theater, but it is an upgrade over the DVD and more than delivers the goods. It’s a welcome upgrade.

The extras seem to be the same as the Special Edition DVD.

Starsky & Hutch remains one of my favorite films of the 2000’s. I love it. It’s got some great lines, doesn’t take itself too seriously and has a top notch cast. Fans of other films of the genre like Anchorman, Old School or The Hangover. Warner Archive hasn’t given us any new features, but a new audio mix and a new transfer (and the film finally finding its way to Blu-ray) are more than enough.