I sit here, at my keyboard, reflecting back on the career of Bill Murray. Murray, who was one of the original cast members of Saturday Night Live, has gone onto a film career that most would envy. His role of Carl in Caddyshack still cracks me up every time I see it, but there’s a lot more to him than that. He’s proven himself, time after time, in roles that don’t seem very challenging – but good actors make their work look easy. The 80’s and 90’s were Murray’s swan song, his roles in Ghostbusters, Groundhog Day and Kingpin showed that he still had what it took to make us laugh. Around the millennium, he got a little more serious. His quirky roles in Wes Anderson’s films (The Royal Tenenbaums, The Life Aquatic and Moonrise Kingdom) showed his more dramatic (yet still serious) side, but roles in film like Broken Flowers, Lost in Translation and The Monuments Men showed that he couldn’t be pigeonholed as an actor. With St. Vincent, we find Murry playing a foul-mouthed degenerate who just might be the anti-Christ. This should be fun to watch…

Vincent MacKenna is a Vietnam Veteran who has just about every bad habit there is. He drinks to excess, he smokes, he gambles, he lies, he steals and has sex with Daka (Naomi Watts), a pregnant Russian dancer/prostitute.  It should come as no surprise that he’s generally an unhappy person and the fact that he’s taking care of his wife at a nursing home isn’t helping matters. However, as fate would have it, he gets two new neighbors in Maggie (Melissa McCarthy) and her son Oliver (Jaeden Lieberher). Through a series of circumstances Vincent becomes Oliver’s babysitter, but more along the lines of a surrogate father (something that Oliver is lacking in his life). The two form an unlikely bond that’s not exactly typical or healthy, but it’s clear that these two are learning from one another.

There’s a lot to like about St. Vincent and very little not to. I found it entertaining and amusing with just the right amount of “seriousness” to it that made it believable. I was reminded of some other light-hearted films in this same genre like Little Miss Sunshine and the aforementioned The Royal Tenenbaums. Murray makes this role his own and he clearly had fun with it. It’s also nice to see both Melissa McCarthy and Naomi Watts play roles that we haven’t seen them in before. McCarthy plays is decidedly low key while Watts seemed to have fun with her Russian prostitute/dancer role. St. Vincent is a movie that will, quite frankly, catch you off guard. It’s funny, yet has enough punch that’ll bring a tear to your eye as well. And that’s saying something.

On the surface, there’s not a whole lot with this presentation. The 1.78:1 AVC HD image reeks of everything we’d expect from a new to Blu-ray film, but the crystal clear clarity of the picture is second to none. Granted this shouldn’t be a surprise as most everything that’s new looks like this, but the detail that showcases the 5 o’clock shadow in Murray’s face, the grey and thinning hair and everything in between. It’s actually a fairly colorful movie, though I’m trying to block the scene with a pregnant Naomi Watts as we see her “doing her job” in the opening sequence. Still, a nice effort here and viewers will be more than satisfied.

I turned my receiver up a few notches as we had the gas fireplace running, but to my surprise the DTS HD Master Audio soundtrack didn’t really need much help. I found the opening sequence rich and robust as the song boomed throughout all the speakers. Vocals were crisp and pure, Murray’s noted “Chicagan” accent has been replaced by that of a gritty, raspy New York one. Surrounds are used sparingly, but effectively and while the front stage handles the majority of the action, even the scene at the horse races makes you feel as if you’re right there. A nice, unexpected surprise here.

Bill Murray has nothing to prove to anyone. He’s been in the public eye for four decades, has been in some of the more notable comedic films of all-time with roles in Tootsie, Ghostbusters, Caddyshack and Groundhog Day. It’s so refreshing to see such an accomplished and seasoned actor take on new challenges and St. Vincent might actually be some of his best work to date. Murray’s performance was overlooked by the Academy, but this Blu-ray features top notch audio and video quality as well as a nice little tribute to the man himself. 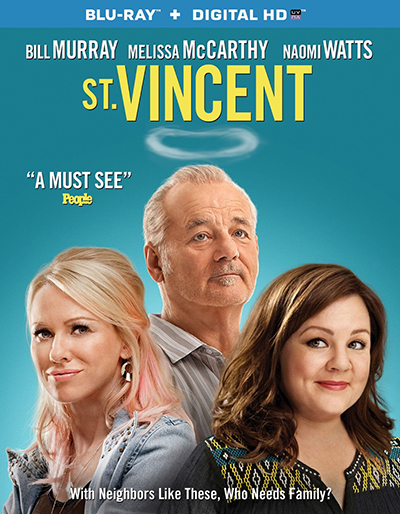