Shout!Factory, through their GKIDS line, two years ago released the incredible Hayao Miyazaki film Spirited Away on Blu-ray. This is widely considered to be one of the best animated children’s films of all time. It is loved by adults and children all over the world. The films of Hayao Miyazaki and Studio Ghibli are so cherished in Japan that there will be a theme park dedicated to them that should open in 2022. My first exposure to Hayao Miyazaki was with the release of his film Princess Mononoke. The film was playing at the local Market Street Theater (our independent theater at the time) and I was only twelve years old, so I had to convince my mom that this PG-13 film was appropriate for me. Luckily, my mom could tell how badly I wanted to see the movie, so she took me to see it. I thought it was great and have seen it several times since. I was much older when I caught Spirited Away. I think that I first watched it when our oldest child was a couple years old. My wife loved that movie and Howl’s Moving Castle, which she had routinely watched while babysitting her young sister and brother. We have revisited Spirited Away every couple years. I owned the older Disney Blu-ray, so I was excited to check out the new special edition just released by Shout!Factory that features a CD of the soundtrack to the film along with a beautiful forty page book.

The story of the film revolves around the young girl Chihiro. Her parents are driving her to their new house with the movers bringing all their furniture ahead of their arrival. When her parents take a wrong turn and see a temple through the trees, they decide to investigate. Chihiro feels worried but her parents tell her to come along. After walking through a tunnel, they come upon a field of grass and an amusement park that seems to be empty. Her parents see a concession stand full of appetizing food. They decide to sit down and eat assuming that they can pay for the food once somebody arrives. This worries Chihiro. She decides to look around the park and she meets a boy named Haku who warns her that she is in danger. When she finds her way back to her parents, they have been turned into hogs. It is not a theme park at all, and as night falls the town fills with spirits. Chihiro has stumbled upon a bathhouse where spirits come to clean themselves and relax. Soon Chihiro must navigate this strange spirit world and save her parents before the owner of the bathhouse, a witch named Yubaba, turns them into supper. As Chihiro works her way through several jobs at the bathhouse, she must also retain a memory of her true identity in the human world. She is helped along by Haku.

Spirited Away has been a family favorite in our household for years. I am not the first to mention it, but it is worth emphasizing that Spirited Away is incredibly imaginative. There is so much care and thought put into the mannerisms and affectations of the numerous spirits that the film eventually sweeps away the audience into the fantasy world it provides. As a concept, the bathhouse for spirits gives Hayoa Miyazaki so many fun avenues to explore. It is a lot of fun to see what the next guest will bring to the film – whether it is a stink spirit or a growing masked spirit that eats everything it encounters. All of these strange spirits are rendered vividly. Miyazaki let’s his imagination run wild to the benefit of the audience.

A lot has been said about this film over the years. It has been heralded as a classic with good reason and I would argue that it is my favorite of the Studio Ghibli films. It’s a stunningly beautiful film full of imagery that holds up well nearly twenty years later. The artistry behind the animation and character designs pairs well with the imaginative story. The big attraction for collectors to this new edition is the beautiful packaging, the new forty-page book with art and interviews, and CD soundtrack for the film. If you already own the 2017 Shout!Factory release, the Blu-ray is the same as that release.

Shout!Factory presents Spirited Away with an AVC encoded 1080p transfer in 1.85:1. This is the same video presentation as the prior 2017 Shout!Factory release. This is not bad news. I compared this release to my original 2011 Disney release. There is a big difference. The video presentation looks superb. As mentioned by another reviewer, the bitrate for the Shout!Factory Blu-ray is much higher than the bitrate of the Disney Blu-ray. This leads to an image quality that easily surpasses that release. Fine detail is excellent, and colors and clarity are superb. I can’t imagine the film looking any better than it does here. This is the version that fans will want to watch.

Spirited Away features both Japanese and English DTS-HD MA 5.1 surround tracks. I have always watched this film with the excellent English dub, but the Japanese track sounds great as well. The surrounds are used cleverly and bring out the beautiful score by composer Joe Hisaishi. There is not much room for improvement here until we can get an Atmos track.

Spirited Away is an amazing film that has delighted children and adults for nearly twenty years. I personally consider this the best Hayao Miyazaki film with Princess Mononoke in a close second place. In their new edition of the film, Shout!Factory has provided a CD of the soundtrack (for the first time available in North America) along with a beautiful forty page book featuring art and pieces on the film. Gone is the DVD from the previous set which means that one special feature has been eliminated. The Blu-ray is the same Blu-ray that Shout! Factory released in 2017 which had greatly improved video over the 2011 Disney Blu-ray. The new box art and presentation is a work of art that collectors can proudly display. 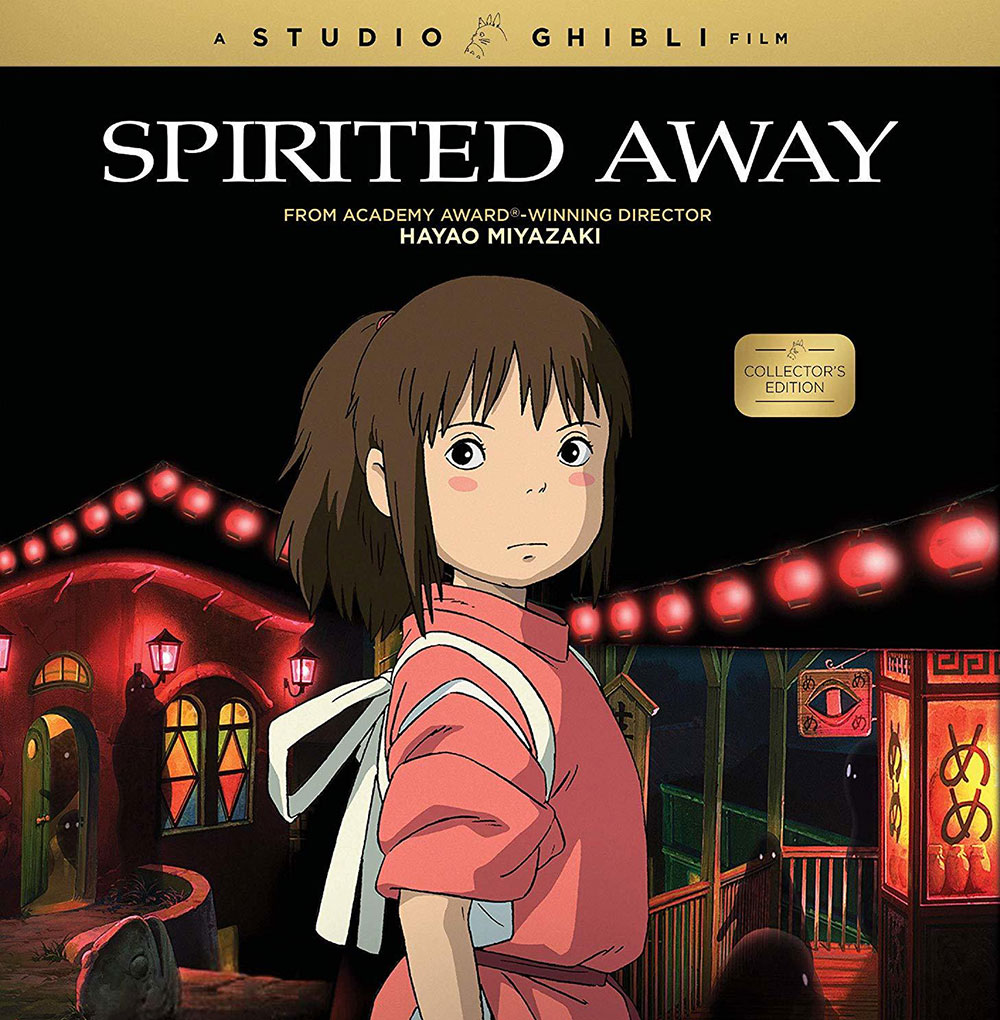