I have to wonder if George Lucas knew what he was creating when he came up with Star Wars? It’s been over four decades since audiences were first treated to Luke, Leia and Darth Vader. Time has shown that it’s one of those film franchises that has (and will) survive the test of time. Ironically as beloved as these movies are, the first three (Episode I, II and III) aren’t really that loved. It is because they weren’t good? I’d have to say so. But the franchise got a good kick in the right direction with Episode VII in 2015. And since then we’ve been treated to a couple of sub-brands with Rogue One in 2016 and now Solo: A Star Wars Story in 2018 (with Episode VIII in between). Are audiences getting too much Star Wars? Whatever the answer to that question is won’t matter as we’ve got an entire movie devoted to arguably the most popular character – Han Solo.

As is the case with most origin stories, it’s assumed that audiences already know the character. Let’s face it, if you don’t know who Han Solo (Alden Ehrenreich) is then odds are you’re probably not watching this movie. Truthfully, there’s nothing really complicated about this film. Yes, we all know it’s a prequel and there are about a dozen different references to the films that it assumes you’ve seen a dozen times. There’s the blatant: Han meets Chewie and some that left me scratching my head (that’s how he got the name “Solo”?). There’s no Death Star, no Darth Vader and unless I had my head in la la land, I didn’t hear anything about the force being with anyone (thank God). The film is about what Han’s character is all about: narrow escapes, loose alliances and unlikely losses all with a rag tag group that, come the end of the day, may or may not make it out alive. It’s got gusto, swagger and it actually feels like this one takes you on a ride. If movies are meant to be entertaining, then this, my friends, is a movie.

Truthfully, the film had a lot to live up to, and more to the point, Alden Ehrenreich. Talk about being dealt a losing hand. The guy’s been in a Sarlaac pit of judgment since the day he was cast. But, you know what, he pulls it off. There’s just enough of Harrison Ford in him, but he also manages to put his own spin on the character. This isn’t the guy who shot first at Mos Eisley, this is the guy he used to be. The same could be said for Donald Glover who puts his own turn Lando, the velvety-smooth “friend” who sold out Han and crew in Empire. There’s a lot to like about the film and I think that it holds a fitting place in the Star Wars pantheon.

A major studio (Disney). A major film (part of the Star Wars collective) and a top notch cast and crew (Ron Howard directing). On paper everything looks to be a go. And while I wasn’t totally disappointed by the way this looked on screen, it seemed to lack that touch that really set it apart from the masses. Detail is sharp, but not razor sharp, colors are bold and bright and everything seems to fit the bill. Perhaps I’ve watched too many 4K films (this is, obviously, the Blu-ray reviewed) and gotten used to HDR, but I just don’t know. The included 2.39:1 AVC HD encode certainly does the job, but a few times the CGI were a bit weird and had a blurred effect to them. Again, this isn’t anything to get worked up about, I suppose that I’d set the bar just a bit too high?

Disney’s Blu-ray and 4K titles are also a mixed bag lately with the Marvel movies getting some negative feedback from the true audiophiles out there. Like the video, there’s nothing particularly wrong with the way this sounds, but the film has been remixed for “optimal” home video use. Simply put, it’s just not the same as it was when/if you saw it in theaters. That said, surrounds offer ambiance, the LFE have plenty of chances to do their thing and vocals are crisp and clean. The soundtrack has some amazing moments, don’t get me wrong, but it just felt like there was an element or two missing.

This is a tough one. On one hand, it’s another Star Wars film, but there’s also “too much of a good thing” and “absence makes the heart grow fonder.” I enjoyed the film, the obvious nods to the Star Wars universe and liked seeing an origin story. I personally enjoyed the film. It was fun to watch and a marvel to behold. The cast clicks and helps make it what it really is – a Star Wars story. 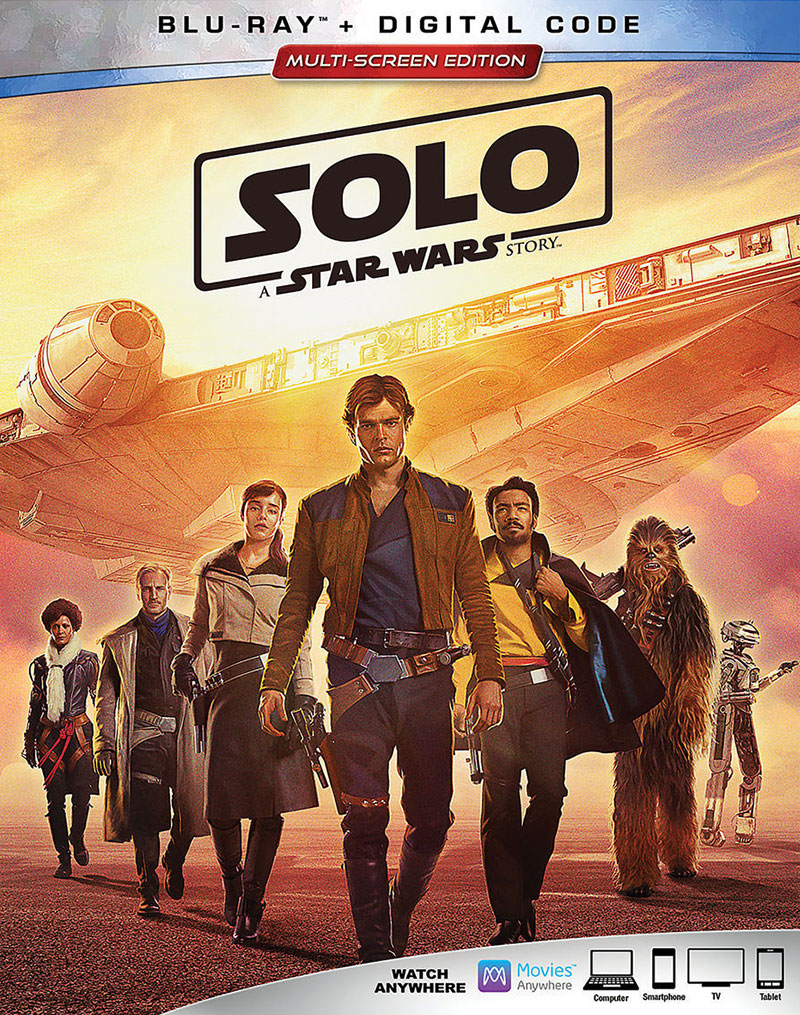