Arrow Video has a multi-pronged approach to film distribution. Arrow Video is the main label which releases their popular line of cult films. Arrow Films focuses on classic films and new releases deemed worthy of being part of the Films label. Arrow Academy is under the Arrow Films line, and releases films that are relatively unknown outside their respective countries. Arrow Academy recently have focused their attention on some of the early work of director Roger Donaldson who began his career in New Zealand by releasing two of his films. His first film Sleeping Dogs was the first film to really put New Zealand on the map – it was a long time before filmmaker Peter Jackson would help turn New Zealand into a film hub with his Lord of the Rings films and a personal favorite, Dead Alive. Having a night free to watch the film, I decided to check it out.

Based on the novel Smith’s Dream by Christian K. Stead, the film revolves around Smith (Sam Neill, in one of his earliest roles.) Smith finds himself ousted from his family when his wife Gloria (Nevan Rowe) leaves him for Bullen (Ian Mune – who co-wrote the screenplay.) At the beginning of the film, Smith packs up some of his things and leaves behind his wife and his two young children. He takes a car and drives until he sees a small remote island. He inquires about renting the island for a while so he can have some time to himself. For a bottle of scotch, they allow him to stay there. They also insist that he trade his car for their small fishing boat. Taking the boat to the island, Smith begins to fix up the tiny house on the island and enjoying his solitude. Unbeknownst to Smith, a totalitarian government has seized control of New Zealand. The government even executes some of their own soldiers in an attempt to frame the violence on revolutionaries. Marshall law is declared. Smith soon finds himself an unwitting revolutionary when his island is raided and he is held responsible for some revolutionary acts he had not committed. Given the prospect of confessing to crimes he had but committed, or being killed after a one-sided trial, Smith finds himself in a position where he must escape. Escaping his captors, soon Smith is forced into a role in the resistance.

This film was original enough in its approach that it held my attention. Some reviewers have complained that its approach suffers from a slower pace, but I thought that numerous scenes in the film were well-done and fairly realistic. The film has an exotic quality to it due to the expansive landscapes of New Zealand that I enjoyed. The film in many respects owes a lot to the work that Costa-Gavras did in his masterpiece Z.While this film does not hold a candle to that film, it is helped along by what it learned from that film. The scenes of rioting in the film are particularly well-done.

The film is helped along by a strong central performance by Sam Neill. Neill is a lot of fun to watch on screen and he does good work in this film. The film also has a fantastic brief performance from the late great American actor Warren Oates. Oates plays an American military man brought in to help eliminate guerillas. I love Oates in everything, especially Bring Me The Head of Alfredo Garcia, and he turns in a fine performance in his brief role.

Overall, this film helped to start New Zealand’s film scene and launched the careers of actor Sam Neill and director Roger Donaldson. The film is definitely a product of its time with political ideas that were more of a possibility at that time than they seem to be now. While the film is a little slow at times, I was pleased with it overall.

Sleeping Dogs is presented on Blu-ray with an MPEG-4 AVC encoded 1080p transfer in an aspect ratio of 1.85:1. The booklet says:

“Sleeping Dogs was digitally restored by the New Zealand Film Commission from original film elements. The film is presented in its original theatrical aspect ratio of 1.85:1, with original mono sound.”

I thought that the film looked pretty great. I didn’t notice any noise reduction and it seems that the film had been preserved well over the years. Fans are going to be excited to see how great it looks in high definition. There is some evident specking, but it is just not-picking to complain about such a good transfer.

The audio treatment of Sleeping Dogs is solid. There are two tracks to choose from, an LPCM 2.0 track and 5.1 DTS-HD Master Audio track. I did not detect a huge difference between the two tracks, but they both sounded very good to me. There is not much directionality, but the film still holds its own as far as depth of sound. The film really benefits from the 5.1 track during the riot scenes in the film. Arrow has done their due-diligence and made sure that the audio is very clear and I did not detect any noticeable hiss. Clarity on the track is superb. Fans should be happy with the results here.

Sleeping Dogs is an interesting political thriller. The film suffers only slightly from some pacing issues. It is definitely reflective of the time in which it was made because the takeover that takes place would be much more difficult to pull off now. Overall, I enjoyed the film. Arrow have provided a great looking transfer from the New Zealand Film Commission and some excellent supplements. Fans of the film will want to pick up a copy and newcomers should find plenty to enjoy here. 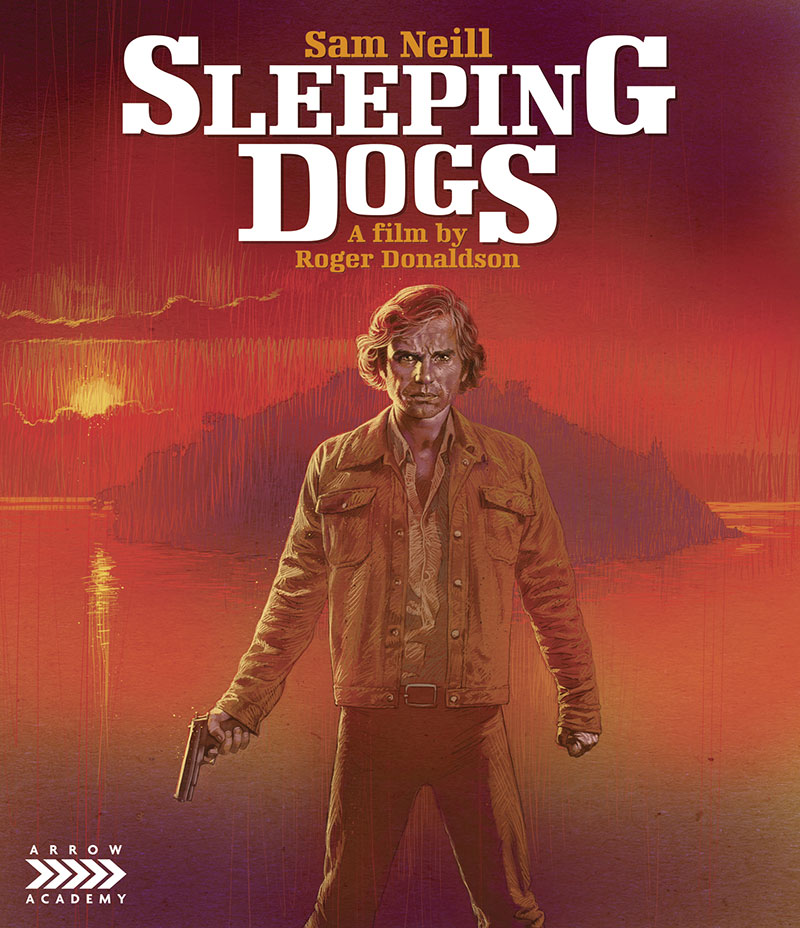