Spring,1976 –  in the small town of Tarkers Mill. As the film begins, Arnie Westrom gets killed by a werewolf on a full moon night. He is decapitated but the town believes that he fell asleep on train tracks. They are none the wiser that a werewolf is stalking the town. Jane (Megan Follows) and Marty Coslaw (Corey Haim) are brother and sister. He is paralyzed and he rides around in a motorized wheelchair that his Uncle Red (Gary Busey) made for him. They jokingly named it the silver bullet. Marty is friends with a girl named Tammy. After a town festival, a suicidal woman is killed in her home by the werewolf. The town believes there is a maniac on the loose. The next murder takes place when Tammy’s drunk father is killed in his greenhouse. After that murder, a friend of Marty named Brady is killed, sending the town into a panic. Brady’s father appeals to the town and demands “Private Justice!” Joe (Terry Quinn) is the local sheriff that tries to keep everybody settled down. There is a local preacher named Reverend Lowe (Everett McGill) that tries to stop the men from becoming a mob. He is also suffering from terrible nightmares. When Marty sneaks out of his house, he plays with some fireworks on a bridge and manages to blind the werewolf with a rocket. Jane begins to look for who in town is missing an eye.

I was pleasantly surprised by Silver Bullet. While the film is not very scary, it is suspenseful as the main characters are put into a dangerous situation in the final third of the film. The film also has some tongue in cheek dark comedic elements that made me laugh. The prime example of this would be the sequence involving the hunting party that is directly followed by a funeral sequence. The abrupt transition made me laugh. The writing of the film is capable, if a bit over-the-top. Stephen King knows that the premise is absurd, but he uses the premise to paint a vision of a small town in crisis. This is better executed than I expected. Most impressive is that King adapted this from a a project that was essentially a calendar he worked on called The Cycle of the Werewolf which he had developed into a short novel. While this writing can’t compete with his more mature works like Carrie, The Shining, or The Shawshank Redemption, it was fun to see him craft a story that is fun and surprisingly clean.

The actors in the film are well cast. Corey Haim was pretty good as a kid actor and he is very likable in the role of Marty. Gary Busey is great as Uncle Red. I love that crazy lightning-in-a-bottle style of acting that Busey can bring to a project. This is a good example of when it works. The best acting in the film is done by the great Everett McGill. I love McGill’s work on Twin Peaks, but he does a lot with his role here. I don’t think the final third of the film would work without his performance.

Now – there are also things this movie does not do well. For example, the wheelchair transitions of Marty getting into the wheelchair don’t work, so why did the editor keep in all three? It is just totally obvious that Corey Haim is able bodied. There are also some sequences where Marty rides on his wheelchair incredibly fast – even a chase sequence. These scenes are pretty ridiculous and made me laugh, but I could easily see someone else shrugging off the movie because of them.

The film is helped along by the steady direction of Daniel Attias. He gets pretty good performances out of all the actors and made the material work better than it had any right to work. The score by Jay Chattaway is another great aspect of the film. It is a great synth driven score that reminded me of some of the great Italian giallo scores. I enjoyed it.

Shout!Factory presents Silver Bullet with a good looking AVC-encoded image in 2.35:1 aspect ratio. The film is visually enjoyable thanks to the strong Italian cinematographer Armando Nannuzzi. This visual presentation is good, but it is a little bit softer than I anticipated at times. Fans should be pleased but may want to temper their expectations for simply a good-looking presentation rather than a great one.

The audio presentation on Silver Bullet is effective. The film features a DTS-HD MA 2.0 track that preserves the original sound design well. While this is not as immersive as some surround tracks, the film benefits from an excellent score by Jay Chattaway. The music in this film is great. Fans will be happy unless they were expecting a surround remix.

I enjoyed Silver Bullet. The film definitely has its failings, but I was won over by the well-realized small town and the numerous enjoyable performances in the film. The film was bullied by critics when it was released, but the final third of the film is surprisingly effective. If you go in with low expectations, it may win you over. Shout!Factory has provided an excellent array of supplements and the film looks pretty good. Fans will definitely want to add this to their wish list! 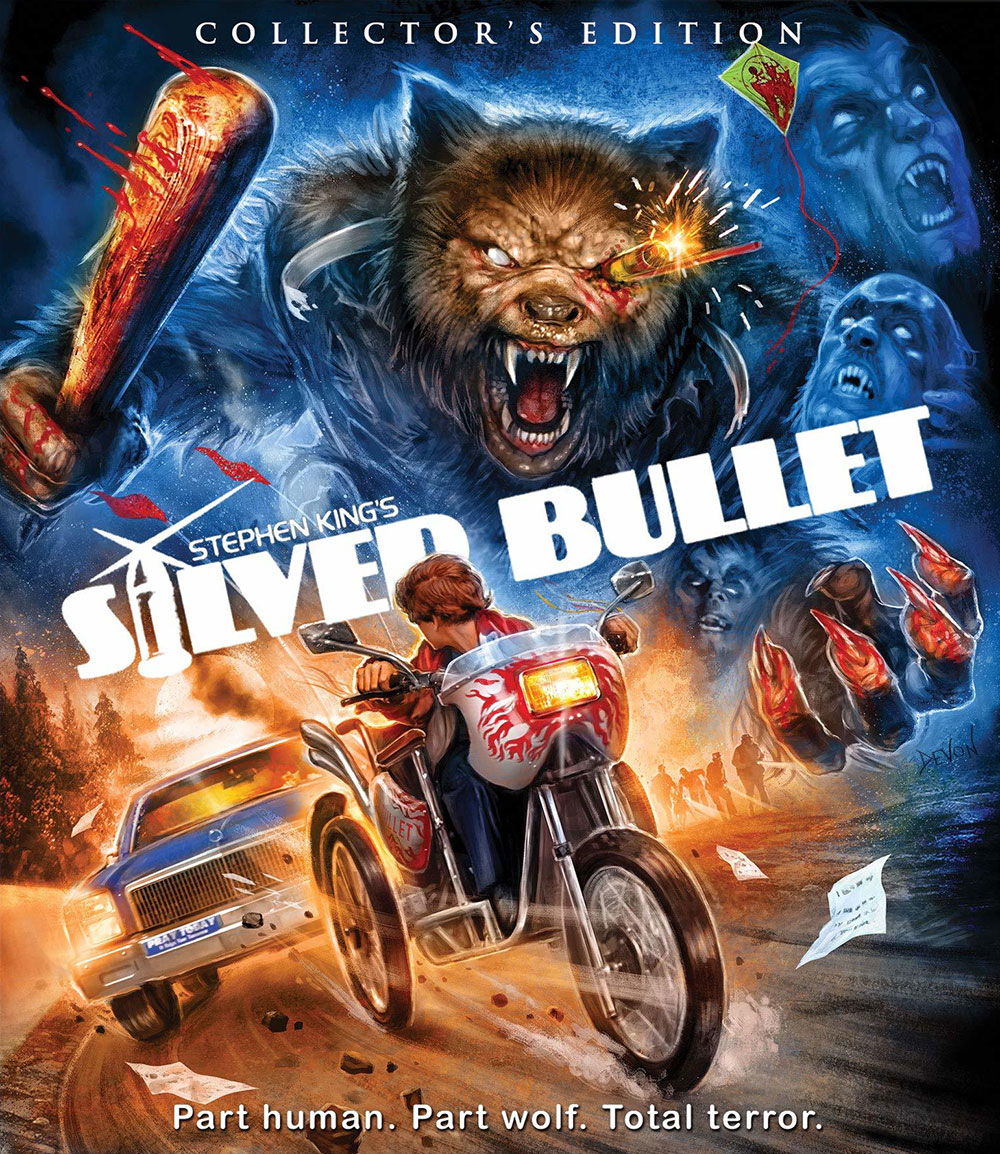