Our country is rapidly changing. The drug war is a very divisive issue. Regardless of your perspective on the issue and whether or not you support the war on drugs, the reality of the situation is that there are thousands of casualties from the war each year. Sicario attempts to show this issue in the border towns of Mexico and America which have been impacted the most. In particular the film focuses in on Juarez and El Paso, two of the cities suffering the most from the drug trade’s violent sprawl. The screenwriter and director do a capable job of taking us into territory that can only be looked at as a war zone in our midst.

(Warning: The opening scene is so fantastic, that I might recommend skipping my summary and just reading the next paragraph. It would be impossible to describe anything in the plot while omitting this scene, so consider yourself warned.)

The film begins in Phoenix, Arizona, with by-the-book cop Kate Macer (Emily Blunt) arriving via an armored vehicle to a stash house that may or may not have hostages and narcotics. The armored vehicle smashes through the wall of the house and the officers begin searching each room. As Kate rounds a corner, a man attempts to shoot her with a shotgun. She kills the man, but his shotgun blast reveals that the house is littered with bodies stuffed into the walls. When the forensics crew comes to exhume the bodies and examine the crime scene, they accidentally set off a bomb and two officers are killed in the blast. Kate is called upon to speak with her commanding officer and is interviewed by Matt Graver (Josh Brolin.) She is offered a spot on his team to help track down the men that caused the bombing. Kate agrees to join the team, and is told they will be flying to the El Paso area. On the plane she is struck by an out of place South American man wearing a white suit named Alejandro (Benicio Del Toro.) Upon the plane’s arrival she realizes that she has landed in Mexico and that the men she is traveling with have no plan to follow any set protocol to achieve their means.

Sicario is one of the finest pictures I have seen all year. It is a beautiful balance of amazing performances, intense action, an air of mystery, and political relevance that is hard to beat. Benicio Del Toro is fantastic in the film, saying more with just facial expressions and looks in his eye than most actors can say in a monologue. Emily Blunt continues to prove herself to be up to the task of playing fantastic tough female roles. If there was an Alien reboot she would make a kick-ass Ripley. Josh Brolin is perfectly cast as Matt Graver, exuding confidence and humor while working the angles of a war that he fully comprehends.

The direction by Denis Villenuve is concise and well executed. This marks his second film to use legendary cinematographer Roger Deacons, whom I would argue is one of the, if not THE, best cinematographers working today (No Country for Old Men, Skyfall, The Shawshank Redemption, Revolutionary Road.) The film maintains a level of realism that will leave you thinking about real world issues afterward. The film is also helped along by a very jarring and competent score by Johann Johannson. I firmly recommend buying this film and adding it to your collection.

Lionsgate did an extremely capable job on the brand new digital transfer of the film. With a ratio of 2.40:1 and MPEG-4 AVC encode, depth and clarity are excellent, with the shadows and grain of the film fully present. This film is probably one of the best looking films of the year, and the transfer is fantastic. The film has a very unique look, due to the intense climate of deserts and urban decay in colorful Mexican pastels. Roger Deacons is one of my favorite cinematographers of all time, and he does might disappoint in this film. I can’t think of any noticeable flaws in this transfer.

This is a very strong Dolby Atmos True HD 7.1 track, managing to use all of the surround channels effectively, sometimes to jarring effect. The film has most characters speaking to each other in normal voices and the action scenes are typically carried out with whispers, making the noise of an explosion or gun discharge that much more jarring. This works for the film, but I had to turn it up and down numerous times while my baby was asleep in the next room! The film has a very competent score by Johann Johannson that helps to keep the intensity levels of the film high. I think certain sequences of this film are truly demo quality. Great stuff.

The special features run just under an hour, but are actually pretty interesting.

Sicario is one of the best pictures of the last year, and one of the best pictures I have seen this year, period. It is an incredibly intense and relevant film pulsing with frightening realism. The folks at Lionsgate have provided a fantastic transfer of the film with a truly robust Dolby Atmos audio presentation. The supplements are interesting, but I wish they could have been longer. Even with the supplements not going as deep as they could have, I still found them enjoyable. In spite of them losing pints in that department, I still give this release a perfect score based on the excellence of the film and technical merits alone. Go out and buy this films. People will still be talking about this one in twenty years. 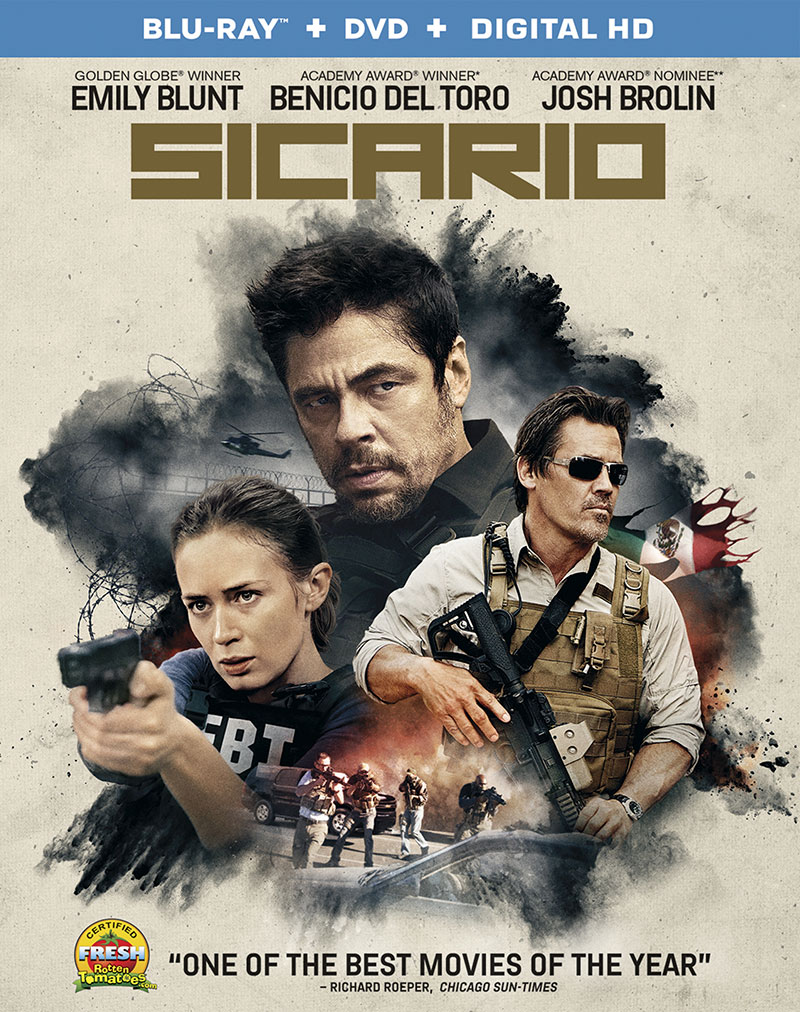