MVD Rewind has quickly established itself as one of the best places to find a certain type of movie. The goal of the film line is not purely to focus on films that are certain age, but to achieve a certain feeling. The films are put into nostalgic looking slip covers that are reminiscent of VHS tapes from a video rental store of yesteryear. The look of the film line to the releases they choose is completely intentional. They focus on films that harken back to the golden age of straight to video releases. Their film line has released a strong lineup so far with films ranging from Lionheart to Attack of the Killer Tomatoes. I love all the street fighting films of the early Nineties, so I was excited when I saw that the 1993 film Showdown would be released in its original R-rated version. I checked the film out as soon as I had some down time.

At the beginning of the film, police officer Billy (Billy Blanks) arrives with his partner (Michael Genovese) at a party that has received a noise complaint. Inside the party, Lee (Patrick Kilpatrick) and his brother are aggressively pursuing attention from a girl and fighting anybody who tries to stop them. Billy’s partner recommends that he take in his service pistol, which Billy typically avoids carrying. Billy walks into the party and is accosted by Lee and his brother. Lee’s idiot brother tries to grab Billy’s service pistol which falls on the ground. Billy kicks the brother and the brother accidentally breaks his neck when he falls over. Consumed with grief, Billy quits the service. At a nearby school sometime later, Kenny (Kenn Scott) arrives halfway through the school year. His mom moved him out west looking for a job just months before he would have finished his senior year in Kansas. Kenn feels like an outcast immediately. The school is tough with kids skateboarding, brandishing guns, and spray painting graffiti much to the chagrin of Vice Principal Kowalski (Brion James.) To make things worse, Kenn accidentally talks to the beautiful girlfriend of the school bully Tom (Ken McLeod,) Julie (Christine Taylor.) Tom knows karate and has been trained by his evil sensei Lee. For talking to his girlfriend, Tom punches Ken and warns him to never talk to his girlfriend. Ken gets a small amount of relief by befriending the nerdy Mike (John Asher.) When Ken talks to Julie again, Tom and his lackey chase Ken into the gymnasium to beat him up. Luckily, school janitor Billy intervenes and beats up Tom and his friend. As rumors spread that Ken beat up Tom, Ken must prepare for the fight of his life. Billy begins to train him while Ken finds out more about the underground fighting matches that Tom participates in.

So it should be pretty obvious from the plot summary above that this film bears a striking resemblance to The Karate Kid. It is even referenced in the film at one point by Ken as he trains with Billy. This does not in any way hamper the enjoyment of the film. For my sensibilities, it made the film so much more enjoyable. I was laughing like an idiot as they liberally stole plot points from that other film and mixed in some plot points from movies like Bloodsport.

Showdown is almost perfect in its ability to draw nostalgia from a viewer. The film features two prominent people that anybody who grew up watching television in the early Nineties will remember. John Asher was one of the stars of the USA Network television show Weird Science that everybody my age watched growing up. Christine Taylor was the hot chick on a Nickelodeon television show called Hey Dude! that was also very popular at the same time. Add in Billy Blanks from all those Tae-Bo infomercials that ran in my teenage years, and the film is pretty much perfect.

One thing worth pointing out – most of the film’s fight choreography is not going to blow anybody’s mind. While the final showdown is pretty badass, several of the fights feel like the actors move too slowly. For myself, this did not detract from my enjoyment of the film, but it is worth noting. These fights are not up to early Van Damme level but are better than late Seagal level of this scale helps explain what I mean.

This movie made me smile from the beginning to the end. I appreciate MVD Rewind for releasing the film in its original R-rated version. It is also worth pointing out, that this film, despite its rating could easily be watched with your kids. I have no idea what they found so objectionable as to earn it that harsh rating. This film is a great slice of early Nineties street fighting goodness. I give it two cheesy thumbs up to the sweet sounds of the montage song used in the film.

MVD Rewind have provided a good-looking transfer of the film in 1080p using an MPEG-4 AVC codec. The film is presented in the aspect ratio of 1.78:1 aspect ratio. I thought that this transfer looked pretty great. The film is not a cinematographer’s dream, but the Blu-ray presentation looks nice. Fine detail is pretty good with some softness occasionally popping up like you would expect from any film made in 1993. There is some light specking in some scenes but I can’t imagine anybody complaining about the way this movie looks. Overall, I think fans (like myself) will be happy to see the film in high definition.

MVD Rewind has provided English Dolby 5.1 surround and English 2.0 stereo tracks. The 5.1 track sounds pretty good, with the great montage songs coming through the speakers nicely. The surround effects are not extremely directional, but I felt like they enhanced the overall feel of the film. The stereo 2.0 track sounds good, but personally I liked the 5.1 track better. A good track overall.

Showdown is an awesome trip down memory lane that made me remember exactly why the early Nineties were so awesome. MVD Rewind have gone above and beyond with over two and a half hours of new supplemental interviews just for this release. Fans are going to love it and newcomers that enjoy these types of films should consider a blind purchase. 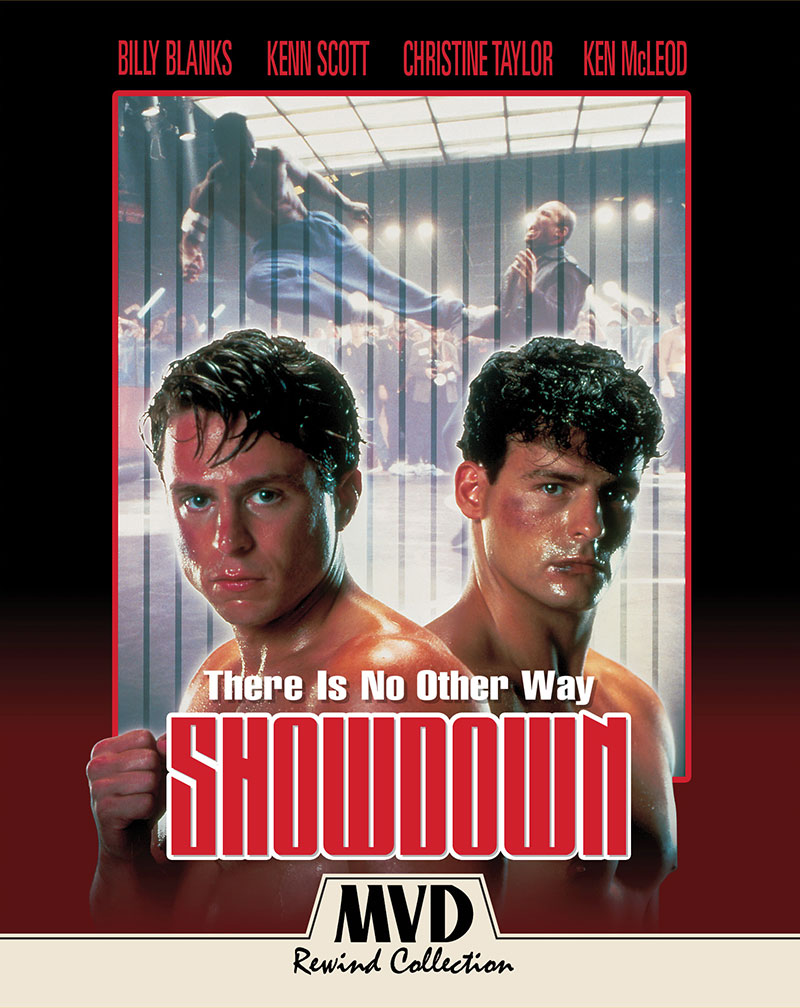