I try to keep a pretty close eye on what Twilight Time puts out. I follow them on A man sweeping a courtyard finds a dead body. The man calls for an ambulance. At the morgue the body is pronounced dead, but the man’s consciousness lives on. They tag the body despite it feeling warmer than usual. The man remembers that he is Gregory Moore, but what else? The film flashes back. He was a journalist from America living in Prague before his death. Gregory goes to the train station and picks up a girl named Mira Sherkova. They plan to eventually go to London together as long as she can receive the proper visa. After visiting a party together, Gregory leaves suddenly to follow up on a potential lead. The lead dries up and he returns to his apartment. Mira seems to have disappeared from Gregory’s apartment without anything that she owned. Gregory feels convinced that she had been abducted because she would not have left without wearing clothes, shoes, or her purse. He notifies his friends and then the authorities. The authorities seem apathetic. They discover a body near a canal, but it is not Mira. He takes a friendly journalist named Jessica with him to investigate the case, meeting dead ends at every turn and arousing the anger of the authorities.

Short Night of Glass Dolls (which was originally titled Short Night of Butterflies which makes more sense) is a fantastic and strange film. It has such a unique sensibility and uses a flashback technique that is as effective as it is inventive. In the film a body in a morgue claims to be alive and it flashes back and forth between the body in the morgue worried that people around him think he is dead and back to the events that led to the predicament. It lends to the  film a claustrophobic feeling and also makes the narration of the film feel undependable. I kept thinking of the film Jacob’s Ladder as I was watching the film even though this film does not rely on traditional horror imagery. In fact, it is not a bloody affair and aside from one scene is not extremely exploitative. This film is a mystery film with giallo touches. The finale is intense and wonderful and one of the biggest freak outs I have seen in a while. There is definitely a great payoff for the film that elevates the film to classic status in my opinion.

The stars of the film handle their jobs well. Jean Sorel (sort of a poor man’s Alain Delon) is great in the lead role. Barbara Bach who would later become a Bond girl does a capable job in her brief role. The real star of the film is the cinematography and music. The cinematography by Giuseppe Ruzzolini looks fantastic. Aldo Lado does a great job in the director’s chair here and produced a truly unique film. With help from a great score by one of my favorite duos – Ennio Morricone and Bruno Nicolai – the film becomes an experience.

Twilight Time have provided an excellent transfer of the film using an MPEG-4 AVC codec of a brand new 2K restoration from the original camera negatives. Shot in Technicolor, this film is visually very appealing due to the exotic and dreary nature of filming in Prague. Cinematographer Giuseppe Ruzzolini films largely in wide shots that fill the screen with a lot to look at. The transfer is very detailed aside from some occasional scenes that were intentionally soft focused. This transfer stacks up well with some of the great giallo releases the we have seen recently from Arrow. This gets my full approval!

Twilight Time has provided both an English and Italian DTS HD-MA 1.0 Track. I listened to the film intermittently in both languages and found that they both held up well. I personally preferred the Italian track, but the English track sounds pretty good also. The score from Ennio Morricone with the assistance of Bruno Nicolai is really awesome. That is one of my favorite musical duos and they delivered the goods here. Obviously with these tracks being Mono tracks the range is somewhat limited. The dialogue is crisp and clear but I did notice some hiss on this release. This is a solid effort and fans are not likely to complain.

Short Night of Glass Dolls is a unique and fantastic little film. Part mystery, part thriller, part psychedelic giallo, the film is definitely its own thing. I really can’t wait to show this one to friends. This was a really good discovery for me, and I love that Twilight Time chose to release it. The audio commentary by David Del Valle and Matteo Mollinari is also excellent. Highly recommended. 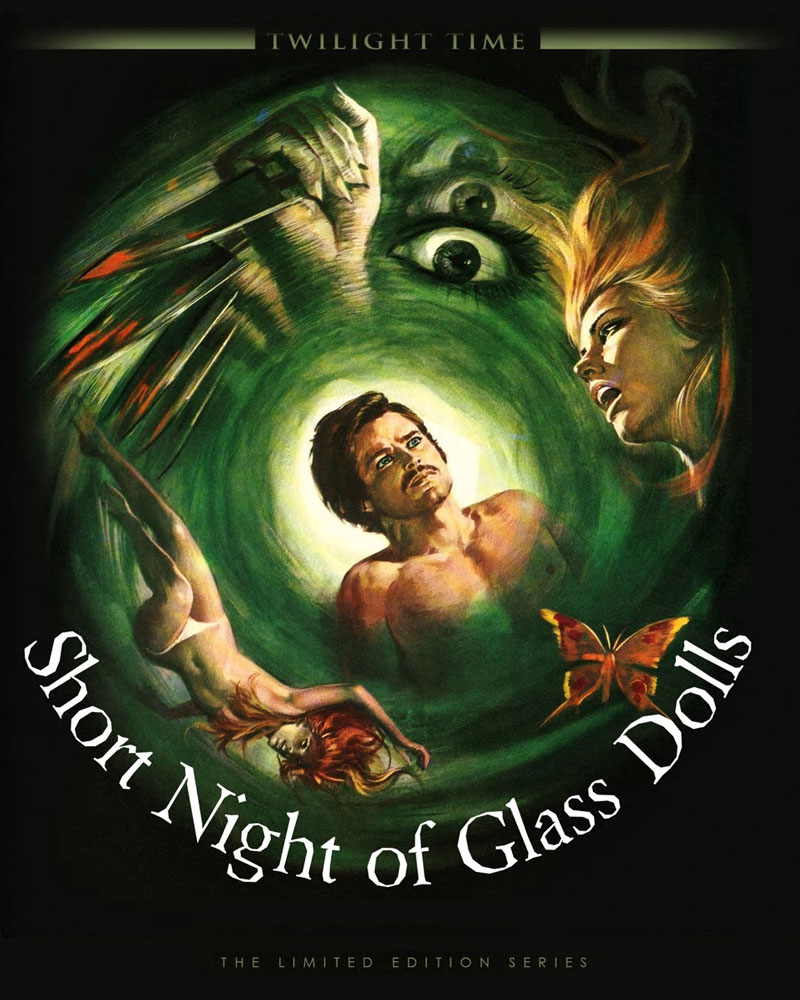