Tanya Roberts stars as our title character Sheena in a pretty decent little flick from the 80’s. After her parents are killed while on safari, Sheena is raised by the mystical witch woman of an African tribe. We see a bit of her early life before Sheena grows up and has made quite a life for her out in the wild. We learn later in the film that she can communicate with animals. This helps her later on in the film. One can essentially sum up this film by thinking of it as a female led version of Tarzan. I’m not too familiar with Tanya Roberts, but she does a fine job in the lead. Actually, with a lesser actress, the film probably would’ve been even more forgotten.

There is a bit of plot going on with Sheena which involves an African prince who is trying to assassinate a King so that he can get to the titanium on the land. Then we’re introduced to a reporter Vic Casey (Ted Wass) and his cameraman Fletch (Donovan Scott) to do a story on the former football player turned prince. Before long, Vic begins spending time with Sheena and the two eventually fall for each other. Things build rather predictably towards an action filled climax where Vic (as well as the animals) help Sheena to fend off the Prince from garnering control of the titanium.

Sheena is a busy film with a lot of things happening even if the plot is just sort of thrown in. I enjoyed the scenery and I’m not just speaking of Tanya Roberts, though she looks amazing in this. It also has plenty of action, but I admit that the film started to feel long and repetitive after a while. There’s such a seriousness from all of the actors that you almost wish the film embraced the campy vibe. I feel it would’ve been better for it as it’s all just a bit too silly to become too invested. It should also be noted that despite the PG rating, there’s a full nude scene featuring Roberts taking a bath. This sort of thing most likely wouldn’t fly at all today, but parents should still be advised. While I don’t feel the need to return to this film, the affordable price tag should appeal to fans. The retro-style VHS slipcover is also neat if you’re into that sort of thing.

With Africa at its disposal, the film does have some amazing shots in it. There was a bit more grain at times than I would have liked, but overall this is a pretty solid transfer all things considered. The image is AVC encoded with a 2.35:1 ratio. Details are pretty good and there’s a nice overall quality. While not a perfect transfer, it gets more wrong than right.

The DTS HD 2.0 track works well enough, without ever feeling too restricted. The roar of the wild as well as the action scenes have a strong impact to them. Vocals were crisp sounding with no obvious need for improvement. It fared much better than I would have thought, making for a pretty engaging listening experience.

Sheena is a decent little flick, but not something I need to see again. More than anything else, I enjoyed Tanya Roberts as the title character. The film is a bit too serious and overly plotted (especially for a film like this) at times, but it should please fans who crave a female led adventure film. The disc is passable, but there are no supplements to speak of. The big selling point here is the retro slipcover which is pretty neat. Parents be advised that despite the PG rating, the film does in fact show Roberts in her birthday suit. For fans, have at it. All others should seek a rental before purchasing. 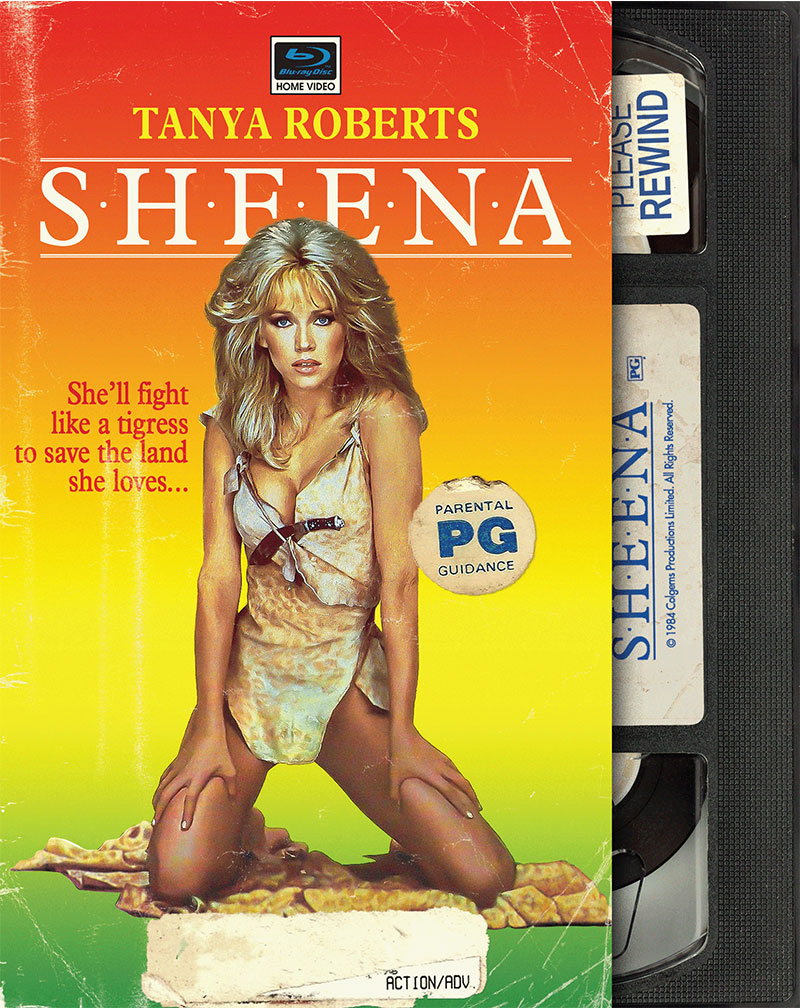