The best way to avoid a shark attack is:

You’d be surprised how many people don’t answer “don’t go in the water.”

The ocean takes up nearly 75% of this place we call Earth and in the water there are sharks. Lots of them. And for anyone out there that’s seen the movie Jaws, a lot of people (myself included) simply will not go into an open body of water. Now, granted, the odds of a shark attack really aren’t that high. We hear about them all the time, of course, but they are few and far between. Still, it’s the threat of them that keeps a lot of folks out of the water. Well that and dying in the mouth of a Great White shark.  But moving forward, films about sharks are generally spot on. One of my recent favorites, aside from Jaws, is Deep Blue Sea. That took the fear one level deeper (pardon the pun) in that the sharks were genetically engineered and “smart.” What’s worse than a natural killing machine? One that can learn. And now with The Shallows, we’re once again reminded of why we should’t go in the water.

Nancy (Blake Lively) has dropped out of Medical School. She heads to a Mexican secluded beach to pay homage to her mother and, once there, catches a few waves. Her fellow surfers head in for the day but she decides to catch “just one more” before she calls it quits. But, as fate would have it, a shark decides to try and snack on her leg. Hurt and bleeding, Nancy makes her way to an elevated rock, but with no food, water and her deteriorating condition – it’s only a matter of time before she dies. Flash forward to the next day and her surfer friends are back, only to be eaten by the shark along with a drunk who just happens to paddle out to procure her surf board. Big mistake.  Nancy is running out of time and her options are limited. What’s a girl to do?

The plot of a movie doesn’t have to be complicated to be effective and this is evident here with this simplistic turn of events. The movie isn’t long, just 89 minutes and Blake Lively has a lot to carry with it being her on screen for a majority of that time. Not that I’m complaining, let’s face it – she’s not exactly hard on the eyes. Still, she manages to convey the range of emotion and does it convincingly enough. Now as for the movie itself, was I scared? No. But I’d long ago made up my mind to not go in the water and this movie only solidified it further. I’m reminded of a feature on the Deep Blue Sea DVD in which actor Thomas Jane said “I had no idea how many sharks were in the water until I made this film. I won’t go in the water again. There’s a lot of them out there.” Ok, maybe that’s paraphrased a bit but the general message is there.  In a world filled with superheroes and countless TV remakes, it’s nice to see a simple movie that plays on one of our most primal fears.

So tell me again what your answer would be to the question I asked above?

Sony’s Ultra HD/4K titles look good and what better way to showcase the beauty of a film than in 4K! Shown in a 2.39:1 HD transfer, I couldn’t really find a fault in the film. Granted it’s a new film, so finding one would be difficult, but what really got me was the range of colors (HDR) that made it visibly different than its Blu-ray counterpart. Certainly the grains of sand, the blue water and the flesh wounds all had their moments, but aside from the detail we see, it really was a beautifully shot film. We see the dried blood on Lively’s feet, the wound, the matted hair and the definition in the crashing waves. I was really hard-pressed to find a fault. This is one of the best-looking live action films I’ve seen on the Ultra HD/4K format.

The Dolby Atmos soundtrack is a bit underused here, but it does have a few chances to flex its muscle. The film, by and large, is an internal struggle and thus doesn’t rely on ambiance to convey that message. Granted, there are some waves crashing, and little things here and there that make for an interesting mix. Vocals are sharp and crisp, though there’s not a lot of dialog going on with just a single cast member. I don’t want to say that an opportunity was missed here, I just think this isn’t the kind of movie that really needs to rely on a next generation sound format.

While Jaws is the more superior film when it comes to shark attacks, this one isn’t that bad. Most films dealing with man vs. nature have an element that’s always intrigued me and it’s evident here. Blake Lively shows she’s more than just a pretty face and manages to carry this film from beginning to end. The 4K presentation is beautiful, with a robust sound mix and a smattering of extras that make for a nice package. 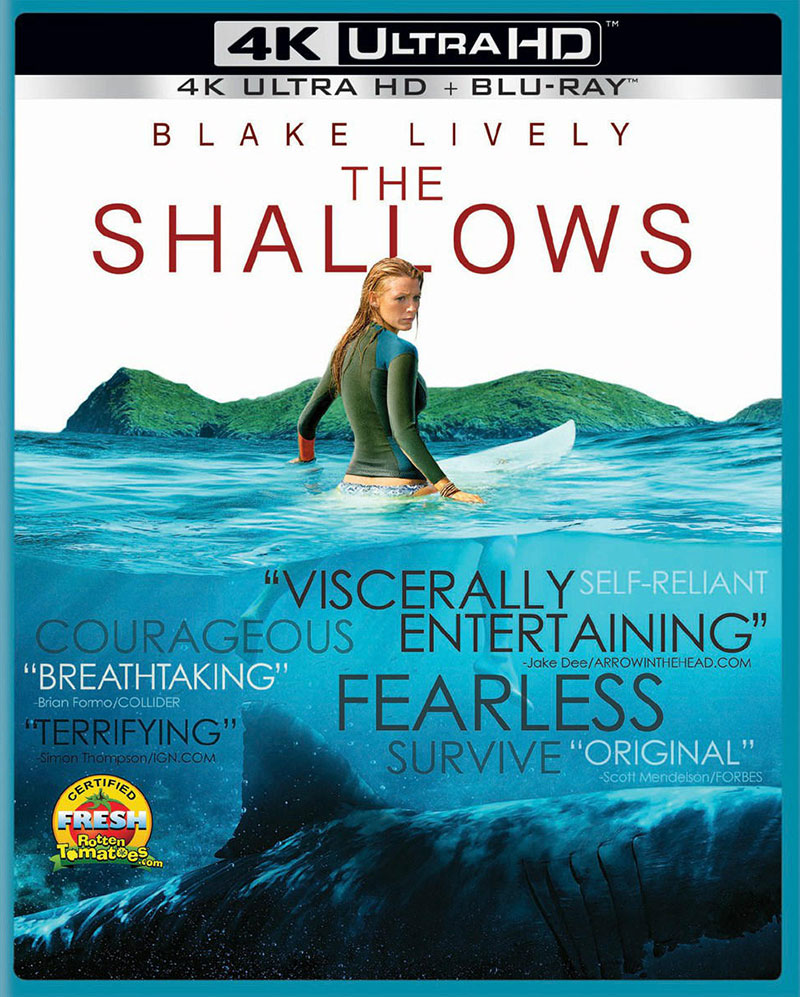