Shout!Factory’s Select line has some of the label’s most enjoyable titles. I am personally a big fan of Eighties action films so the Shout Select line has been right up my alley with collector’s editions of films like Road House and Red Dawn. When Shout!Factory recently had a sale I purchased some titles that I was interested in checking out. Shakedown was a blind buy for me. I purchased it when I saw that it starred Peter Weller and Sam Elliott. A movie with Robocop and Road House’s Wade Garrett? For me, that was enough of a selling point. I sat down last night to check it out.

As the film begins, a drug dealer named Michael Jones (Richard Brooks) is approached by a prospective customer in Central Park. Soon cops and an ambulance arrive on the scene. The drug dealer is injured and the prospective customer, a cop named O’Leary, is dead. Legal aide Roland Dalton is about to end his tenure before taking a big job on Wall Street. His fiancée’s father is landing him the job in a week. His fiancée also doesn’t understand why he likes Jimi Hendrix. At a lunch meeting with his pal Sean (JC McGinley) he looks through the cases that he will plea down. Roland decides to take a closer look at the case involving the crack dealer and the cop. Behind bars, Michael explains that he was attacked by a blue jeans cop and that he had killed the cop in self defense thinking he was a vigilante. After the fact, Michael figured that the cop must have been wanting a piece of his action. Across town, narcotics cop Richie Marks (Sam Elliott) sleeps at night in a movie theater where he keeps a toothbrush. Roland approaches him regarding the blue jeans cop and Richie explains that a blue jeans cop is a cop that finally decides to steal some money to get some designer jeans. Richie explains that if they follow this trail it will expose a lot of corruption in the force. On Richie’s next drug bust with his fellow officers, Richie is sent ahead to book the drug dealer, Nicky “N.C.” Carr (Antonio Fargas) while Rydel (Larry Joshua) and his crew take care of the evidence. N.C. is quickly booked and makes one million dollar bail immediately. Richie, feeling suspicious of how the bust went down, investigates O’Leary’s house. He discovers a Porsche in O’Learey’s garage under a tarp. While walking back from work, cops circle around Roland as a warning to not dig deeper. To complicate matters, Roland’s former lover is the prosecutor on the case. Roland and Richie team up to take the corrupt cops led by Rydel down.

This movie is an absolute blast. Fans of Eighties action films need to add this into their rotation. It has everything you can want:

This is all on top of the joy of getting to watch Sam Elliott and Peter Weller in the lead roles. James Glickenhaus directed and wrote the film and has made a fan out of me with this movie. It has a lot of great ideas. In the supplements he talked about how his films are his attempts at “faction” – not the truth, but borrowing ideas from reality and things that could happen. This makes for an interesting film. That said, the film still definitely will need you to suspend your disbelief like other action films – especially in the ending sequence.

One of the best aspects of the film is that it catches New York City before it got cleaned up by Giuliani. The film shoots some amazing action scenes on 42nd street that could never be filmed today. The action in the film is great – full of practical stunts done by professionals. I wish the industry would turn back towards more practical effects and stunts. It just looks better.

Basically, I loved this movie. It’s a blast from start to finish.

Shakedown arrives on Blu-ray with a 1080p MPEG-4 AVC encoded image in 1.85:1 aspect ratio. I was really impressed with the transfer of the film. Fine detail is great and the film is not persistently grainy or soft. For a film from the Eighties, I thought this film transfer displayed less soft focus than most. The movie benefits from some well done cinematography by John Lindley that really shows off the New York locations of the film. Fans will be very pleased with how the film looks on Blu-ray.

Similar to the video, the audio presentation on Shakedown is great. The DTS-HD MA 2.0 stereo track has a lot more kick to it than you might expect. Obviously, dynamic range is somewhat limited, but the track uses the sound field well in the mix. With songs from Jimi Hendrix and Red Hot Chili Peppers and others interspersed into the film, there is a lot to enjoy here. This movie is pretty loud and has some crazy action which I think  the track handles well.

Shakedown is a great action film. I had a lot of fun watching Sam Elliott and Peter Weller fighting corruption in New York City when it was still a scary place. Shout!Factory has given the film a good transfer and some good supplements. Fans should upgrade immediately, and newcomers should feel comfortable with a blind buy. 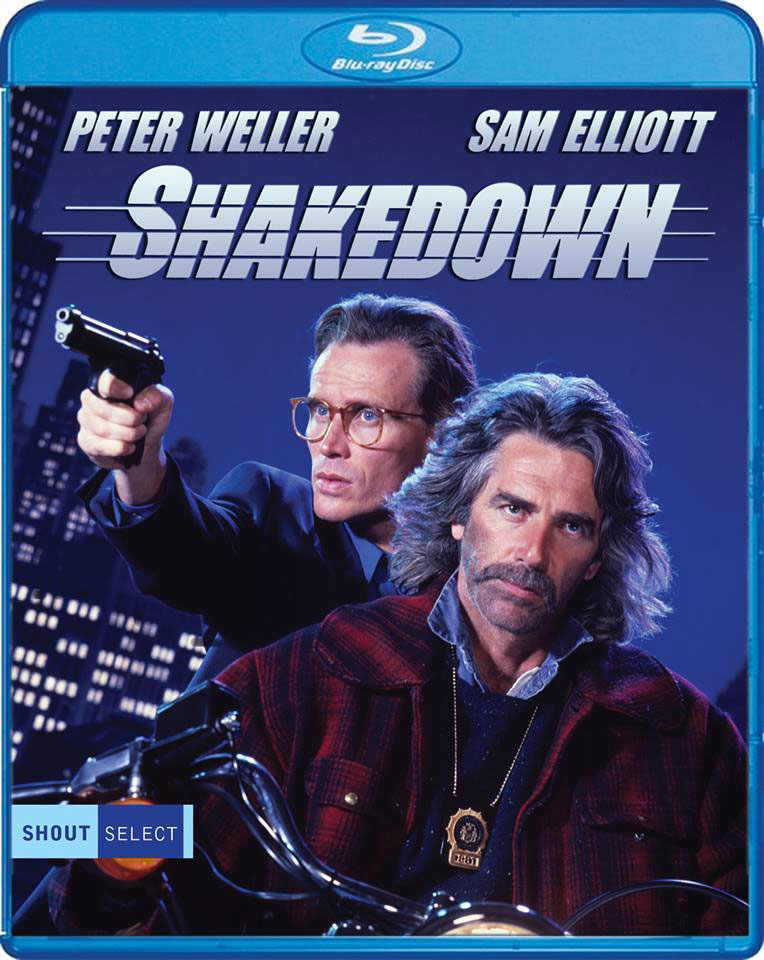