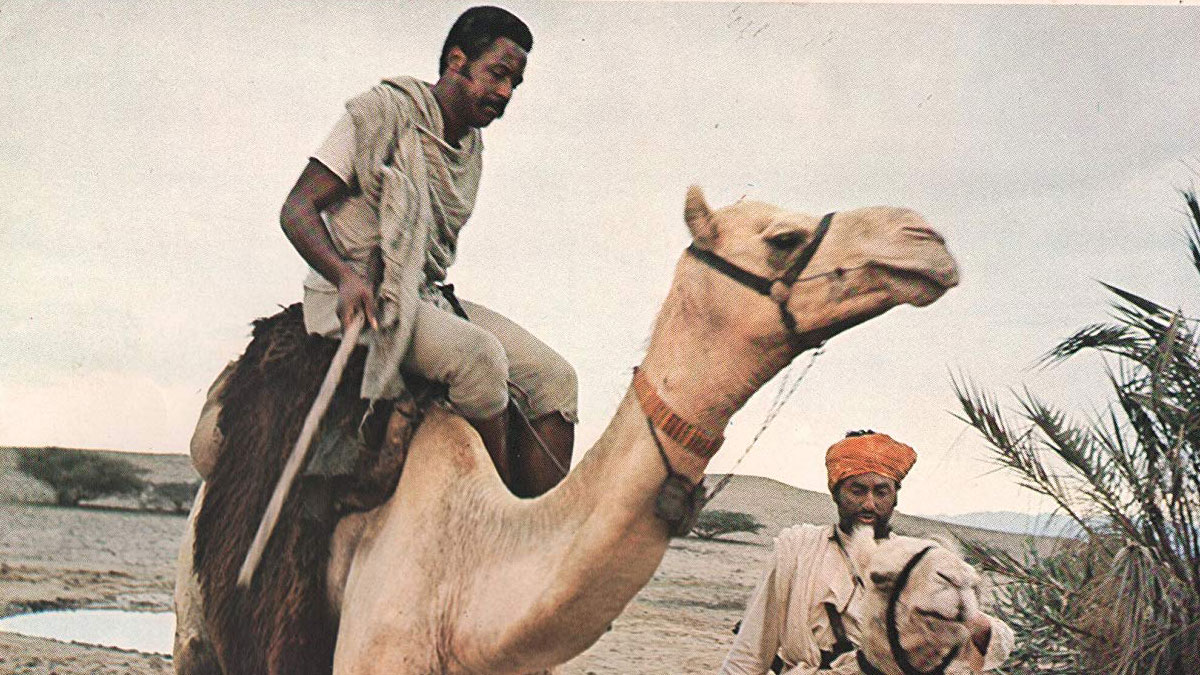 In Paris, a black man is given chase by four white men. They capture him and transfer him handcuffed by car to a house. The wealthy proprietor Mr. Amafi (Frank Finlay) shows ups at the house. He tells Angelo to kill the boy even though he is the Emir’s son. Meanwhile, in New York, John Shaft (Richard Roundtree) chases off some kids trying to steal his hub caps. Getting back to his place he is greeted by some Africans. Refusing to cooperate with them, they overpower him and throw him in the car. Awaking in a horse stable naked, Shaft gathers his senses and then fights bare ass naked against one of his African captors. After being knocked unconscious, he awakens underneath heavy lights. A loud speaker tells him to walk for the next eight hours under the lights and then they can talk. Shaft comes up with a better plan, so he is introduced to Emir Ramila, leader of the Manta tribe of East Africa. His two counterparts are Wassa- his brains- and Osiat – his strong right arm. Ramila offers Shaft twenty five thousand to work with them by becoming a slave. Ramila’s man Gadala explains that two months earlier a truck had traveled from Italy into France. When the truck had begun to catch on fire, the driver had broken up the back doors and the chained up slaves in the back filed out. Ramila wants Shaft to infiltrate the group that is rounding up Africans on the Ivory Coast and turning them into slaves. In order for this to work, Shaft must be rounded up. To assist him is the beautiful daughter of Ramila, Aleme.

The third John Shaft film is a pretty large departure from the previous two entries. Where the previous two films were set in and around Harlem, the third film makes no attempt whatsoever to put John Shaft in his natural setting. For whatever reason they decided that John Shaft needed to be taken out of his element and dropped into a tale involving modern day enslavement. It’s a choice that I think shows Hollywood’s total misunderstanding of what made the Blaxploitation genre work. In films like Cleopatra Jones, Shaft, and Superfly, the main characters are rooted in a lifestyle that is determined by their urban surroundings. These films were about showing black people wielding power over their circumstances. The harsh realities of urban life in the Seventies are shown consistently in these films: pushers, addicts, gamblers, pimps, poverty, racism, and dirty cops. In Shaft in Africa, the producers of the film lose the pulse of the movement in which John Shaft was important. Unlike the previous films which were written by Ernest Tidyman and based upon his original novel, Shaft in Africa is written by Sterling Silliphant, the author of The Towering Inferno. This film screams of being a script that the studios already owned and decided to adapt into a John Shaft film. I mean, does it make any sense for them to seek out detective John Shaft to infiltrate a slavery ring in Africa and Paris? Therefore, Shaft in Africa is best viewed as a campy sequel that nobody needed. As a pure entertainment, it works. The movie feels somewhat like a James Bond film akin to a Live or Let Die due to Shaft going incognito. The reason the film works as an entertainment is due to two things: Richard Roundtree’s cocksure swagger and the over the top lines given to him. The film basically has Shaft allude to his sexual prowess as often as possible. If you find all of this not just a little hilarious, this film will provide some good laughs.

The film opens with the song “Are You Man Enough?” by the Four Tops. This song is a good example of how fast away from the center these films had drifted. The Four Tops as a replacement for Isaac Hayes? The song is actually pretty fun and is much better than the songs in Shaft’s Big Score, but the original theme is once again missed in this film.

One thing the film has going for it: cinematography and scale. This film was given the biggest budget of the three films and it looks like it. Filmed in Panavision in Metrocolor on location in Ethiopia, the film definitely looks great.

For myself, this is a fun and largely unnecessary second sequel. For what it is, it’s entertaining and pretty ludicrous. It is too bad that they went this direction and basically killed their chances of continuing the series. If they had continued to just give John Shaft cases in and around Harlem, who knows how long the series could have gone. Instead they decided to make the character irrelevant. For fans of the first two films who are willing to make an intercontinental leap in believability, the film offers fun light entertainment.

Filmed in Panavision in Metrocolor, Shaft in Africa looks great on Blu-ray.

This is the best looking of the three films. Fine detail is excellent. Colors pop. The film benefits from a larger budget and some beautiful Ethiopian vistas. Presented in 2.40:1 aspect ratio with a new 2K scan, this is the best the film has ever looked. Fans should be incredibly happy with the job that Warner Archive has done here.

Similar to the video treatment, the audio treatment on Shaft in Africa is the best of the three pictures. Warner have provided a great DTS-HD MA 2.0 mono track. Dialogue is clear and crisp. It is the most balanced of the three audio presentations. No hiss or distortion. The score sounds nice. There are no issues here worth reporting.

Shaft in Africa is an entertaining but largely unnecessary sequel. The film shows just how little Hollywood understood what made the first two films so special. The film is a fun and campy curiosity that will only be enjoyed by those who don’t mind the ridiculous nature of the plot. Richard Roundtree is the main reason to watch the film, delivering amazing one-liner after one-liner. The new 2K transfer looks absolutely gorgeous, so upgrading is recommended for fans of the film. Better yet – consider purchasing the three pack which includes all three films for a great price. Props are due to Warner Archive for focusing so intently on a beautiful release for a true cult picture.