As the planet’s population boomed, the world stayed the same size and sooner or later, the room was bound to run out. At that point, the decision was made that Earth was unable to hold mankind’s civilization, so new territories were sought out. A new solar system was found, one with many habitable planets and soon enough, a new home was christened. The central planets were governed by The Alliance, while those in the outer reaches resisted, wanting to maintain their freedoms. This led to a monumental conflict, which saw The Alliance force its control on those planets. Even now however, The Alliance can only do so much, so those on the outer borders can still play by their own rules. When a human weapon, trained by The Alliance, escapes, a full on search is put into motion. The weapon, a young woman named River has stowed aboard a small ship, but will she be turned over or allowed to test out her life in the free world?

After the success of Buffy the Vampire Slayer and Angel, it would seem as though creator Joss Whedon could do no wrong on television. His next project was a sci/fi series called Firefly, a series that was quickly canceled and failed to even run a full season. But the show’s fans were rabid and when the show was issued on DVD, it was a hot seller. Whedon refused to let the story of Firefly just vanish, so rumors of a feature film were heard and now, we have that film, titled Serenity. The film isn’t just for fans of the show either, as Whedon has crafted it so that both fans and newcomers can enjoy the ride. This is smart sci/fi in all respects, well written and well performed, with goals of more than special effects and popcorn thrills. Even so, I didn’t think it was a great movie, but a very good one and much better than most sci/fi you find these days.

It’s been a while since I’ve seen this film, so to experience it in 4K (and yes I do mean experience it), was quite a treat. The visuals here are quite stylistic, with a broad scope of color and light designs. The image might be pitch black with faint shadows in one scene, then bathed in vivid colors the next. I saw this movie in the theater and while this transfer shows grain, so did the theatrical prints I saw. High contrast is part of the visual design and it all plays in to the stylized look and feel of this movie. There weren’t really any complaints that I had with the previous version on Blu-ray, but the 4K ups the ante a bit.

A new DTS X mix has been included and it’s further proof that Universal is supporting that format over Dolby Atmos. That is quite a compliment, as that soundtrack was great in its own right, but the DTS X option is the way to go, if you have the choice to make. The audio is impressive here, with a creative and effective sound design that really puts the surrounds to good use. That doesn’t mean constant, loud presence, but it does mean a dynamic presentation that puts you right in the middle of the movie. When the scenes are dialogue driven, the surrounds cue up background noise and build atmosphere. The small touches can make a lot of difference and that is true in this case, as ambient noise is well-handled.

Like most other Universal 4K catalog releases, this contains no new bonus material (wouldn’t it be nice if they did?). The 4K disc contains the commentary track with the rest of the supplements residing on the previously-released Blu-ray. Let’s dig in.

There’s no denying the cult status of this movie and the show, Firefly, that preceded it. It says something that nearly twenty years after a series has run its course, there’s still a slew of people who simply can’t get enough. It’s also nice that out of Universal’s massive slew of catalog titles, this is one of the ones that got an early call up to 4K. While no new supplements have been added, it’s nice to have this in 4K. 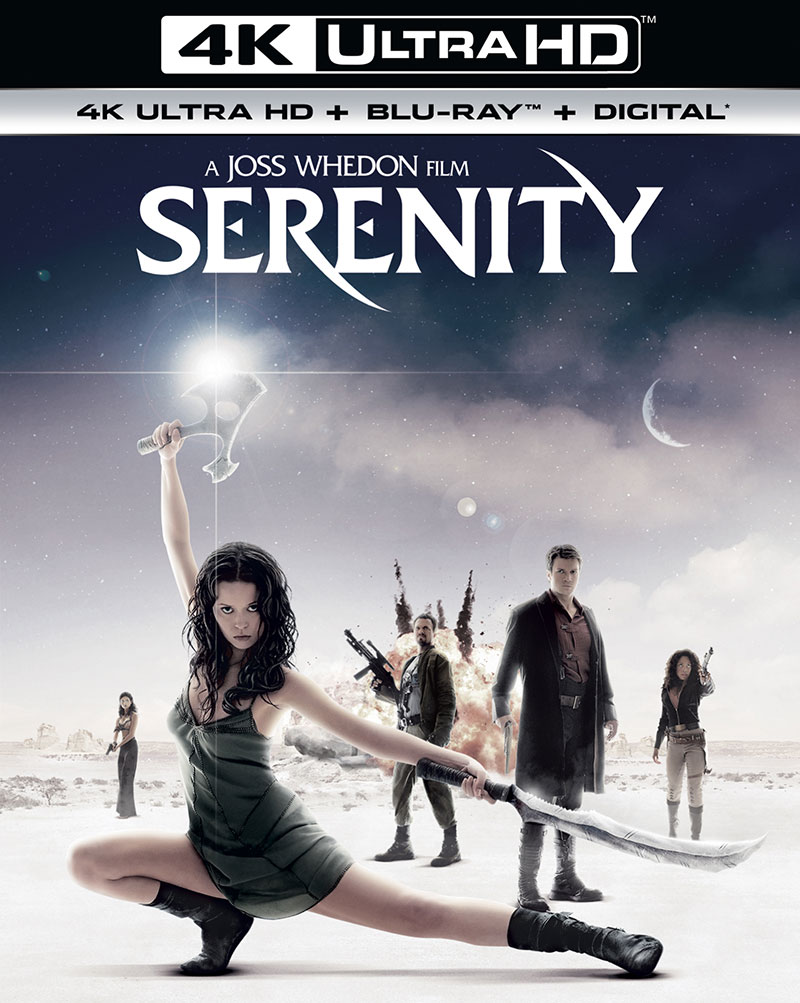