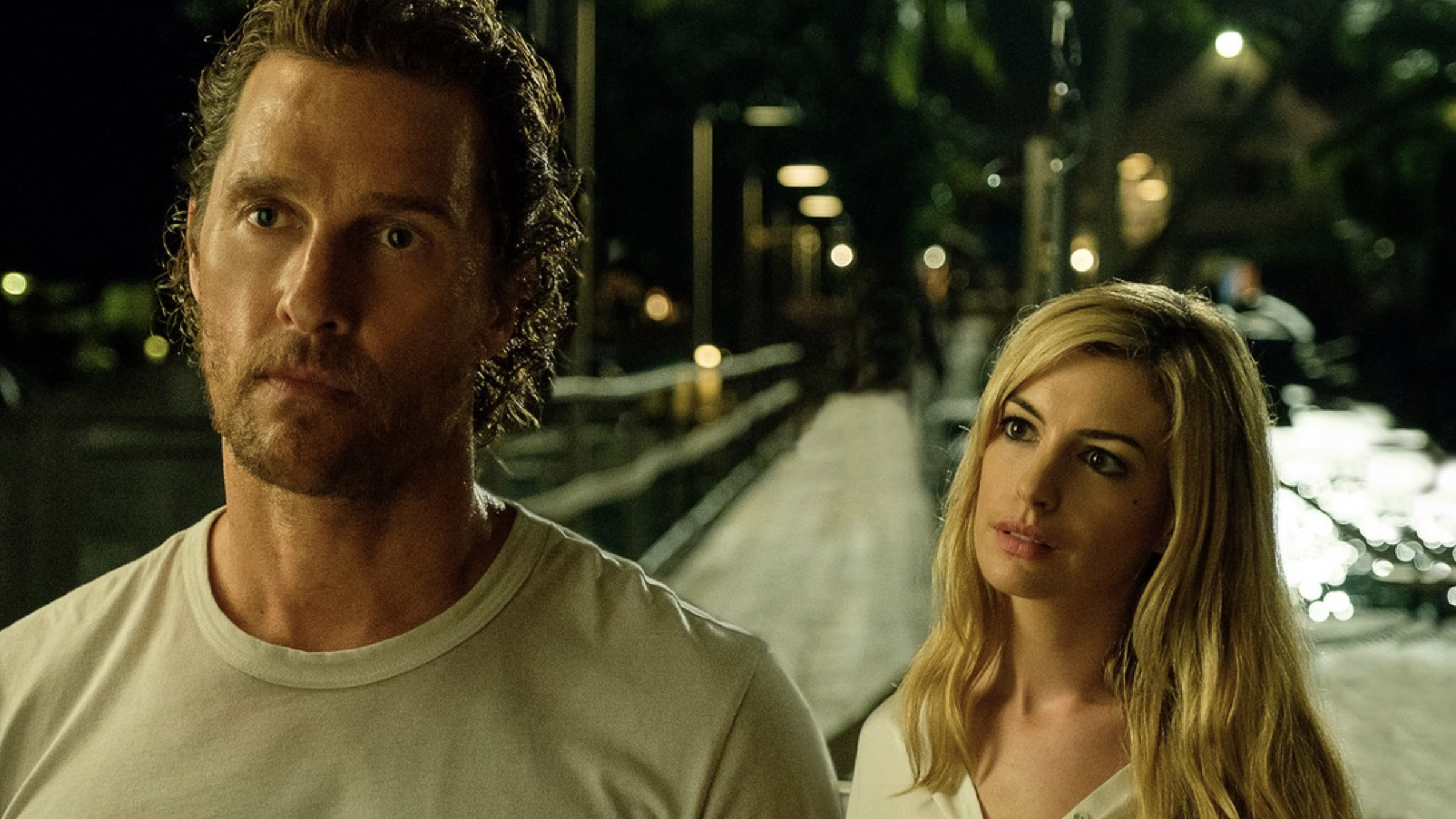 From the moment I saw the trailer for Serenity (no connection to the 2005 film of the same name) I was hooked. It’s the sort of mysterious trailer that seems to tell you everything yet nothing at the same time. We hear the ticking of a clock, see a fishing line slowly being turning and a lot more. It stars Matthew McConaughey and Anne Hathaway. We see that she approaches him with an offer almost too good to refuse. The offer is she wants him to take her new abusive husband out on his boat and push him in the water for the sharks. In return, he’ll be rewarded $10 million. That’s just the tip of the iceberg as there seems to be so much more below the surface. Is his character being played? What’s going on with the mysterious island named Plymouth that his character and others reside on? It appeared to have that film noir feel as well as one similar to the steamy thrillers of the 80’s and 90’s. Indeed, this was something I couldn’t wait to see. It was originally scheduled for a fall 2018 release date before getting delayed to a late January release, a typical dumping ground for films. Regardless, that three month delay was quite a sting for a movie buff like myself. Especially of a film I was already eagerly awaiting. I’ll elaborate more in a bit, but the film held my interest while still letting me down. Don’t expect spoilers from me, but the direction director Steven Knight takes the film is both interesting and disappointing at the same time. It’s the kind of film that’ll keep you hooked then pull the rug from under your feet. It’s also one far too interesting to dismiss. Let’s take a closer look atSerenity.

Matthew McConaughey plays Baker Dill, a fishing boat captain with a history as a war vet and a bad drinking habit. Dill has visions of his past life that often make him question his whole existence. He lives on the remote Plymouth Island where everyone seems to know everyone’s business. Think of it as one of those small towns, but is an island instead. There’s only one bar and the locals seem to know his every move before he does. Even the local radio station seems to be speaking directly to him. Baker has a new lover named Constance, played by Diane Lane. As a way of earning a little extra money on the side, she pays him for sex. Sometimes he has trouble paying his pal Duke (Djimon Hounsou) for coming out on his boat with him. He botches a job that’ll him them both some big money as the film opens, because he’s after a big fish. He even pulls a knife on a man. Just when hope might be lost, opportunity comes knocking in the form of his ex-wife, Karen (Anne Hathaway). She finds him at the bar where she hopes to speak privately. They go back to his boat where she propositions him. She wants Baker (who Karen knows as John) to take her new husband, Frank (Jason Clarke) out on his boat for an excursion where he’ll push Frank over to let him be eaten by the sharks. For this, Baker will receive $10 million. Obviously, this is a lot for Baker to take in, but when he learns that Frank is abusive to their son, the offer seems more appealing. That right there is enough for a movie, but we also get a strange performance from the nerdy salesman, Reid Miller (Jeremy Strong). He keeps missing Baker by only a few seconds until he finally arrives at his house at 2 in the morning. He pleads with Baker to only go fish and not to kill Frank. He then explains the “Rules” of the island and that on Plymouth nobody dies. It’s at this point in the film that a big twist is revealed. Fear not, I won’t spoil it, but it only gives a glimmer of just where the film is headed.

Sometimes our expectations can over hype a film to the point where it can’t help but feel like a disappointment. That isn’t necessarily the case for this film with me. It’s more of the direction that things go. I had several films in mind that I thought the big twist in this film would take. I won’t say which, but none of them came close to just what the film had to offer. While certainly fresh and unpredictable, I can’t help but feel cheated by the whole thing. At the same time the film is just too interesting and out there to be dismissed. I enjoyed the film noir elements and even similarities to such films as Jagged Edge, Fatal Attraction and Body Heat, to name a few, but that’s only a portion of it. There’s a lot more here. I kept having questions, such as our main character did as to just exactly what is going on. Is Baker being played? Is Karen making the whole thing up for other reasons? Why is everyone acting so strange and how do they all seem to know so much about Baker? Rest assured these questions will be answered, but maybe not in the most satisfying way. Serenity is a brave film, one that challenges viewers, but I can’t say that where it takes us is the most interesting or even satisfying. I can safely say that likely no one will be able to predict the big twist in the film, but I do wish it took a different path. It felt that there was a lot of investment to end things the way it did. It’s the kind of film that might disappoint you, but somehow it’s still worth seeing. Sort of. Despite the basic framework of familiar plots from past movies, it turns things on its head that it forms its own identity. It’s also the type of film that might be rewarding with second viewings. That’s if some viewers even want to give it a second chance. I wouldn’t blame them as I myself can’t quite put my finger on just how I feel about the film. It must be applauded as it certainly leaves on impression. The acting is fine across the board, with Clarke hamming it up appropriately and Hathaway playing the femme fatale role nicely. McConaughey as well plays the part perfectly as we’re right there with him through much of the film trying to figure out just what it’s all about.

In short, this is an absolutely gorgeous transfer from Universal. While it isn’t offered in the 4K format, it’s nearly flawless as is. The island in which the story takes place lends itself wonderfully to the HD format. The print is pristine, colors rich and nary a flaw to be noticed. Background shots are well defined as well as clothing and details on all of the actor’s faces. The image is AVC encoded with a 2.39:1 ratio. Viewers should be more than pleased with the results here.

The DTS HD track is also strong, with the opening sequence displaying the strong soundscape. The waves that crash in the background come through naturally and really draw us into this world. The vocals have the clarity I’m used to as well. The film has a lot going on, so the track stays busy throughout. Like the transfer, this track serves the film in a positive manner.

This disc contains no supplemental material. Not even a trailer.

I am at a loss for Serenity, which has a lot to offer. It was easily my most anticipated film in a long while. I certainly won’t say my small disappointment in the film is the result of me over-hyping it so much as just where the film takes us. The big reveal is certainly a unique one, but also not the most interesting or satisfying one. In some ways it feels like the plot is a bit wasted, but on the other hand, the film is just too enticing to dismiss entirely. I say see it, but with caveats. It’s certainly one that warrants much discussion afterwards. Now having viewed it for a second time with a shifted perspective, I could appreciate certain elements more and obviously I knew what to expect. The film leaves me with some questions, but in a good way. By that I mean that it resonates and gets under my skin. I wish the disc included at least a commentary track, but that wasn’t to be. Still, the film earns my recommendation.