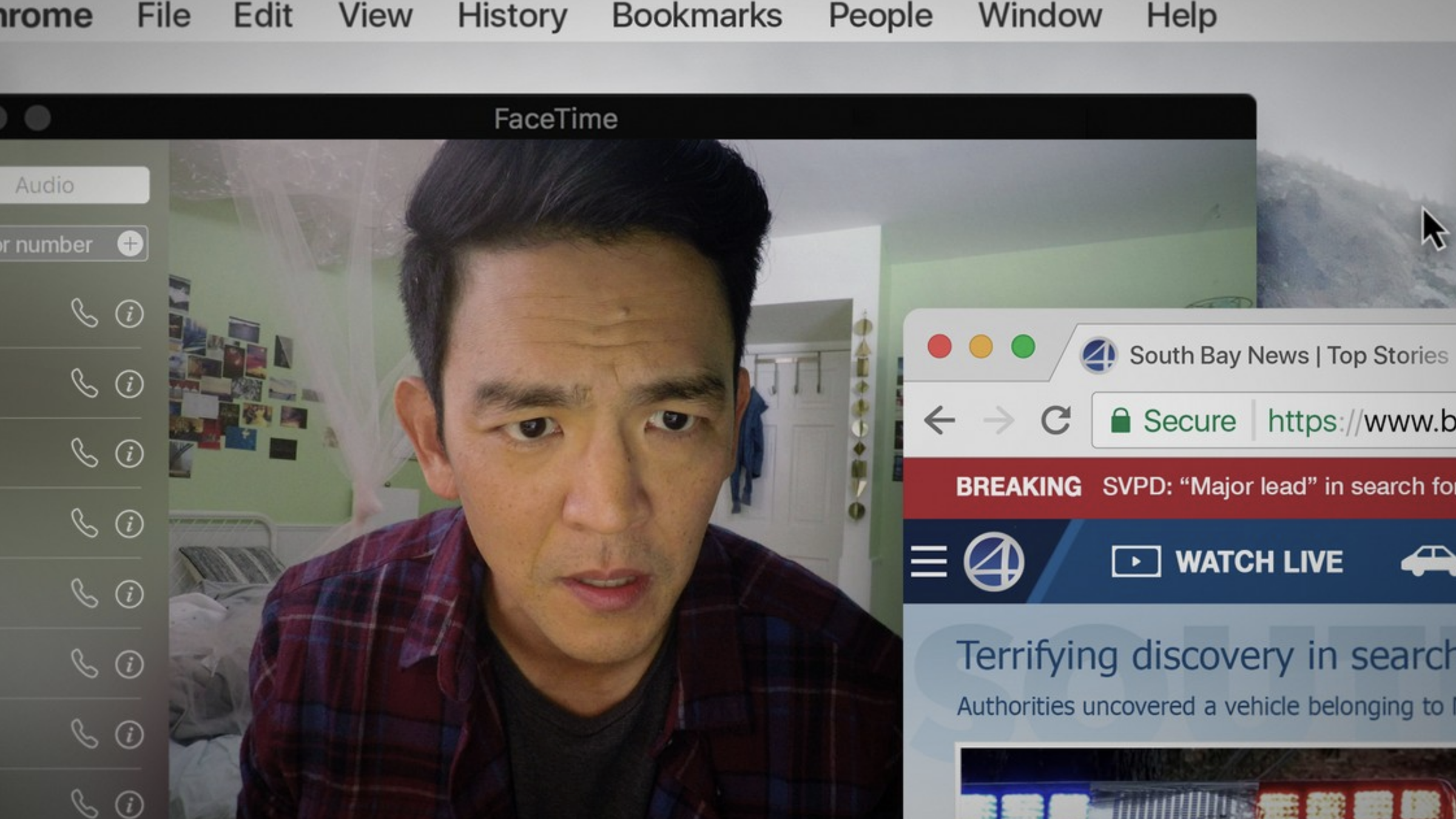 Technology, be it a cell phone, computer or even a video game, is both a curse and a blessing. Oftentimes it’s how we view it and, more importantly, how it’s used. As a purveyor of the internet for the past 25 years I’m pretty accustomed to this and the internet is rarely your friend. Then again if you know how to use it, it can be a powerful ally. However, Hollywood hasn’t managed to adequately convey this as typing is, well, not a particularly cinematic activity, especially when viewed from a second-person perspective. For a filmmaker to communicate the rapid-fire ways in which our minds and fingers work isn’t exactly something that’s easy. Filmmakers are still, in fact, trying to figure out how to convey texting in films and television. In short, we’ve got a ways to go before we can really experience a film in the same way we do technology in our everyday lives. But Searching makes good strides to change that.

We meet David (John Cho) as the film’s prelude takes us through a montage that can best be described like that of the Pixar film Up. We see the courtship and marriage of he and his wife (Sara Sohn). We go through the years in various platforms of computers and operating systems, though the message is quite touching when we see that David has lost his wife to cancer. With the backstory in place, the film focuses David’s daughter, Margot (Michelle Liu). Margot, supposedly at a study group, never comes home. David awakens to multiple missed texts and phone calls. After trying to find her and talking to a few of her friends, he finally pulls the trigger and calls the police. Det. Rosemary Vick (Debra Messing) is assigned to the case and encourages him to provide her with information about Margot’s friends, interests and lifestyle. Using her laptop, he pours through Facebook posts, Gmail and Tumblr feeds trying to piece together what, if anything, can be done to find her. It’s during this he learns things about his daughter that he never knew.

The screenplay was written by Aleesh Chaganty who also directed the film. It’s heartfelt, passionate and a good piece focused solely on the characters. It values the humans in the film as well as the tech behind it. Let’s face it, life on the internet can be exhausting and it takes a thick skin to wade through the litany of message boards, chat rooms and endless comments. Thankfully Searching is more than just the tech and it has great character development along with some humor, wit and charm. If there were any doubts as to Cho’s competence as an actor, let them be erased. Yes, he was Harold in the Harold and Kumar movies, but even then had a presence about him. The film shows how helpless someone can be even with the world at their fingertips and it’s at its height when it’s actually searching.

In what seems to be (or might be) a new trend, the majority of this movie takes place from a POV standpoint. In a way, the audience is looking through the computer screen at Cho’s character overlaid with various web pages, iMessages and a FaceTime list. It’s quite interesting, though I’m sure we’ll eventually get to the point where the novelty has worn off. Think of it as the new “found footage” genre. That said, the images, particularly of the web pages and apps, is crystal clear. The 1.85:1 AVC HD image has wisely been used to fill the entire screen which, I feel, brings the viewer into the movie. I think it’d be a bit annoying with black bars at the top and bottom. It’s a more intimate experience, to be sure. Of note, the entire film isn’t set up in this manner (like Unfriended), there are several shots out in the “real world.” Colors are bold, text and images are crisp and contrast seems spot on. It’s a unique look and feel to a very unique film.

I believe we’re all at the point where we can easily identify a ringtone, message sound or anything else that might be associated with a device we keep in our pocket (or desk) by now. If not, well, I don’t really know how to explain it. Having said that, the DTS HD Master Audio track doesn’t have many points in which it’s challenged. The majority of the film is dialogue-driven, though there are some montages of web pages/news reports that do fill the atmosphere with some overlapping dialogue. Cho’s deep, commanding voice sounds natural. Surrounds are used sparingly, though they do offer up a bit of backlit ambiance in some of the latter scenes.

Searching is a gripping, poignant film about something that no parent should ever have to go through. John Cho’s performance is, by and large, a solo effort and in many cases it’s him acting with himself. I have to imagine it was a difficult role to film and perform. Sony’s Blu-ray looks and sounds good, though it’s a bit light on the supplemental material. Nevertheless, it’s one of the better films I’ve seen in a while.