As the Blu-ray format ages, we’re getting more and more classics on it.  When it comes to Steven Spielberg’s films, it’s been a good year with Jaws, the Indiana Jones Collection and E.T. having all been released recently. For my money, I prefer the horrific Jaws (which made me afraid of nearly any water, even when I swim laps in a pool I feel that some shark might bite me in half), which played on our most basic fears; and the rather light-hearted Raiders of the Lost Ark. Harrison Ford was never more amicable than when wearing his trademark fedora and with a fourth installment on the way, we just hope that they didn’t wait too long to make it. Regardless of your opinions of Spielberg, he has made some interesting and unforgettable movies. Not only that, but like Martin Scorsese, he’s committed to films in general and the preservation of them. I guess when you have so many millions of dollars, you can do what you really want to instead of focusing on paying the bills. He’s purchased old Academy Award statues and returned them to museums (Clark Gable’s for “It Happened One Night” to name one) and was one of the founding members of directors to get films named to the National Film Registry, an organization that takes our most important and honored films and preserves them. Yes, Mr. Spielberg had about done it all, yet he hadn’t earned a Best Director Oscar, something which had eluded him. With Schindler’s List, he not only got that out of the way, but it took home a statue for Best Picture as well. More importantly, this is when Steven Spielberg became Steven Spielberg. This is the movie where he finally grew up.

Schindler’s List tells the horrific, yet true, story of Oskar Schindler (Liam Neeson) as the savior of over 1000 Jews in Nazi Germany. This is the type of movie that feels like a documentary and more like something we “have” to see. Like the recent and controversial “The Passion of the Christ”, we see it because we feel it our duty to see and experience it. If I remember my old high school writing classes (yes, believe it or not I had them), there were three themes when it came to stories. Man vs. himself, man vs. nature and mans inhumanity to man. Given that these are true, Schindler’s List would certainly qualify as the latter. Schindler was not an honorable man, he was a member of the Nazi party and owned a factory that employed Jews as forced labor. It wasn’t until he witnessed the mass destruction of the Jewish people (and what is happening to them and what will happen to them) that his heart begins to change. His main nemesis is the ruthless Amon Goeth (Ralph Fiennes), the person in charge of the camp. Through random acts of violence, he keeps the fear alive and exploits Schindler for his money. Schindler impoverishes himself in the process as he expands his operation to employ more Jews, but he feels that he hasn’t done enough. To complicate matters, he must keep up the charade to Goeth that everything he is doing is good business. Like all the great movies, certain images and words stay with you long after the credits roll.

To say that Schindler’s List is a great movie is a bit of an understatement. It exists on a plane where only few others reside. Spielberg managed to nearly capture this again in Saving Private Ryan, but the story of an entire people is far more of an undertaking than that of one man. The movie ranks as a seminal favorite with audiences and critics alike. It currently “ranks” as the #6 best movie on the Internet Movie Database and even placed in the Top Ten when the American Film Institute ranked their Top 100 movies of all-time (and this was compiled in 1998, just five years after the movie came out). Featuring one of the greatest heroes in American Film (Schindler) and one of the greatest villains (Goeth), there is more to it than meets the eye. The movie is brutal in a way that most other movies aren’t. We’re seeing a work of fiction, but on the other hand we’re seeing history. Nudity abounds, but when done right (tastefully), we don’t think of it as nudity for the sake of being there; it all has a purpose and reason. I’ve probably missed out on numerous insights and details, then again I’ve only seen it a few times. It’s not a movie you can sit down and watch time after time as it stays with you. Like so many other great movies, it will change the way you have viewed history and might make you question what kind of world we’ve lived in. Very few movies can do that.

This isn’t the sort of movie that I watch very often.  In fact, I think the last time I saw it was when it was first released on DVD a decade ago when it was celebrating its ten year anniversary.  Suffice it to say that this is the jewel in Spielberg’s crown (and that’s saying a lot) so to have this look anything less than perfect would be a travesty.  Thankfully Universal has done a bang up job with this title (as expected) and I know this phrase is thrown around a lot, but…it’s never looked better.  For those that haven’t seen this film it’s almost entirely black and white.  I say “almost” because there are bits of color here and there, but I’d still consider it a black and white film.  The 1.85:1 AVC HD image is nothing short of phenomenal with contrast and black levels being very strong and adding a bit of depth to some scenes that looked a bit flat on the DVD.  Image detail has been improved a bit but not to the point where it’s over-sharpened.  The movie contains some very graphic and iconic imagery, though from a physical standpoint, the film looks stunning.

The DTS HD Master Audio soundtrack wasn’t really designed with the same “oomph” that Spielberg’s Saving Private Ryan or Jurassic Park was, rather this is a more subtle and understated mix that certainly gets the point across.  By and large, this mix is solely concentrated on the front stage with surrounds chiming in only during a few key moments.  John Williams’ score sounds masterful and does make use of the additional channels, but it’s not so distracting that what’s happening on screen gets lost.  Dialogue sounds sharp and clear and though I noticed a bit of an upgrade in overall sound quality, it does tend to pale in comparison to how stunning the picture is.

Unfortunately we don’t get any new supplements for this 20th Anniversary Edition, all the extras are presented in standard definition.  The most robust of them is “Voices from the List” which is a 80 minute documentary with chronicles of the survivors of the holocaust as well as their descendants.  Spielberg acts as a ‘host’ of sorts, though like the film itself – this isn’t easy to watch. “USC Shoah Foundation Story” is a very brief overview of what this is and has a brief segment with Spielberg. Finally we get a brief overview of “About IWitness” which is also way too short. There’s also an UltraViolet copy of the film, a DVD of the film and the disc features some “interactive bookmarks.” 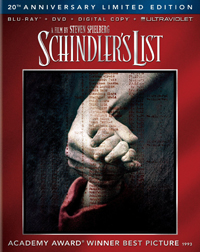