Ryan is very gung-ho, and while saddened at the news of his brother’s fates, wants to stay and help defend the last bridge in France (it was a very important strategic location). This leads to a showdown between the Germans and the troops trying to defend their bridge. Hopelessly outnumbered and with all odds against them, the movie ends in what is sure to be one of the best war movies made.

A few other notes about Saving Private Ryan. The whole cast was sent to England to undergo basic training, all except Matt Damon (this was to get the actors to naturally “dislike” him), and all wanted to quit and go home after three days of this. All except Tom Hanks, who came out and gave the guys a pep talk, after which no one said a word and they finished their training without a hitch. Bottom line, Saving Private Ryan is a movie that you really should see. Not only is it well-made, has great acting and is superbly directed…but the subject matter ultimately has a very positive message and reminds us of how much we take our freedom for granted.

The film has seen a few different incarnations on home video formats over the years, namely DVD and Blu-ray. This 4K/Ultra HD is the first foray into the next generation territory for the film. Spielberg utilized a new concept in the way he shot the film and the film itself had a very bleak, washed out look to it. Paramount’s 1.85:1 HEVC 4K transfer retains that look and feel of the film that gave it a very lifelike look to it and suffice it to say that it’s nothing short of superb. I always found the Blu-ray to be a little too washed out, and that’s something that’s been corrected for this 4K release. There seems to be a little more naturalistic sense of color, flesh tones seem a bit warmer, giving the film a more realistic look. Fine detail is tack sharp as well, the little fragments of shrapnel from the exploding buildings, the dirt and grime on the uniforms and skin – simply amazing. Saving Private Ryan has never looked “bad” on any home video format, but this is, far and away, the best and most realistic it’s ever been.

For nearly twenty years and thousands upon thousands of reviews, I’ve often said “…this is no Saving Private Ryan…” or “…it can’t hold a candle up to Saving Private Ryan…” (I think two examples is enough). Well, this is Saving Private Ryan and it’s one of those titles that helps you justify what you’ve spent on your home theater system – perhaps to your wife or, more importantly, to yourself. Suffice it to say that Paramount has pulled out all the stops with this new Dolby Atmos presentation and let me tell you that it’s worth the price of admission alone.

I don’t care how many channels you’ve got in your setup, if you’re so equipped with a Dolby Atmos receiver and speakers, this is one track that will simply blow you away. And it did. It knocked a clock off the wall. Every facet of sound is covered here from the little bullets whizzing by (even underwater), to planes zooming above to a tank blowing up a building. The object-oriented mix simply leaves no stone unturned. Dialogue is very strong and clean, surrounds are almost constantly in use and suffice it to say that the LFE do get their time as well. This is probably the best example of surround sound that I’ve heard on disc and if our scale went to a 10, this would have that score.

This three disc set is essentially the Sapphire Series Blu-ray with the 4K disc in the package. Both the 4K and Blu-ray discs have their own feature film presentation with all of the supplements being on the included third Blu-ray disc. There’s nothing new here, but what we have aren’t exactly paltry.

Looking back on the Oscar race of 1998 and watching this movie again, it only strengthens how amazingly good this movie is. Don’t get me wrong, I loved Shakespeare in Love, but time has told us that this is, by far, the superior film. Then again, the Academy doesn’t always get it right (obviously). Paramount’s 4K presentation of Saving Private Ryan is simply second to none. The improved audio and video make this a reference-quality disc on every technical level out there. The lack of any new material is a tad bit disappointing, but what we have in regard to supplements isn’t that bad. This is an easy recommendation for anyone with a home theater which, I expect, is anyone reading this. 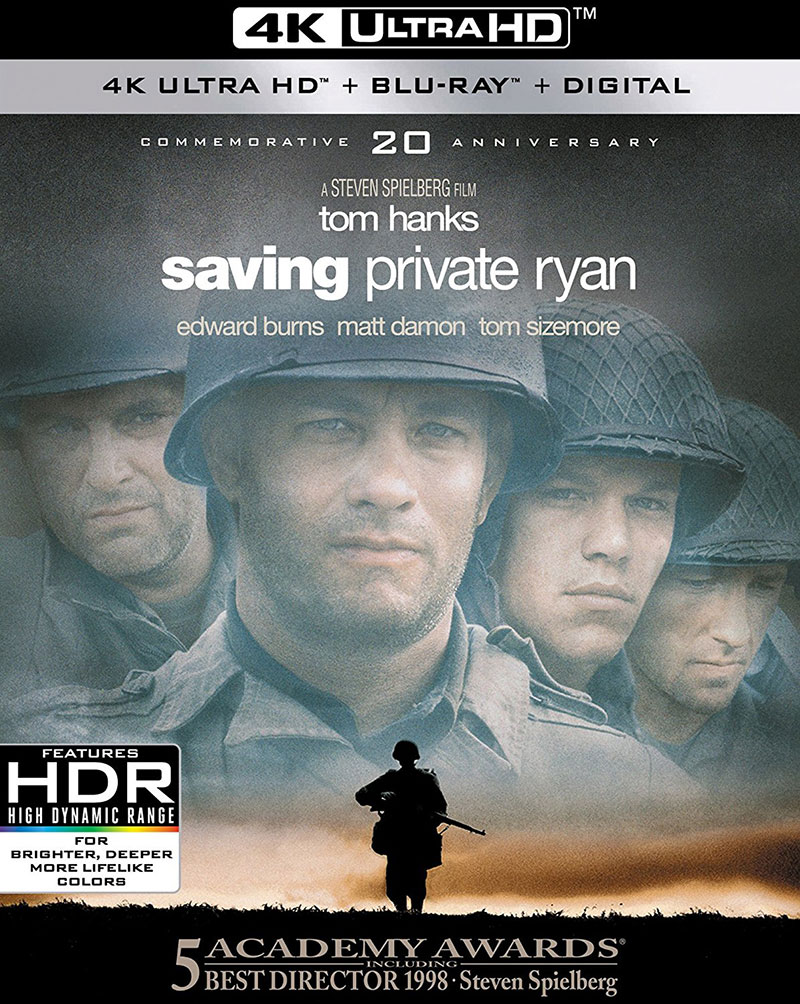