Ryan is very gung-ho, and while saddened at the news of his brother’s fates, wants to stay and help defend the last bridge in France (it was a very important strategically). This leads to a showdown between the Germans and the troops trying to defend their bridge. Hopelessly outnumbered and with all odds against them, the movie ends in what is sure to be one of the best war movies made.

A few other notes about “Saving Private Ryan”. The whole cast was sent to England to undergo basic training, all except Matt Damon (this was to get the actors to naturally “dislike” him), and all wanted to quit and go home after three days of this. All except Tom Hanks, who came out and gave the guys a pep talk, after which no one said a word and they finished their training without a hitch. Bottom line, Saving Private Ryan is a movie that you really should see. Not only is it well-made, has great acting and is superbly directed…but the subject matter ultimately has a very positive message and reminds us of how much we take our freedom for granted.

When the standard DVD of “Saving Private Ryan” came out back in 1999, it literally set the bar very high for the format. Spielberg utilized a new concept in the way he shot the film and the film itself had a very bleak, washed out look to it. Paramount’s 1.85:1 AVC HD transfer retains that look and feel of the film that gave it a very lifelike look to it and suffice it to say that it’s nothing short of superb. Detail has been improved over the standard DVD and you can tell when you see the fine sand particles, the cuts and grooves in the actors’ skin. Amazing. There’s no shortage of demo material out there in regards to how good something will look on Blu-ray, but add this title to your collection and it will quickly become one of the reference discs you turn to.

As if the video wasn’t amazing enough, the DTS HD Master Audio soundtrack quite simply rocks. Even on the old standard DVD the DTS mix was so immersive that you felt like you were on the beach with Miller and his team. This has been bumped up a notch as this uncompressed mix really has the room (literally) to cut loose and show you what its made of. Dialogue is very strong and clean, surrounds are almost constantly in use and suffice it to say that the LFE do get their time as well. What really struck me were the discrete sounds like the whizzing of a bullet going from front to back surrounds, the clanging of the flag on a flag pole, the gunshots heard in the distance. This is probably the best example of surround sound that I’ve heard on disc and if our scale went to a 10, this would have that score. Reference-quality.

Paramount has offered up “Saving Private Ryan” as a two-disc “Sapphire Series” edition with the supplements residing on the second disc. We start out with a documentary narrated by Tom Hanks as we see some archival footage and we get a taste of the war in the Pacific as well as the European side of things. Running at nearly 90 minutes, this is a very expansive documentary. By clicking “Saving Private Ryan” from the menu, we get a more robust set of supplements, though most are short featurettes. We get an introduction, “Looking into the Past” which showcases Spielberg and his research he put into the film. “Miller and his Platoon” shows Hanks and Spielberg talking and the research they put into finding the supporting cast. Rounding out these are “Boot Camp” which is pretty self-explanatory and “Making ‘Saving Private Ryan'” which tells of the film itself, how Spielberg approached it and his collaboration with cinematographer Janusz Kaminski.

“Re-Creating Omaha Beach” tab, we get an overview of the invasion itself as we see the scene take place and the ultra-realistic vision Spielberg had when doing this opening sequence. Moving on we have “Music and Sound” which interviews composer John Williams and his part in the movie. “Into the Breach: Saving Private Ryan” that has interviews with some actual vets of WWII and Stephen Ambrose (a historian) telling of the events of the Normandy invasion. We end with the appropiately-titled “Parting Thoughts” as Hanks and Spielberg give us their .02 on the film. Lastly the original theatrical trailer has been included. 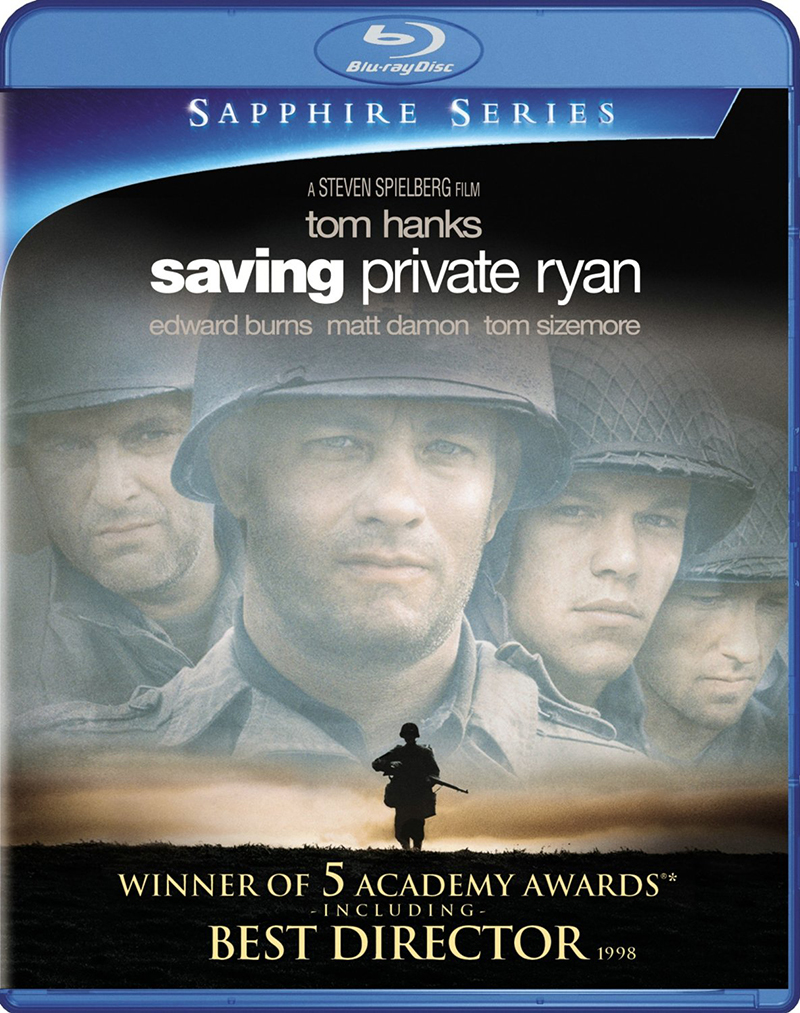