In his district of control, the governor of Tango is beloved, known as a man of honor, respect, and fairness. In a world where power often goes hand in hand with corruption, he is a rare example of what a good man can do in office. He puts his people before himself, even if it means he faces dire consequences. When word comes down that he must send more men into battle, he refuses, as the farms are already understaffed. If he sends more men, it would have a terrible impact on his people and their land. While his decision is honorable, it is met with harsh punishment and he is forced into exile. Years later when his wife Tamaki (Kinoyu Tanaka) seeks to take her family and reunite the family, she has to travel a dangerous path. What seems to be kindness from a stranger turns out to be anything but, as the family is sold into slavery. A decade soon passes and the governor’s son has forgotten the honor of his father, as he has become abusive and sadistic. Is there any hope left for this family to be one once again, or is there only darkness ahead for them all?

This movie is considered a masterpiece in some circles, but don’t be surprised if you’ve never heard of Sansho the Bailiff. The film wasn’t released in the United States until over a decade after its production and with no television broadcasts and a low profile home video release, it has remained quite hidden. But now Criterion has blown the lid off Sansho the Bailiff, doing the movie justice in this superb edition. Criterion has even included an eighty page booklet, which has two versions of the story that inspired the movie, which adds a lot to the presentation. As you’d expect from a beloved folktale foundation, the narrative here is strong and when combined with the well crafted visuals, the result is a film that really resonates. The emotions run high, but not because of melodrama, instead the characters are so well developed, we can’t help but invest in them. I am a cynical person, but even I was hoping against hope for the resolution to be a positive one. Sansho the Bailiff is just a fantastic movie and one that holds up to multiple viewings, so I give Criterion’s release a very high recommendation.

Criterion released this title on standard DVD a few years ago to high praise and, thankfully, that is still the case for this HD release.  Presented in a full-frame 1.33:1 AVC HD image, the black and white is simply…majestic.  I mean really, there’s no other word for it.  It looks that good!  The film is nearly sixty years old and I’m hard-pressed to find anything wrong with the way this looks on Blu-ray.  Contrast and black levels are a bit more important in a black and white film as opposed to color and they’re rock solid here.  Detail has been improved a bit from the DVD and though some scenes do contain the slightest bit of grain, they’re few and far between.  Criterion often raises the bar with their releases, but this is simply one of the best offerings that I’ve ever seen.  Amazing.

While not on the level of the video, the LPCM 1.0 Japanese track does sound fairly decent.  English subtitles are included here if your Japanese isn’t up to par (mine isn’t).  There is a bit of a slight hiss in some of the background scenes, but by and large the dialogue really carries the film very well.  Granted, it’s a mono track and, as such, things are a bit on the limited side, but for a movie of this age to sound this good is yet another testament to how good this is (on a technical level).  Well done.

If it ain’t broke…these supplements are the same as the ones that appeared on the 2007 Criterion standard DVD.  Having said that, we start off with an audio commentary kicks off the extras, as Japanese literature professor Jeffrey Angles sits down to talk about the movie. I wasn’t too taken with his session, but he does have some good information to share. He is a literature professor, so he talks about the story a lot, especially in how it was changed from the original source. He spends a good amount of time either silent or narrating however, which detracts from the track’s value. You can also check out some new interviews, including a ten minute piece with actress Kyoko Kagawa. 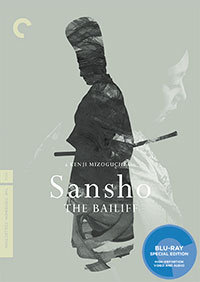