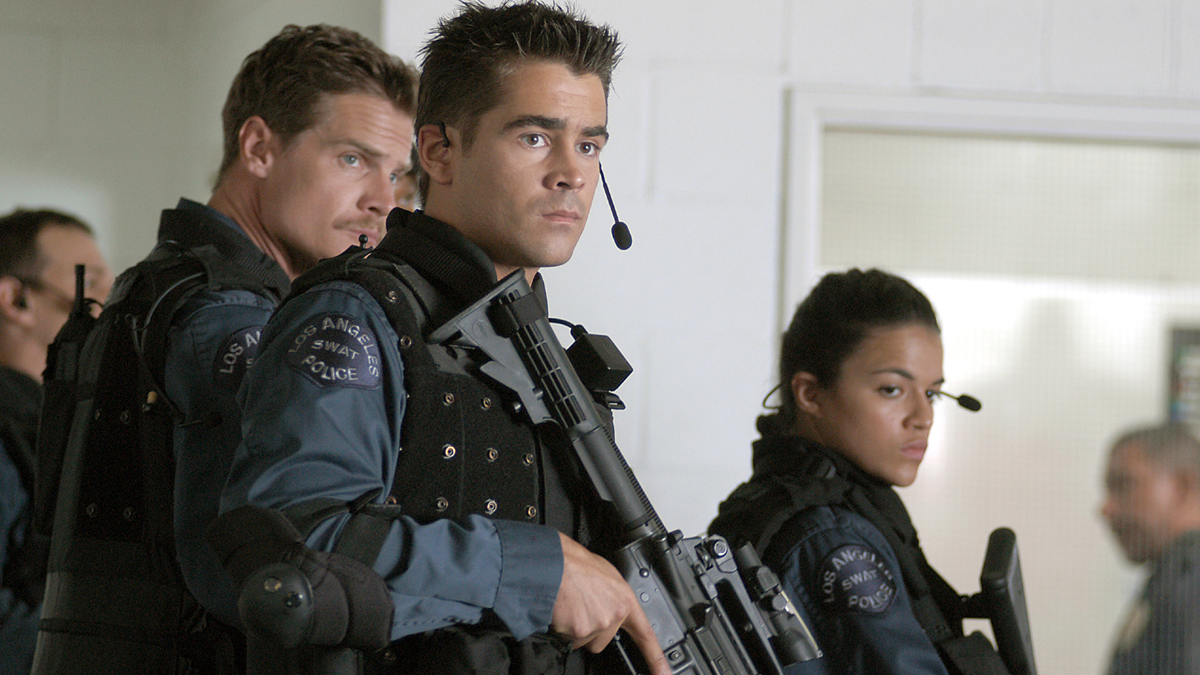 It’s been some time since I last saw S.W.A.T before I got this disc for review. I remember liking it just fine when I saw it in 2003, though it seemed only slightly above average. This due largely to the top notch cast. You’d have to be hiding under a pretty large rock to not have seen at least one ad for one of the many films starring Colin Farrell. The actor was on a hot streak during the early 2000’s. He’s still in a good number of films, though his popularity isn’t what it once was. And that’s fine. Samuel L. Jackson also stars in this, though that should surprise no one. It’s funny looking back at this film now and having many thoughts. For one, the soundtrack is full of plenty of harder rock songs that acted as a staple of the early 2000’s. I also wonder about the central plot involving a prisoner offering $100 million to anyone who helps free him would be handled in the social media/smart phone world we’re now living in. 2003 was hardly the stone ages, but a lot has changed in the years since. I’ll admit that I never got into the TV show on which the film was based, but taken on its own terms, S.W.A.T. offers an entertaining enough diversion for a couple of hours. Let’s check out the plot, shall we?

As the film begins, we find hot shot cop, Jim Street (Collin Farrell) and the SWAT team on a mission. A gang of robbers have taken over a bank, and Brian Gamble (Jeremy Renner) disobeys and order which does stop the robbers, but wounds the victim. Gamble and Street are not only partners, but also close friends. The victim who was wounded decides to sue the department for her injuries. Captain Fuller (Larry Polindexter) decides to demote the two of them, but a heated argument ultimately leaves Gamble without a job. The captain offers Street a second chance, but he’s still sent to work in the gun cage. Meanwhile, Hondo (Samuel L. Jackson) shows up per the Chief of police’s request to help re-organize and reshape the SWAT team. Hondo is something of a hero around the station, and it doesn’t take long for him to set his sights on Street. He wants Street on his team. A few of the other new recruits are Deacon Kaye (LL Cool J), Christina Sanchez (Michelle Rodriguez) and TJ McCabe (Josh Charles). We get a good bit of training scenes before the team is give the green light. A parallel story finds French drug lord Alexander Montel (Olivier Martinez) arriving in town to have a meeting with his uncle. He kills his uncle after it’s discovered that he has been stealing money from the family. Montel is on his way back to the airport as he’s pulled over (he’s driving his uncle’s car which has a broken taillight). He must be detained as they must get proper I.D. on him. Turns out that he’s an international fugitive. One day he tells a news reporter that he will give $100 million to whoever gets him out of prison. Now it’s on Hondo and his team to transfer Montel to prison.

S.W.A.T. gets by a lot on the cast, but even they can’t quite overcome the generic feeling. The film tries to give some development to the characters, but a lot of it goes nowhere. Street and Sanchez have a few nice scenes together, but there’s very little payoff to their relationship. The film does have a bit of fun with civilians trying to get to Montel to seek their payment, but that angle isn’t given lots of attention. I mentioned earlier how if this took place today how things might’ve played out. There’s also the limiting PG-13 rating which is felt during a lot of scenes. This type of film calls for the R rating where the action can let lose, but that wasn’t to be. Still, the film has enough going for it to warrant a look. It just might not be something that stays with you after the closing credits.

I can’t comment on the previous Blu-Ray disc offered by Sony, but I feel mostly pleased with this one. It doesn’t dazzle the way a lot of more recent titles do, but it’s more than adequate. Colors appeared smooth and natural, the print displayed no obvious flaws, and background shots were nicely detailed. Flesh tones appeared even and smooth as well. The image is AVC encoded with a 2.39:1 ratio.

The DTS HD track fared pretty well too. Vocals and all were fine, but it’s the action scenes that’ll give you the most bang for your buck. The track stayed reasonably active throughout, thus keeping all channels busy. The rears kicked in when needed and all things considered, added to the general atmosphere the film sets up.

S.W.A.T. is a serviceable action flick that gives the audience exactly what they should expect. It could use some trimming in the middle, and the PG-13 rating limits it a bit, but it still mostly entertains. It’s not something I feel the need to revisit many times, however. As far as this release goes, if you own the previous disc, I can’t see why you’d get this. This has 2 commentary tracks, but drops the deleted scenes from the previous release. Strangely, the old DVD still had more features than either of these. If you don’t own it, just decide if you want to listen to the commentary tracks or not and go from there.