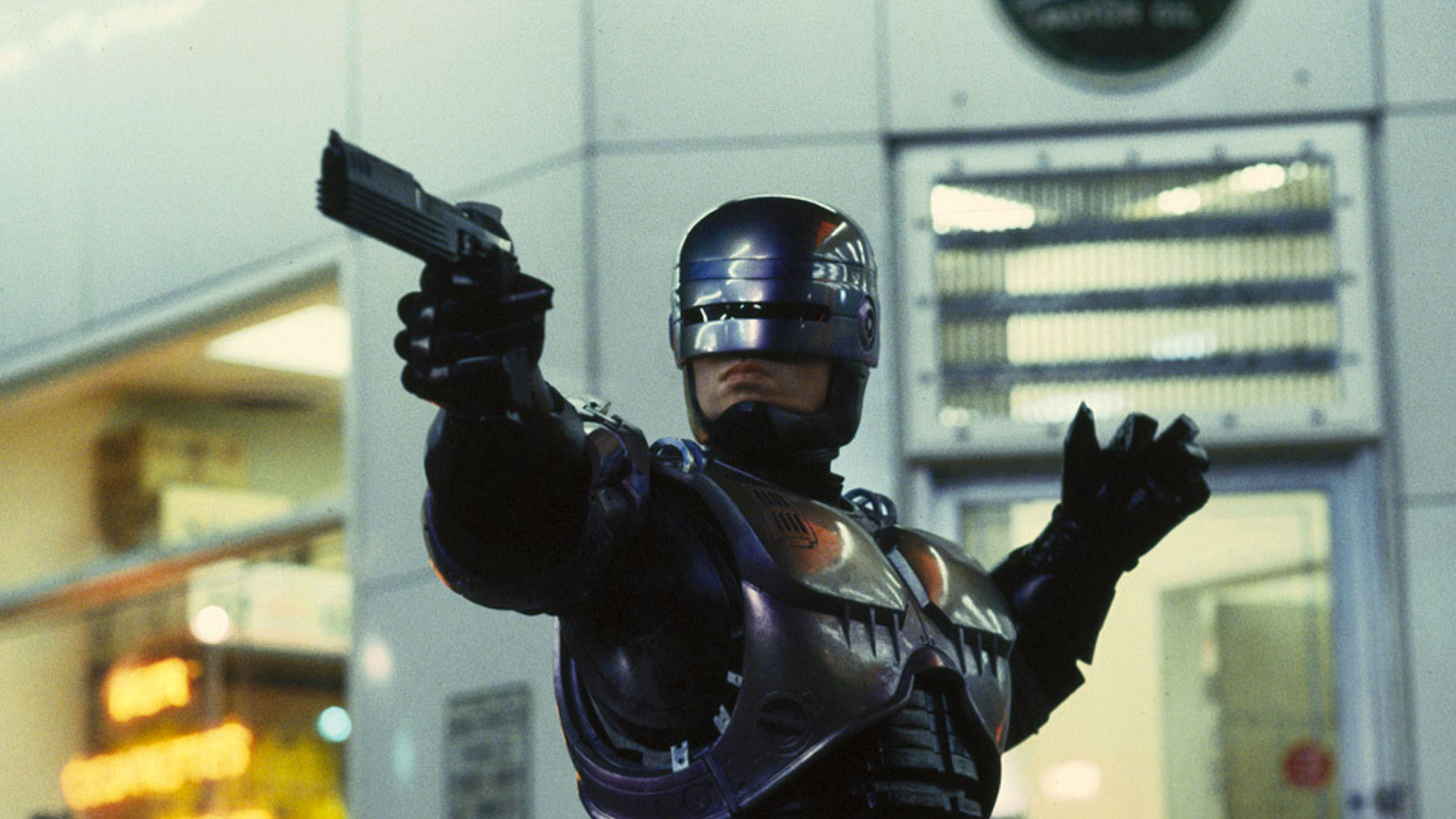 Robocop takes place in near future Detroit. The city has been facing a lot of violent crime and police have been murdered routinely. The city allows the conglomerate Omni Consumer Products to take over their police force with the caveat being that OCP can rebuild in some of the worst parts of the city. Vice President Dick Jones (Ronny Cox) offers a solution for the crime in the city – a robotic policeman named ED-209. When ED-209 backfires horribly, Bob Morton (Miguel Ferrer) sees a chance to introduce his cyborg policeman prototype. At the police station, new recruit Murphy (Peter Weller) shows up for duty after being transferred. He is assigned to a squad car with Lewis (Nancy Allen.) When they try to take down the villainous cop killer Clarence (Kurtwood Smith) and his gang, Murphy is shot to pieces. Seizing the opportunity to try out his Robocop prototype, Bob Morton has Murohy’s memories erased and rolls out the program. As Robocop begins patrolling the streets, his humanity and memories begin to interfere with his computed abilities. He soon finds himself trying to punish the men who had murdered him.

Robocop has aged incredibly well. Out of the numerous action outings from the Eighties, Robocop was much more unique than the rest of the pack. The film holds its tongue firmly in cheek while totally succeeding as both an action film and science fiction film. The film’s ability to blend satire and other elements together was always a tight rope to walk. The script by Edward Neumeier and Michael Miner is exceptional and unique. It has a subversive bend to it that was unmatched at the time. The script’s send ups of yuppies and corporations may be set in the future, but it is a compelling commentary on the go-go Eighties and the media landscape at the time. The off-center elements of the film have helped the film to remain fresh over thirty years later.

The film established Paul Verhoeven as a director to watch and he ruled the box office with films like Total Recall and Basic Instinct until a flop called Showgirls nearly derailed his career. The next time that Verhoeven would reach a similar balance between satire, sci-fi, and action would be his wonderful cult classic Starship Troopers. I still consider this his best film.

Robocop was filmed in Dallas filling in as a futuristic Detroit. The location scouting for the film was brilliant. Dallas was such a boom town in the Eighties that it was easy to make it a perfect vision of the dystopian future with all of its skyscrapers and urban sprawl. The film visually remains compelling. Verhoeven’s reliable cinematographer Jost Vacano fills the screen with great imagery and the beautiful matte paintings still look great. The visual effects hold up beautifully thanks to their reliance on practical effects and analog effects. The film’s epic boardroom scene is still one of the greatest gags of all time and a great reminder of how much better the practical effects worked for delivering visceral visuals. Digital blood just can’t beat squibs and blood packs. The dynamic soundtrack by Basil Poledouris is great. It reminds me of military parade music and fits the film like a glove. I can’t imagine the film without the music.

Casting in the film is exceptional. Peter Weller is perfectly cast as Murphy. His presence looms large over the film. His calm demeanor and great voice add so much to the film. Miguel Ferrer is great as the opportunistic Morton. Kurtwood Smith is very fun to watch as the murderous Clarence. Ronny Cox is dynamite as the old school executive Dick Jones. Nancy Allen does well in the role of Lewis. This is definitely one of the least glamorous roles thanks to one of the worst haircuts of all time.

Overall – Robocop is one of the best films of the Eighties. It is a truly unique hybrid that is still relevant and exciting. The film inspired a comic book series, two sequels, numerous video games, and two television series. The movie was so unique that Criterion Collection even released it on DVD as spine number 23. Fans have always wanted an official collector’s edition and now they finally have it. It was a lot of fun revisiting this film again. Is there anything better than watching the mutant get smashed to bits by Murphy’s cruiser?

Robocop bursts onto Blu-Ray with a brand-new transfer from a 4K scan that looks pretty great. This is the information contained in the liner notes:

RoboCop was restored by MGM in 2013 and is presented in its original aspect ratio of 1.85:1 with 5.1, 4.0 and stereo 2.0 audio. The original camera negative was scanned in 4K and all grading and restoration was completed in 4K. The grade and final restoration were approved by director Paul Verhoeven, as well as executive producer Jon Davison and co-writer/co-producer Edward Neumeier. All audio tracks were remastered from the original mag sound elements.

As the original camera negative only corresponds to the original R-rated theatrical version of the film, at the time of MGM’s restoration, additional print elements were sourced to make up the additional or alternate shots in the Unrated Director’s Cut version. Since these inserts were scanned from lower generation positive elements due to the negatives for these sequences being lost, there is an unavoidable subtle shift in picture quality throughout these scenes. We sincerely hope these shifts do not affect your enjoyment of the overall film.

The original 4.0 and stereo theatrical mixes were remastered for this Blu-ray from the original audio stems at Deluxe Audio, in addition to the “Final Theatrical Mix” isolated score audio option.

Lastly, additional film elements of the TV Cut version supplied by MGM were scanned at EFILM and graded in 2K at R3Store Studios and are included on the RoboCop: Edited for Television featurette on this release. The full TV Cut presented on Disc 2 was transferred from an original DigiBeta broadcast master tape.”

For my money, this is easily the best this film has looked. Fine detail is fantastic. There is a fine level of grain, but it never looks grainy. The film excels on the Blu-ray format. Fans like myself will be very pleased.

Similar to the video, the audio presentation on Robocop is very well done. Arrow have provided three options for audio mixes. The DTS-HD MA 5.1 track sounded great on my surround sound system, but there are also options for a 4.0 or stereo track.  For my dollar – I would go with the surround track which carries enough punch and highlights the great score.

I have owned Robocop in every incarnation since VHS (with the exception of Laserdisc.) The new Arrow release is a gift for lovers of the film. For my money, Robocop is one of the best films of the Eighties. It is a truly unique hybrid that is still relevant and exciting. Arrow Video has given fans a collector’s edition that should be put to the top of any holiday wish list. This edition has three cuts of the film, tons of new interviews and commentaries, and a lot of archival featurettes. The visual presentation is top notch and the film sounds great. The steelbook presentation of the film is beautiful and comes with a nice booklet. Just buy it.