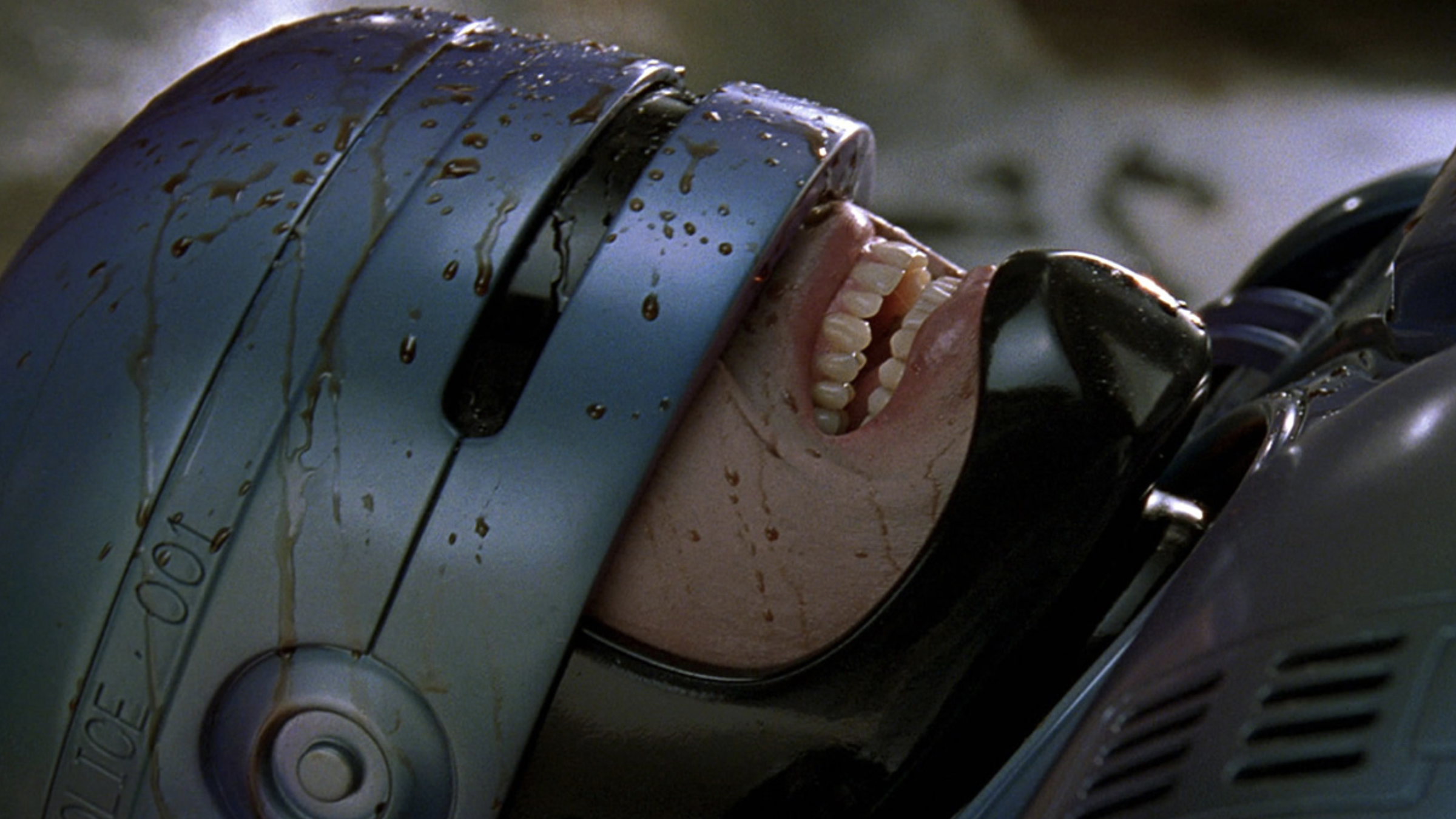 It is a daunting challenge to create a great sequel to a good movie. There are very few sequels that are up to the challenge. When you create a sequel to a unique film that is essentially universally loved, the challenge is even greater. Robocop 2  is not considered to be as good as the first film. Critically panned, the film was a modest box office success. I had never seen the second film despite great affection for the first film. This weekend I finally took the plunge and checked out the Scream Factory Collector’s Edition of the film for myself.

The film picks up after the events of the first film. Detroit is riddled with crime and a new drug called Nuke has turned the citizens into criminals quickly. The main drug dealer in the city, Cain (Tom Noonan,) has a cult-like following. While the city is thorn apart from a drug epidemic it has also begun to go bankrupt in paying back the Omni Corporation. Under the terms of their agreement, Omni Corporation could soon own Detroit, much to the chagrin of Mayor Kuzak (Willard E. Pugh.) This would please the old man (Dan O’Herlihy) very much. The police have gone on stroke with the exception of very few cops and Alex Murphy a.k.a. Robocop (Peter Weller.) When Robocop is shot by a ruthless killer -drug dealer child named Hob (Gabriel Damon) and then is disassembled by Cain, his future looks bleak. In the meantime, Omni Corporation is working on their own new weapon – Robocop 2.

The first thing that I should mention is that Robocop 2 is not as good as Robocop. The first film is an absolute classic and this film is not in the same league. Now that we have got that out of the way, let’s try to judge the film on its own merits. The great Peter Weller is back and so is Nancy Allen. Unfortunately, Paul Verhoeven had departed to direct Total Recall (which I love.) The film landed in the hands of seasoned director Irvin Kershner (The Empire Strikes Back) but he was given very little time to take over the project before it began filming. The documentary said something like four weeks to get prepped, which is nuts. It is a miracle that the film turned out as well as it did considering that it was made during a writer’s strike and given that the original writers had abandoned the project. Helming the writing duties was acclaimed comic book writer and artist Frank Miller. His screenplay was aided by writer Walon Green (known for The Wild Bunch.) The film reminds me of the old saying: What is a camel? A horse designed by a committee. There were so many people that had a hand in the script that eventually the film had to struggle with competing tones. The film is uneven. It is at times very dark and grisly, at times very comic, and at times very cartoonish. This affects the viewing experience and is probably the main reason for all of the backlash. Keep in mind, Frank Miller is one of my heroes, but I feel like he was forced to please too many masters here.

That said, I still enjoyed watching the movie. I laughed like an idiot at some of the more satirical parts and couldn’t help but get a laugh at the audacity of the film to feature a villainous child that curses and murders with no remorse. Obviously, that will not be to everyone’s liking. In fact, if you read critics’ reviews from the time of the film’s release, they found this to be just plain reprehensible. I thought it was hilarious that a movie that was aiming to be a blockbuster film would entertain such a ludicrous idea. The movie also features the fantastic Tom Noonan as a villain. Tom Noonan elevates anything he acts in and does fine work here if not at the same level as his turn in Manhunter. I also enjoyed the corporate dynamics within the Omni Corporation as they played out in the film. Miller had shown his eye for satire in The Dark Knight Returns and he demonstrates some of that in the film, even if he pulls a few of his punches.

At the end of the day, this movie is a bit of a mess. It is still entertaining and fun and filled my need for more Robocop in my life. While not a perfect sequel, it is impressive that this film was even made. For fans of the original, temper your expectations and you may find that this movie has a lot more to enjoy than when you watched it in 1990.

Robocop 2 arrives on Blu-ray with a 1080p MPEG-4 AVC encoded image in 1.85:1 from a new 2K scan. This is a great example of how great Shout Factory can do when they have great source materials. The film has never looked better. Fine detail is pretty good and this is a colorful film that displays very well on a big screen. Fans should be very pleased with the results!

Robocop 2 has a great sounding DTS-HD MA 5.1 track that will sound great coming out of your speakers. While I personally prefer Robocop’s soundtrack by Basil Poledouris to Leonard Rosenman’s score for the sequel, this surround track does a great job of replicating the sound design from its theatrical release. This is essentially a perfect replication of that track.

Robocop 2 is by no means a perfect film. It is still an entertaining film with some great and some terrible ideas. I would give the movie about a “C” average. Shout Factory have done such an incredible job on this release with excellent transfers that I have no choice but to give this collector’s edition a high score. If you are not a fan of the film, a rental is recommended. If you are a fan, you should probably buy this immediately and start watching the amazing special features on the disk. They are well worth your time.