Rudy Duncan (Ben Affleck) has spend a few years in prison, thanks to a conviction for grand theft auto, but his freedom is just around the corner. In a matter of mere days, he will leave the prison a free man, but he has very little to look forward to, aside from being out of that hellhole for a change. His cellmate Nick Cassidy (James Frain) also gets released that day, but he has some good stuff waiting on him, in the form of Ashley (Charlize Theron), a beautiful young woman he met through a prison pen pal system. Ever since Nick started sending her letters, Rudy has had to listen to how gorgeous and wonderful she is, which drives him insane, as he knows he has no one to take that place in his own life. But when Nick is killed just before the two find freedom, Rudy sees Ashley and makes a rash decision, to pretend that he is Nick. Soon he is living a fun life with Ashley, filled with sex, romance, and affection, but that all ends when Gabriel (Gary Sinise) shows up with his cohorts. You see, Gabriel wants to use Nick’s knowledge of a casino to help him rob the place, but what he doesn’t know, is that Nick is dead and that leaves Rudy, who knows nothing about the casino. How long will Rudy try to keep the facade alive and when he comes clean, how long will Gabriel allow him to stay alive?

This is the second disc issued for Reindeer Games and this time, we’re given an extended director’s cut, although that’s not true in every sense. This version contains over twenty minutes of added footage and various small changes, but director John Frankenheimer was still forced to shorten the sex scene, so this is not an uncut edition in the end. So how does this extended edition compare to the theatrical release? I liked the flick at theaters, but it seemed to be rushed at times and that is evident here, as we see extended scenes often. The film takes on a meaner stance and seems less humorous at times, which adds a lot of tension and attitude to certain instances. Of course, the twenty minutes of added footage alters the movie a lot, but the small changes also add up and enhance the picture’s edge. In other words, Reindeer Games is much improved with these new changes and I think fans will be very pleased with this disc. But if you didn’t like the flick to start with, I doubt this new edition will win you over, although it is worth a second look. I commend the studio for allowing Frankenheimer a second release, as it really offers fans a chance to own the definitive version of Reindeer Games.

Being a director’s cut, why not take a look at the director, John Frankenheimer? A lot of people have said his work has went downhill and that’s true to an extent, but I still think Frankenheimer has the skills to deliver the goods. While Reindeer Games lacks the substance and social messages of some of his earlier works, it comes up big in terms of style and fun, which is important as well. It is true that this film uses a thin storyline and asks us to accept some pretty outrageous stuff, but it never pretends to be more than an entertaining action flick, so I can’t find fault with it there. Frankenheimer makes sure this one comes through with action, visuals, and entertainment, which I think more directors should look into doing. I love Frankenheimer’s more substantial efforts of course, but I think this film offers a lot also, so long as you watch it in the right mood. Other films directed by Frankenheimer include The Manchurian Candidate, Ronin, Grand Prix, Seven Days In May, and The Train. The cast here includes Charlize Theron (Men of Honor, Trial and Error), Gary Sinise (Snake Eyes, Forrest Gump), James Frain (Titus, Elizabeth), Danny Trejo (Con Air, Animal Factory), Donal Logue (The Patriot, The Tao of Steve), and Ben Affleck (Armageddon, Phantoms).

It’s been a while since I’ve seen this film and even that was on standard DVD. When looking at this Blu-ray offering (the second incarnation of this film on Blu-ray, I might add), I was somewhat disappointed. By and large I try and find the positive in the movies I watch when it comes to visuals, but Reindeer Games really doesn’t seem to offer any improvement on the DVD. The film looks dark and though the 2.35:1 AVC HD image does look a bit shaper at times, it seems to look overly sharp during the majority of the film. There’s also a bit of artifacting and black levels don’t seem very consistent. These Miramax re-issues by Lionsgate are often steps up in terms of quality from their DVD counterparts, but this one has left me scratching my head.

Putting aside the video presentation, the DTS HD Master Audio soundtrack is a breath of fresh air. There are plenty of opportunities for this lossless mix to stretch its proverbial legs and surrounds really get in on the action as well. LFE are heavily involved and dialogue is crisp and sharp (even for a notorious mumbler like Ben Affleck). I felt that the soundtrack could have possibly sounded better, but I was by no means left wanting a whole lot more. At least this wasn’t a total bust on the technical side of things.

The exact supplements found on the DVD are again present here, as is the case with most of these Lionsgate releases. The main draw with this disc is the extended cut of the film, which isn’t an extra in the usual sense, but I figured I should mention it here nonetheless. You can listen to an audio commentary by director John Frankenheimer, which is different than the track found on the original release. In this version, Frankenheimer focuses on the differences between the cuts, as well as a little talk about how he was still forced to shorten the sex scene. If you want to hear about production details, cast & crew, and such, then the commentary track on the original release will be more to your liking than this one, I think. This disc also houses the original theatrical scenes, which means you do some comparisons of the original and extended editions, very cool indeed. Also included is a brief behind the scenes featurette and of course, the film’s theatrical trailer. 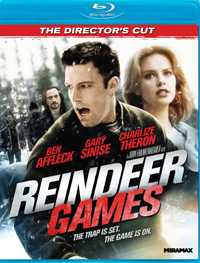