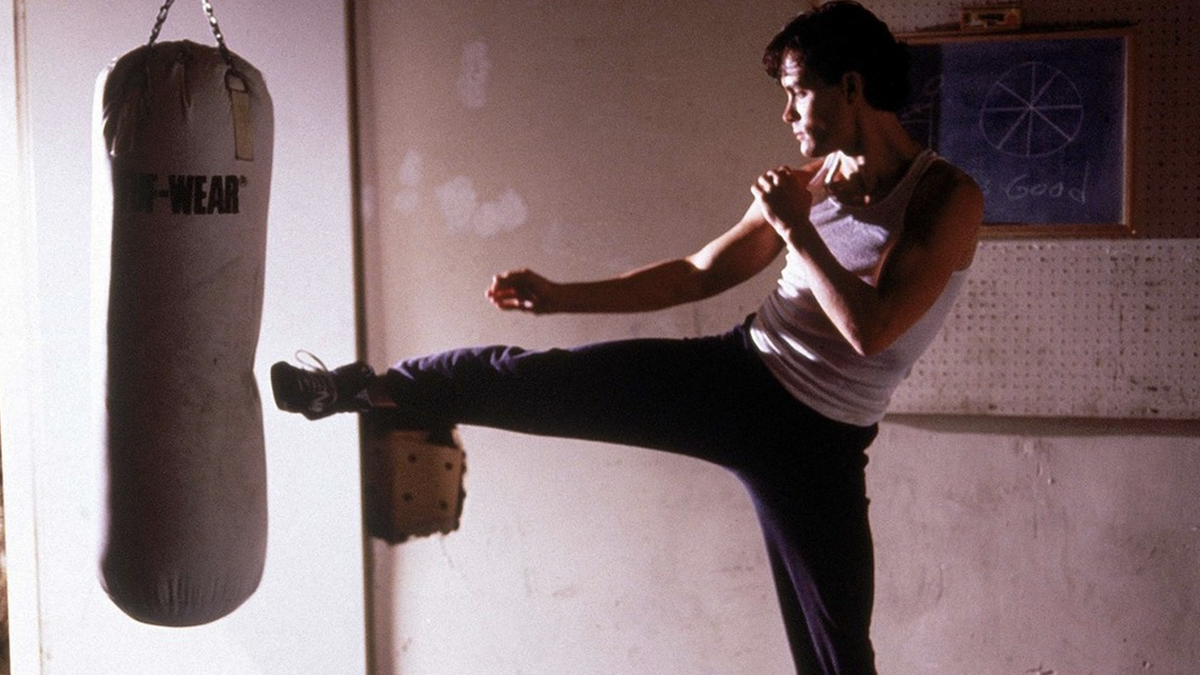 I had eagerly awaited the release of this film because I have a soft spot for action films from the early Nineties. I distinctly remember bouncing around on my big brother’s bed pretending to be Brandon Lee in The Crow at the tender age of nine years old. I had accidentally walked in on my brother and his friends watching their VHS copy of The Crow and that three minutes was all I needed to light up my imagination for months. If I was jumping on a trampoline, you can guess who I was imitating. When my copy of Rapid Fire arrived, it was an automatic reflex to throw it in the player and check it out.

The film begins somewhere in Asia where heroin kingpin Kinman Tau (Tzi Ma) has grown too big for the comfort of his former employer, mafia don Antonio Serrano (Nick Mancuso.) When Serrano issues an ultimatum to Tau to give him a bigger piece of the action, Tau refuses. The film cuts back to America and revolves around art student and martial artist Jake (Brandon Lee.) Jake’s father was killed in Tieneman Square a few years earlier and he is haunted by his father’s death. People constantly try to use Jake as a face for their causes. Jake is invited by a model from one of his art classes to a party. The party is held by one of Kinman Tau’s men. Jake becomes the key witness to a killing carried out by Serrano at the party. This killing is unique because Serrano very rarely kills men himself. Jake barely fights his way out of the party after Serrano makes eye contact with him. When the FBI interrogate Jake, he shows them a drawing of Serrano. They take him under their protection. With less than two days before Serrano and the Cosa Nostra go to trial, the bureau sends Jake to Chicago to testify against Serrano against Jake’s will by threatening to implicate him in the violence that ensued at the party if he fails to cooperate. In Chicago, Jake’s detail is wiped out by dirty federal agents and he is labeled a cop-killer. After escaping his assailants he encounters detective Karla Withers (Kate Hodge) under stressed circumstances. After momentarily taking Karla hostage and proclaiming his innocence, he escapes from the police and the bureau. Luckily, Lieutenant Mace Ryan (Powers Booth) has tapped the line of FBI Agent Stuart (Raymond J. Barry) so he is able to convince Jake to come with him and clear his name while putting away Serrano and Stuart.

Rapid Fire is a lot of fun. The film benefits heavily from the charisma of the young star and his lineage. The film drops a couple noticeable hints that Brandon is Bruce’s son by having him draw a dragon behind a nude in one scene and in one scene he is instructed to use his “fists of fury.” These fun throwbacks to Bruce Lee are part of the fun, but also a painful reminder that Brandon and Bruce both had so much potential when their lives were cut tragically short. Brandon also was involved with this project before it had been written and was able to help to shape the character in his image. Brandon displays some of his father’s amazing martial arts ability and his unbelievable ability to flip on command. He also looks like a Californian. If Brandon had been able to live into his later years he had the potential to be a huge star. This film is a good reminder of the promise he displayed.

To harp on Brandon Lee sells the film a little bit short. The film also features a great turn by the underrated Powers Booth. Booth was probably at his best in the film Frailty, but this film features him in a great supporting role. The beautiful Kate Hodge has natural chemistry with Brandon Lee and is fun to watch on screen. Another great supporting actor is Raymond J. Barry. I loved Raymond Barry in Justified and Walk Hard, but it was fun to see him in another role.

The film itself is directed with panache by Dwight H. Little. Little had just directed the classic Seagal film Marked for Death and was a perfect choice for directing the film. The script by Alan McElroy perfectly suits the strengths of Brandon Lee and allows for some great action sequences. Fans of early-Nineties action films will feel right at home here. They just don’t make action films as entertaining now as in their Nineties heyday. I thoroughly enjoyed it.

Twilight Time have done an exceptional job here. Rapid Fire blasts onto Blu-ray with a 1080p MPEG-4 AVC encoded image in 1.85:1 from the original elements. While I was watching the film I was continually impressed by how good the film looked. Many films from the era of Nineties action have pretty soft images, but Rapid Fire boasts a strong-looking and detailed image that was obviously shot on a good quality film stock. This transfer exhibits a healthy amount of grain and is reminiscent of the film The Professional in how the imagery on screen looks. Fans will be pleased.

I didn’t know what to expect out of the DTS-HD MA 2.0 track for Rapid Fire. I was very surprised at the quality of the track. I would have guessed that this track was a 5.1 track from all the activity in it, but it is just a good example of using stereo to the best possible effect. This track has excellent clarity of dialogue and the score by Christopher Young sounds great. The sound design was impressive for the time and holds up well, although it is not going to compare to the surround featured on films later in the decade.

Despite my affection for The Crow, I had never seen Rapid Fire. I am happy to report it is a charming action film with the great Brandon Lee front and center. Fans of the film will be glad to see that the new video transfer looks great and the stereo track is surprisingly good. Twilight Time have also included an incredibly interesting commentary track with the composer of the film. Highly recommended for action enthusiasts and fans of Brandon Lee.