Tom Mullen (Mel Gibson) is a man of wealth, with a high social profile and a family that he loves above all else. So when his high profile lifestyle causes his family to be shattered, his mind is pushed to the edge and beyond. Mullen took his son Sean (Brawley Nolte) out to have some fun, but when his attention was diverted, a tragic plan unfolded. Sean was taken by some criminals in the crowd, which left his parents helpless on the scene. His abduction was well planned and executed, as no clues or evidence were found. As Tom and his wife Kate (Rene Russo) panic, an expert on abductions, a man named Hawkins (Delroy Lindo) arrives. The scenario is laid out for the parents, but Tom is unable to cope with his loss. When a ransom demands two million dollars, the father is all too willing to pay, even against the wishes of the authorities. But when the exchange is foiled, Tom is left to assume the worst about his son. Unable to sit and wait until his son is dead, Tom decides to make a bold move. He goes on television to address the kidnappers, then turns his attentions toward anyone within earshot. The two million dollars is no longer a ransom, instead it is a bounty on the heads of those behind the abduction. With the tension hitting all time highs, will this move prove to be brilliant, or just plain stupid?

Ransom has had a long and winding road to Blu-ray as the original disc was plagued by a less-than-stellar non-anamorphic transfer.  This was partially rectified by a re-release which had some extras, but still no new transfer.  Believe it or not, we’ve had to wait until the 15th Anniversary of this film just to see it enhanced for widescreen televisions! The movie itself is a rare example of a formula picture that works, as the tension is thick and even when we know what lurks around the corner, the movie remains effective. Ron Howard (Splash, The Missing) supplies solid direction, but it is his cast, led by Mel Gibson, that makes Ransom work. Gibson is on his game, while costars Rene Russo, Gary Sinise, and Delroy Lindo are in fine form, not to mention a few terrific performances from those with smaller roles. Ransom is by no means a classic, but it beats the odds and works far better than it should.

These days, he is in the spotlight for his direction of the controversial The Passion of the Christ, which has risen to astronomical levels of performance. But Gibson is no stranger to financial success, as most of his films have been hits. In Ransom, he takes on a common role in his career, one of a normal man pushed beyond his limits. Gibson is skilled at walking the line, which is a demand for his performance here. He has to be normal and a likable person, but at the same time, under so much emotional stress, his mind starts to bend. The role is played out well and Gibson tows himself in at times, which was a smart move. If he worked the part too over the top, the dramatic side would be lost. But at the same time, he had to infuse some bold edge into the character, or else his bold gambles wouldn’t make sense. In the end, Gibson nails the part and leaves minimal room for complaints, a more than solid performance. Other films with Gibson include Mad Max, Conspiracy Theory, Braveheart, Signs, and The Patriot. The cast also includes Rene Russo (The Thomas Crown Affair, Lethal Weapon 4), Gary Sinise (Forrest Gump, Mission to Mars), and Lili Taylor (Casa de los Babys, Short Cuts).

As was remarked, Ransom has had a long and winding road to get to Blu-ray and for those that have been waiting on a new transfer to dazzle them – the wait is over. Yeah, it took a decade and a half but again I say – the wait is over! The 1.85:1 AVC HD image looks, for the most part, very good. There’s a minute bit of grain on some of the scenes which gives the film a bit of a dated look, but contrast and black levels are both well-defined. Detail has been improved and even then we can see Mel Gibson’s forehead wrinkles! Some of the darker scenes do tend to suffer with the slightest bit of noise, but overall it’s what we’ve been waiting for. Will it blow you away? Unlikely. But it’s the best the film has ever looked and that’s all we can ask for.

The DTS-HD Master Audio track is about what we’d expect. It manages to combine all of the elements of an action movie with that of a drama. There are some chase scenes which give the surrounds a bit of a workout and dialogue, as expected, is crisp and clear free of any distortion. Like so many other films of the genre, it doesn’t particularly excel at any one area, rather is a good mix (pardon the pun) of several different elements. Gibson’s deep, robust voice sounds strong out of the center channel and the score manages to make some of the scenes a bit more exciting. It’s a good, all-around mix, though nothing particularly too memorable.

The supplements are ported over from the previous DVD so while its disappointing that no new extras are found, the ones that are included aren’t too shabby. Director Ron Howard gives a nice commentary track, though his pauses do tend to grate on the nerves just a bit. There are a few deleted scenes as well as two short featurettes: “What Would You Do?” in which we get some comments from the cast and crew as well as Howard and editor Dan Hanley. “Between Takes” is just that, some behind the scenes footage with Howard’s interaction with the crew and a little too much information about Rene Russo. The trailer is also included. 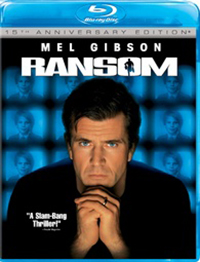