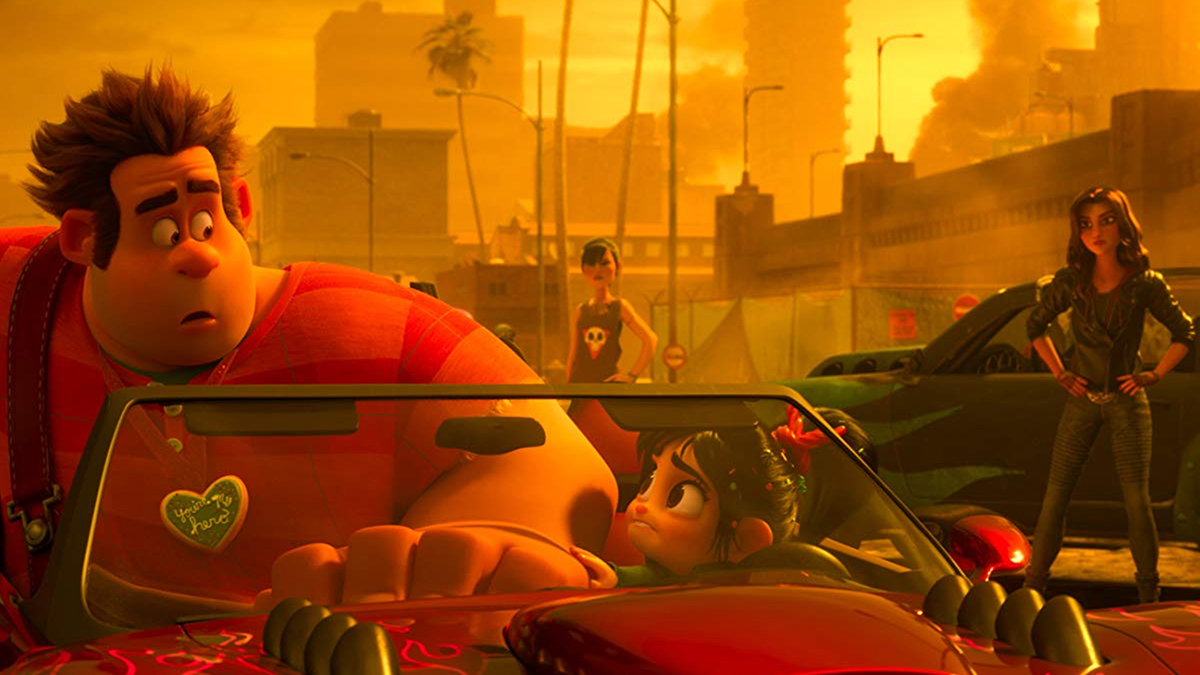 In 2012, Disney brought us Wreck-It Ralph, a modern animated film with its roots back in the hay-day of the video game boom – the 80’s. We were treated to bits and pieces of games like Pac-Man, Tapper, Frogger and the like, but the film showed that it had a lot of heart. It was clever, funny and had a variety of top notch vocal talent to boot. But Disney films tend to wrap things up so when a sequel comes along, it’s difficult to open the doors again.  But if one studio has figured out how to cash in on something, it’s got to be Disney.  Six years have passed and we’re now treated to a sequel. The talent has expanded, but John C. Reilly and Sarah Silverman both return to their respective roles once again.

Ralph (voiced by John C. Reilly) and his diminutive BFF Vanellope (voiced by Sarah Silverman) are living happily ever after. But Vanellope’s boredom causes Ralph to alter her game, thereby breaking it. They search for a new part and find it – on eBay. The addition of WiFi to the video arcade allows the duo to step into the innards of the internet. Dwarfed by the large corporate structures like Google and Amazon, they find and purchase the part, only to be told they’ve got to fork over the cash (real, not virtual) for it. Not having any funds, they embark on a mission to retrieve Shank’s car from Slaughter Race. But Shank (voiced by Gal Gadot) is having no part of it. Will Ralph and Vanellope be able to find their part and/or escape from the internet?

There’s a lot to like about Ralph Breaks the Internet, but there’s also a big part of me that asks why they made it? The first one was fine, it was nominated for Best Animated Film (it lost to Brave). And there are some truly funny sequences in the film. The scene with the Disney Princesses is priceless. Seeing them wear shirts with obnoxious sayings on them like “Just Let it Go”, “NOLA” and “Nap Queen.” Who knew Disney had a sense of humor? The vocal talent is top notch, though some of the familiar faces from the first film don’t have much of a role here. Jane Lynch and Jack McBrayer do reprise their roles, but we’re now treated to the likes of Taraji P. Henson and Gal Gadot. Ralph Breaks the Internet is clever, no doubt about it, but it also seemed unnecessary. If this type of film is your cup of tea, you’ll enjoy it. Otherwise there are plenty of other Disney films to choose from.

It’s a daunting task to visualize the internet. But Ralph Breaks the Internet probably does as good a job as any. Disney’s 2.39:1 AVC HD image looks amazing, with crystal clear visuals that showcase immense depth and detail. Even minor visual cues stand out, which really allows the film’s world to come alive here. The colors are bold and vivid, contrast is even handed, and I saw no flaws whatsoever. The movie looks simply spectacular and fans are in for a real treat here. Different color hues, such as the Slaughter Race sequence, really stand out from the detail-oriented scenes of the internet. All in all, it’s what we’d expect for a film of this nature.

The 4K version contains a Dolby Atmos soundtrack, but the Blu-ray has a DTS HD Master Audio mix that’s still sure to please. The movie has a lot of surround presence, such as the Slaughter Race sequence which features explosive audio, as well as more subdued, but just as important sound elements. So yes, your home theater will spring to life and the surrounds will get a nice workout, but this isn’t just a loud mix. The subtle cues are well handled and general atmosphere is effective, so the track is creative and memorable. The music is well placed and supports the movie quite well, while dialogue is clear and always easy to decipher. This works out particularly well when you’ve got a dozen Disney Princesses all waiting to burst out into song.

While not as enjoyable as its predecessor, Ralph Breaks the Internet is fun, clever and gives us a visualization to something we all use every single day. The vocal talent is top notch and delivers as does the disc with reference-quality video and audio. This delivers the goods on all levels, though my money is still on the original.