I don’t believe I’ve seen a movie as relentlessly violent as The Raid 2. Those familiar with the original film should have a basic idea of what they’re in for. All others? You’ve been warned. Not only is this movie considerably longer than its predecessor (150 minutes), but it nearly doubles the violence. This is full-on R rated mayhem here that makes zero apologies for being what it is. An apology for its excessive run time might’ve been welcome, but you can’t say the film doesn’t deliver. You might even wish it delivered less. Don’t expect subtlety here. I felt that the recentTransformers film would never end, and I can’t say I didn’t get those feelings with this film either. It’s been a while since I’ve seen the original film, but this time Rama (Iko Uwais) goes undercover. He declines at first, but quickly realizes that he’s in more danger by declining this offer. In order for things to not look suspicious, he serves some jail time. His goal is to get close to Uco (Arifin Putra), and ultimately befriend him to infiltrate his father’s mafia organization. The two spend time in prison together before the film flashes forward two years. This is the basic setup, but there are a lot of various subplots on display here. Ultimately, it’s the action that I think most fans will watch this for, and on that level it more than delivers.

I admire that this sequel gets two things right. It gives us more of what fans of the first film want, and it also avoids giving us the same movie. It takes things in a different direction. I still prefer the original film, but I think this one should satisfy fans, some might even prefer it. One aspect of the original film that I enjoyed is that it took place in an enclosed setting. That added a level of suspense that’s often missing from these types of films. In fact, the recent Dredd basically took the framework of the original film and ran with it. I still enjoyed Dredd quite a bit, however. I think there’s a point where some audiences will begin to tire of the mayhem seen here. It becomes headache inducing after a while and is too long for its own good. There’s just not much of a story to exceed 2 hours, but this film goes well past the breaking point for me, at least. Fans of the original film should check it out, but I think I’d much rather return to the original film before this film any day. It’s not bad by any means, but it’s simply too much of a good thing.

Having not seen its predecessor, I was anxious to see how The Raid 2 looked on Blu-ray. Thankfully Sony didn’t disappoint with their 2.40:1 AVC HD image. In fact, this is probably one of the most polished, fine-looking live action films I’ve seen in a while (and Blu-ray itself has raised the bar considerably).  Don’t let the opening sequence fool you with its dingy, grayish palette. Detail is razor sharp, colors are bright and bold and the use of slow motion during the fight scenes seems to make a considerable impact on the overall transfer. I really could go on and on, but I’ll just say that this is one that won’t disappoint.

A perfect compliment to the amazing video is a near flawless DTS HD Master Audio soundtrack that really never lets up. Naturally there are lot of fighting sequences with every channel engaged on some level. Vocals (assuming you chose the correct audio option) are top notch, crisp and clear and surrounds are almost constantly offering up some sort of support.  From the booming shots to the little discrete effects, the film is an example of just how good a movie can both look and sound on Blu-ray. Perfect.

As good as the reference-quality audio and video are, The Raid 2 also contains a decent share of supplements mixed in with some Blu-ray exclusives. Let’s take a look. 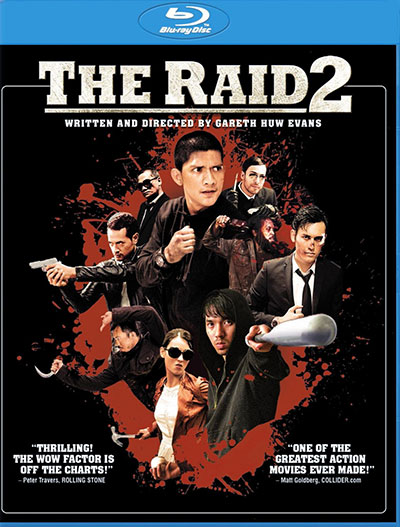