Ragamuffin tells the true story of Rich Mullins. He’s perhaps best known for his Christian song, “Awesome God”. The film begins in the early 1960’s and we learn that Rich grew up on a farm. His dad is overly strict on him, but Rich also admits that he never saw himself as a true farmer. We’re treated to a fairly linear form of storytelling here as we follow Rich from a young boy to the tragic car crash that claimed his life on September 19th , 1997. Rich was only 41 years old at the time of his death. Michael Koch plays Rich in the film, and offers a running narration throughout the majority of it. I like that it doesn’t always try to paint a pretty picture of Rich, and we can see that he’s far from perfect. Not everyone is a fan of the way he adds sermons between singing many of his songs. He also doesn’t always get along with the record producers who try to sculpt his sound. We’re shown that Rich also doesn’t care about his fame and fortune so much as living his life as he feels Jesus wants him to live.

I can’t say that I’m a fan of the songs that Mullins wrote, but I respect that he has his fans. I have never been into christian music either. The film does a nice job of giving an honest look into Mullins life, but it’s still too long, and overly preachy at times. It’s sometimes hard to fault the film of this nature for that, but a more subtle approach might’ve worked better. The narration can also be a bit too forward at times. I wish the film just let things play out rather than have the narration remind us of what’s happening or how we should feel. Koch does a good job at playing Mullins, but the character himself started to annoy me after a while. He walks around in ratty clothes and looks like he’s long overdue for a shower. Whether this is how Rich was in real life is unclear. A small feature on this disc (more on that later) explains that the reason we see Rich drinking and smoking (among other things) in the film is because they wanted to remain accurate to his life. Ultimately, I can only recommend Ragamuffin to those who have a strong affection for Rich Mullins. It has its heart in the right place, but at the end of the day, it did little for me.

For a smaller scale film this sure looks nice in HD. With the exception of some minor grain late in the film, things are otherwise flawless here. Colors are all nice and smooth, details remained strong throughout as well. The image is AVC encoded with a 1.85:1 ratio. As mentioned, some grain can be seen in a short sequence late in the picture, but it’s nothing too distracting. The print is nice and clean as well. Flesh tones looked accurate with no over-saturation of any sort. This transfer will please fans of the film.

We get an acceptable DTS HD track. It serves the film as you would probably expect. Vocals are solid and the music is what shines through the most. We can hear background chatter during a number of occasions, and the music really involves us with the experience as well. This is mostly a front loaded affair, but nothing seems retrained. The track works well for the film. 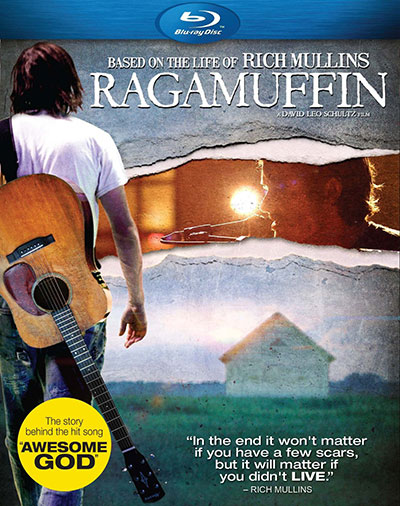