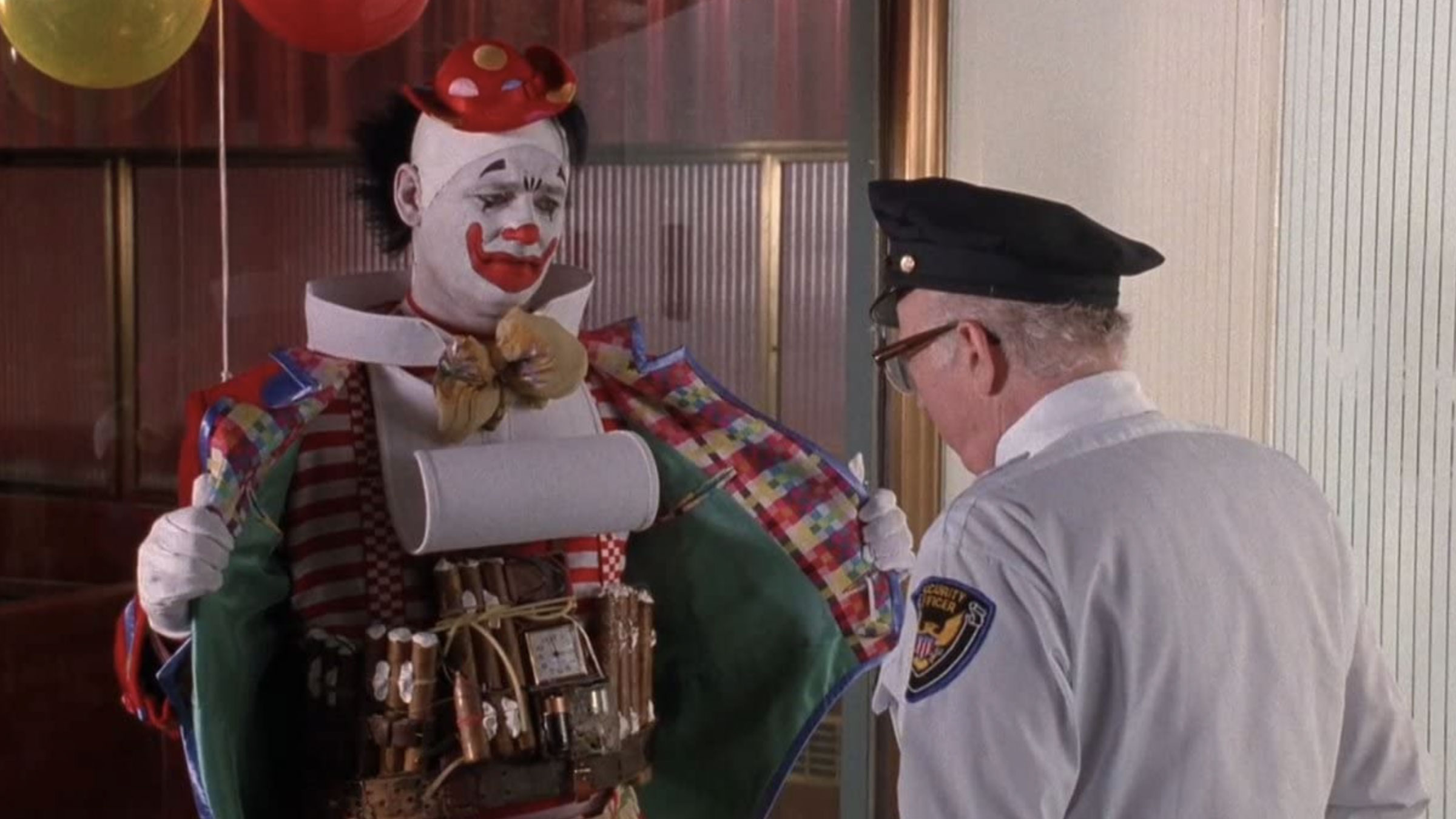 Bill Murray has long been one of my favorite actors. He starred as Carl Spackler, the psychotic groundskeeper in my favorite film Caddyshack. I enjoyed Stripes as well and we all know what Ghostbusters is the movie that really made him an A-List star. But after that things went a bit…south for the actor. There was the obligatory sequel with Ghostbusters 2 and though I liked it, many didn’t care too much for Scrooged. So Murray took some time off. He collaborated with writer/director Howard Franklin and, as a result, we’ve got Quick Change. I remember seeing it in theaters and loving it and very little has changed in the three decades since.

Murray plays Grimm, a disgruntled city worker who’s fed up with life in the Big Apple. Dressed as a clown, he and his two literal partners-in-crime: Phyllis (Geena Davis) and Loomis (Randy Quaid) pull it off without a hitch. The cops are fooled and all the trio has to do is make it to the airport where they can spend their riches. But getting out of New York is easier said than done. They get lost, encounter a motley crew of supporting characters and through a mistake by Loomis, the cops are now onto them. It’s a race against time to see if they can get away with the perfect crime.

Truthfully, there’s not a lot to Quick Change. And that simplicity makes the film work. Clocking in at only 88 minutes, there’s a lot going on in that timeframe. The film’s colorful ensemble cast makes the film work as much as the main three. If you’re looking for early appearances by Stanley Tucci and Tony Shalhoub – there there. Phil Hartman has a noticeable cameo and I’d be remiss if I didn’t mention the legendary Jason Robards as the police chief. There’s no easy way to describe this film other than it’s more of mashup between Dog Day Afternoon and Martin Scorsese’s After Hours (both required viewing). If those kind of film’s are up your alley and, by some chance, you’ve missed this one – there’s no time like the present.

It’s been a while since I last saw the film and I have to say that the efforts of Warner Archive have paid off. The film has gotten a new HD master and it shows, on the most literal level. Early 90’s New York City looks tired, beaten up and grimy – the way it used to be. The 1.85:1 AVC HD image seems cleaned up with minimal dirt and debris, naturalistic looking flesh tones and strong, consistent black levels. It’s not perfect, mind you, but by far the film has ever looked on any home video format. As is the case with most of Warner Archive’s offerings – this one doesn’t disappoint.

Nothing too shocking here as we get a DTS HD Master Audio 2.0 mix that does an acceptable job. Vocals are faithfully reproduced and I noticed no distortion in either of the channels. There’s a lack of sonic range here (for obvious reasons), but manages to do what it’s supposed to – provide a nice, adequate soundstage that doesn’t distract the viewer. This film will never be known for dynamic audio, but what we’ve got here does the job just fine.

Quick Change relies on a great script, the talent of the three leads as well as a very colorful ensemble cast. So, in essence, the whole package. I’ve always enjoyed this movie and I have to say that it’s about time that it finally hit Blu-ray. The picture quality has a substantial improvement over the DVD and audio is just above average. It’s a shame that the only supplement is the theatrical trailer, but it’s better than nothing.