I commented when I reviewed Purge: Anarchy that I felt it improved upon the first Purge film. The first film I felt had a terrific premise, but then resorted to being little more than a home invasion thriller. Anarchy rectified this problem by moving the action outside to the streets where it’s free game for all. That was something that an idea such as crime being legal for 12 hours could really feel unleashed. This second sequel, Purge: Election Year continues on that to become another satisfying sequel. One that also continues to follow a character introduced earlier on. Ultimately I think I still prefer Anarchy over this one, but this one still packs quite a punch.

We begin with a young Charlie Roan (Christy Coco) and her family tied up. In a cruel game, her entire family is murdered in front of her with Charlie being the only survivor. We then flash forward to 18 years later where Charlie (now played by Elizabeth Mitchell) is a U.S. Senator running for President. Clearly that childhood event had an extreme effect on her, and she hopes to end the annual Purge nights once and for all. Former police sergeant Leo Barnes (Frank Grillo reprising his role) is appointed to protect Roan during the purge night as she’s a popular target. We’re introduced to a few locals as well, one of whom owns a convenience store. His name is Joe Dixon (Mykelti Williamson) and he learns that his insurance premiums have been raised far beyond anything he can afford. In other words: he’s screwed if something happens to his story during purge night. There’s a minor subplot where a couple of rowdy girls try to steal a candy bar from Joe’s store. They’re caught, but let off the hook. They then set their sights on Joe when the purge rolls around. After a close encounter, Leo and Roan have to leave their location and seek shelter elsewhere. This is when their paths cross with Joe and his crew. Eventually they’re all helping each other through the remaining hours of the night. Many who are for the purge view Roan as a threat, and she is targeted.

I feel Election Year works best when it the focus is on the characters simply trying to survive. I feel it loses some steam in the last act when it lays the politics on a bit too heavy. It’s not a deal breaker in my eyes, but it does take away from the proceedings a little bit. I understand these films are trying to tackle serious issues, but I feel it best when the focus is simply on the carnage and survival. These really are something of guilty pleasures, but when they get a bit too serious, that’s when they lose me a bit.

We get a solid transfer here that delivers the goods. Universal can be hit or miss, but thankfully this is more of the former. You’ll get plenty of blood splatter, and that is delivered with sharp detail throughout. The print is fine and colors are on point. Fans and casual viewers should find this transfer satisfying. The image is AVC encoded with a 2.40:1 ratio.

The DTS HD track is also pleasing, helping to create an involving atmosphere. You’ll get a lot of range during many of the action sequences. These all prove to be engaging and have a crispness to them. Vocals are also fine as well as background noise when it comes to street banter and approaching vehicles and what have you.

While not quite as satisfying as Anarchy, Election Year still improves on the original film to create an involving flick. It’s a bit too slow at times and the third act gets a bit too carried away with the politics, but it’s still worth viewing. I think there’s life left in this series, and a 4th film is scheduled for summer of 2018. Rent it. 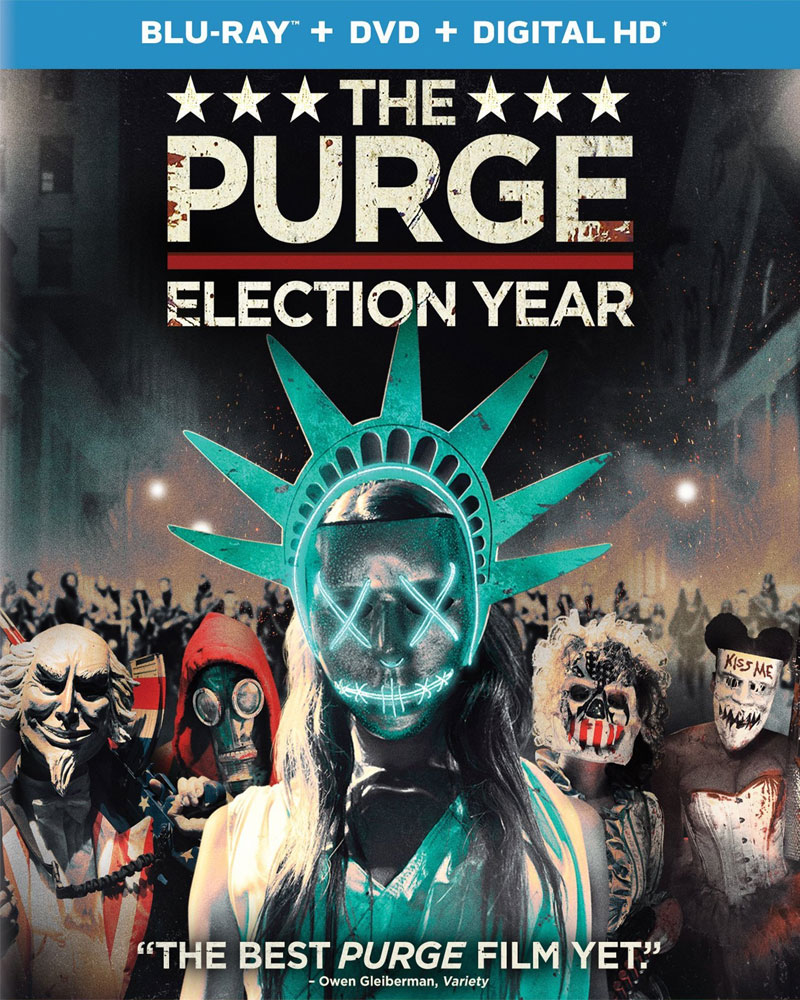