The names Adam Sandler and Paul Thomas Anderson might not have been thought to have ever been uttered in the same sentence together. That is, until a few years ago. Sandler, known for his slapstick comedy was a commercially successful actor, albeit in teen comedies. Anderson, on the other hand, has crafted some of our more appealing movies in the last few years. The homage to John C. Holmes in 1997’s Boogie Nights and the ultimate family portrait in 1999’s Magnolia in which several lives overlap (like the petals of a magnolia) and have consequences to the other. It was with sheer curiosity that I watched Punch-Drunk Love. Sandler essentially plays the same character that he always does, just in a very toned-down manner. All of his characters have him cast as a regular guy, but someone prone to losing it on a moment’s notice and then act like nothing’s wrong (how could we forget Happy Gilmore when he and Bob Barker get in a fist fight)? However, this is a more lonesome and sad version of those somewhat comic book-like characters that he has played time and time again. This is the Adam Sandler that lie within, yet no one knew that he could actually act…evidentially no one but Paul Thomas Anderson.

Sandler plays Barry Egan (a character in which I could swear he played by the same name in one of his CD’s). Barry is a mildly successful executive of his own company. He sells novelty toiletries to Las Vegas casinos (a plunger with dice on top and a clear handle with goodies inside). He has a relatively uneventful life and that combined with his seven sisters nagging him all the time, has made him somewhat depressed in life. He’s just recently discovered a scheme in which all he has to do is buy as much Healthy Choice pudding and this will allow him to take advantage of a marketing error with American Airlines. Calculated by Barry, it will take him $3000 to earn 1 million free air miles (essentially, enough to fly free the rest of his life), though he really has nowhere to go. Frustrated and lonely, Barry decides to call a phone sex line to have someone to talk to. But, in a strange set of circumstances, the phone sex company is actually a fraud and they call him back the next day and try to extort money from him. This, of course, is just half the story…

Despite all of the nagging from his sisters, they still do care for him (though they have a strange way of showing it). Though one sister tries to set him up with a friend named Lena (Emily Watson) from work. After a chance meeting that same morning (which she divulges was her attempt to meet him before she was “properly” introduced), the two seem to hit it off. The date, though, has consequences or so it would seem. This may very well be the essence of the love in the story. No matter how messed up Barry is (and he is), Lena seems to accept him for that and doesn’t judge him like everyone else in the world. He tells her of his phone sex episode and of his plan to get free mileage from Healthy Choice; but she’s not deterred in the slightest. How, though, are these two ever going to make it?

Punch-Drunk Love might best be remembered like The Truman Show in which it’s the first time that we see a usually comedic actor actually sit down and act. Is this a good thing? Who knows. I personally prefer Jim Carrey in movies where he is using his talents to entertain us as opposed to trying to win an Oscar. Sandler, though – this might be the start of something. It took Robin Williams quite a while, but he’s managed to straddle the fence as a sometimes serious actor and sometimes comedic actor. Could Adam Sandler be following in his footsteps? For the fans of Paul Thomas Anderson’s movies, and I’m one, this was somewhat of a departure for him. The movie is vastly shorter than his other outings and follows along somewhat of a different path as well. One thing is for sure, the “typical” fans of Adam Sandler won’t want to see this, as his rage is not meant to be comedic, but more of an act of desperation. An entertaining movie, yes, is it for everyone – no.

Punch-Drunk Love has been presented in it’s original 2.39:1 aspect ratio and has been given a new 4K restoration by Criterion. The film, as is consistent with Anderson’s other films, shows the very wide scenes with such beauty that words find it hard to describe. Though one might think that a 95 minute romance movie would be shot in a more narrow aspect ratio, I agree with the choice here as the image(s) look great on screen. This is part of Columbia’s Superbit line and, as such, we should expect an above-average transfer…we get it. Only the darkest of scenes do anything to detract from what is otherwise a reference-quality transfer. The entire movie has a very “washed-out” look to it that is appropriate for the movie. Some of the scenes do tend to have a sharpness that looks almost “too clean”, but it’s nothing that detracts from what’s going on in the movie. As with Anderson’s other movies (Boogie Nights was colorful, then dark and Magnolia was just dark) the way this film appears on screen adequately reflects the mood of the particular scene, but thanks to the Superbit, we see it all in near perfection.

A new DTS HD Master Audio track has been included and the film actually had dual DTS and Dolby Digital EX (remember that?) mixes on the original DVD. Now don’t get me wrong here, this isn’t Saving Private Ryan here. For the most part, the mood of the film is very subdued and light on the audio. Dialogue is clear and free of any type of distortion, of course. During some key moments, and there are a few car wrecks and other moments of note, the surrounds kick in and do their thing and the LFE even has a few moments to shine.

No, hell isn’t freezing over. A movie starring Adam Sandler is a part of the Criterion Collection. It’s been a long time coming and I’d forgotten how good it actually was. As per usual, Criterion has done this title right and it both looks and sounds good. The new supplements only sweeten the deal and it’s another notch in P.T. Anderson’s belt that this movie is now forever immortalized as “one of the chosen.” 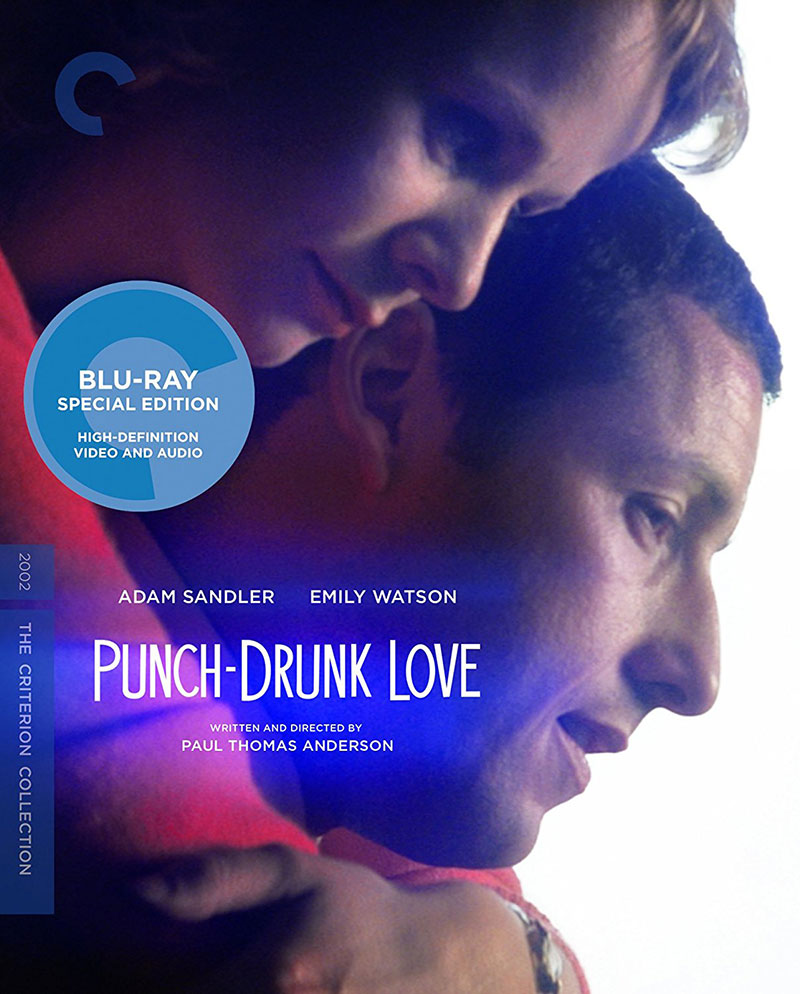