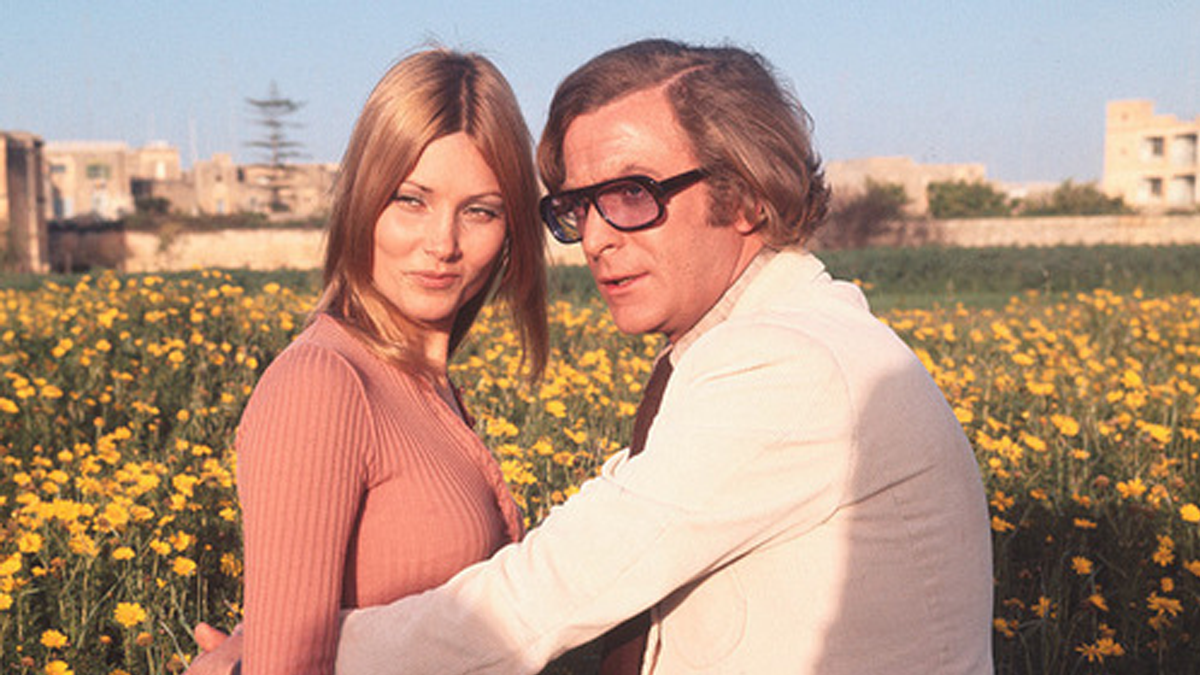 I have mentioned it before, but I grew up watching Dirty Rotten Scoundrels all the time with my family. It is still one of my favorite comedies of all time and my family quotes it on a daily basis. One of the main reasons that film works so well is the acting of Michael Caine. I have enjoyed Michael Caine’s work over the years, whether in Hannah and her Sisters, Deathtrap, or as Alfred in Christopher Nolan’s Batman Trilogy. Over the weekend, Arrow Video sent me a copy of the film Pulp, Michael Caine’s second collaboration with writer/director Mike Hodges that had teamed with him on the classic Get Carter. I had been curious about this film for a while, and was pleased to get a chance to see it.

The plot revolves around a pulp fiction ghost-writer named Mickey. Mickey is a ghost writer in the tradition of authors like Mickey Spillane. He writes novels with titles like The Organ Grinder and My Gun is Long under pseudonyms. While  out and about, Mickey notices that somebody seems to be tailing him. That is when he visits his publisher to see what type of work he needs to work on. A man named Ben Dinuccio (Lionel Stander) arrives at his publisher’s office. The man needs a ghost-writer for his client who must remain anonymous. His client is close to death and wants to be remembered. Mickey accepts the job, but the job demands that he follow directions to meet his anonymous client. Mickey must travel by bus to the final destination. He meets a man named Jack Francis Miller (Al Lettieri) on the bus who happens to be reading his novel My Gun Is Long. They talk for a little while. Inadvertently, he switches hotel rooms with the man when they arrive at the Hotel Albert. When Mickey runs back down to the room, he finds Jack Francis Miller dead in a bathtub. The next morning Jack Miller’s body has disappeared. Whoever had tried to kill Mickey had gotten the wrong man. Mickey meets his contact, a pretty woman named Liz (Nadia Cassini,) and finds out that the man he is writing for is Preston Gilbert (Mickey Rooney.) Preston Gilbert is a former actor with mobster ties. The good news is that the book will sell well – Preston slept with all the leading ladies in his films- the bad news is that somebody does not want his story to get out.

This film is a genre defying comedy. The film opens with two taxis in a fender bender and then their doors are knocked off by a passing truck. This opening lets the viewer know immediately that there may be a little bit of rough stuff, but it all will be in good fun. The film is a little bit meta – it makes fun of normal plot cliches like chance coincidences and other obvious tripe. This becomes even more clear and clever through the narration that is draped on top of the film by Michael Caine’s Mickey who is also a truly unreliable narrator. The film may not be laugh-out-loud funny but it succeeds at being clever at every turn. I don’t think there was one line in the film that I disliked.

When the film came out it did not receive much attention and was largely forgotten. It’s a shame, because this is an enjoyable little movie that has plenty to offer in terms of clever dialogue and a plot with plenty of unexpected directions. Michael Caine turns in an excellent performance as Mickey, delivering one-liners while wearing an off-white suit that would make Tim Wolfe proud. The direction by Mike Hodges is on-point with excellently framed shots by cinematographer Ousana Rawi. It is unfortunate that Ousama Rami was not given many great opportunities after this film, because he displayed a great eye for detail here.

This new transfer in 2K from the original prints by Arrow Video uses an MPEG-4 AVC encoding of the film in 1.66:1. This film holds up remarkably well. There is a fine level of grain that sometimes (okay, much of the time) borders on over saturated. That same level of grain leads to the film maintaining a great amount of fine detail. The cinematography in the film by Ousama Rami looks great and showcases some very interesting camera shots. Overall, this release looks pretty great.

Arrow Video have provided a good quality LPCM Mono track. This track for the most part has good clarity. The soundtrack by George Martin, the famed producer behind some of the Beatles’ best albums, is very enjoyable and very much of the time in which the film was made. While this track is very limited in scope, Arrow have done a fine job of cleaning up the track.

Pulp is a great little film that deserves to be rediscovered. It is quirky, off-beat, and clever in ways that not many films can pull off. Arrow Video have provided some great supplements that feel cut short by their lengths, but have excellent details within them. The transfer should make fans if the film happy. I was very impressed with this film and highly recommend checking it out.