John Frankenheimer was a fantastic director. When you think of Frankenheimer you probably think of some of his certified classic films like The Manchuria Candidate, The Train, Seconds, and Ronin. Your mind might also wander to some of his failures like The Island of Doctor Moreau, which is brilliantly documented in the film Lost Souls. Shout!Factory has recently released the John Frankenheimer film Prophecy. It is a creature feature that has some strong acting and beautiful scenery, but the creature itself may not inspire much horror for the viewers. I sat down and watched the film to see if it was a hit or a miss.

In Maine, near a lumber mill, a series of violent deaths have occurred in the nearby forest. An inner-city doctor named Robert Verne (Robert Foxworth) is contacted by an environmental agency to go to Maine to investigate the environmental impact of the lumber mill. He takes along his wife Maggie (Talia Shire) who is hiding her pregnancy from him because he has firmly stated that he does not want to have children. Arriving in Maine, the couple are introduced to Isely (Richard Dysart) who oversees the lumber operation. On their way to the cabin where they will stay, they encounter a group of protesting Native Americans led by John Hawks (Armand Asante.) In an intense encounter (that involves a chainsaw) it becomes clear that both sides are diametrically opposed to one another. John Hawks believes that the mill is poisoning his people and destroying his land. The lumber workers believe that the Native Americans are responsible for the grisly deaths that have plagued the forest. While Robert begins his investigation and begins to find some strange mutations in the wild, in the forest a huge mutated beast stalks the land.

This film is definitely a mixed bag. The first hour of the film is pretty strong. That is because the first hour relies on the actors and the beautiful scenery. The latter half of the film runs into the big issue that hurts the film – the creature looks fake. In the supplemental features, the creature was jokingly referred to as “pizza bear.” As the characters are put into a situation where they must flee the mutated bear, the film quickly begins to feel ridiculous. I am accustomed to watching all sorts of horror films so I did not find this to be a deal killer, but after the well-maintained sense of paranoia set up by the first half of the film, the second half cannot maintain the mood properly.

The best aspects of the film are the picturesque setting and the strong camera work by cinematographer Harry Stradling Jr. The film really evokes the huge nature of the northern wilderness well and that feels like an accomplishment. The acting is pretty good. I think that Robert Foxworth was pretty great as Doctor Verne. Talia Shire is convincingly distressed throughout the film. Armand Asante is enjoyable in his role although it may have worked better to cast an actual Native American for that part. That was not an uncommon practice at the time and Asante is definitely a dynamic actor, so it still works. Frankenheimer directs the film and crew well but the beast in the forest becomes less frightening as it spends more time on camera. When the beast is only seen in glimpses as it violently lashes out at hikers and workers, the creature can be effective and startling. The latter half of the film can not sustain the suspense from the first half of the film because the fake looking creature is present in so many shots. There is also a raccoon attack scene that made me laugh out loud and needs to be seen to be believed. As far as creature features go, I have certainly seen much worse attempts, but it does feel like the film loses some credibility as it moves along. The script itself should not be faulted for the way the film unravels. David Seltzer wrote the script after his hugely successful script and novel of The Omen. His vision was obliterated by the creation of the bear creature (for more info on this, the interview with Seltzer on this disc is incredible.) The bones of this film are good, it just didn’t fully translate on the screen.

Shout!Factory have given Prophecy a great looking AVC-encoded transfer in its original 2.35:1 aspect ratio. While the film’s merits are debatable, the cinematography of the film is very well done. The wide lens allows the immensity of the northern forests to shine on screen. Fine detail is very good and the film looks great on a large television. For a horror film, it is strikingly pretty. Fans should not be afraid to upgrade to this great looking presentation.

Similar to the video, the audio presentation on Prophecy is very well done. The film is presented with a DTS-HD MA 2.0 track. Of course, the film would have been aided by a 5.1 track, but the film used the score by Leonard Roseman effectively and had some solid sound-based jump scares. I was pleased with the track.

Prophecy is an uneven creature feature that has a strong setting and some good performances. The film’s creature hurts the latter half of the film by spending too much time on screen. I still enjoyed the film but could not help but feel that there was definitely a lost opportunity to sustain suspense in the second half. Shout!Factory has done an excellent job with this warts and all special edition of the film. The video presentation is superb, and the interviews are enlightening about the many difficulties the film faced. The David Seltzer interview is so compelling it almost warrants a purchase solely on the entertainment value it brings to the table. For fans of the film this special edition is a no-brainer, but for those newly acquainted with the film a rental may be recommended prior to purchase. 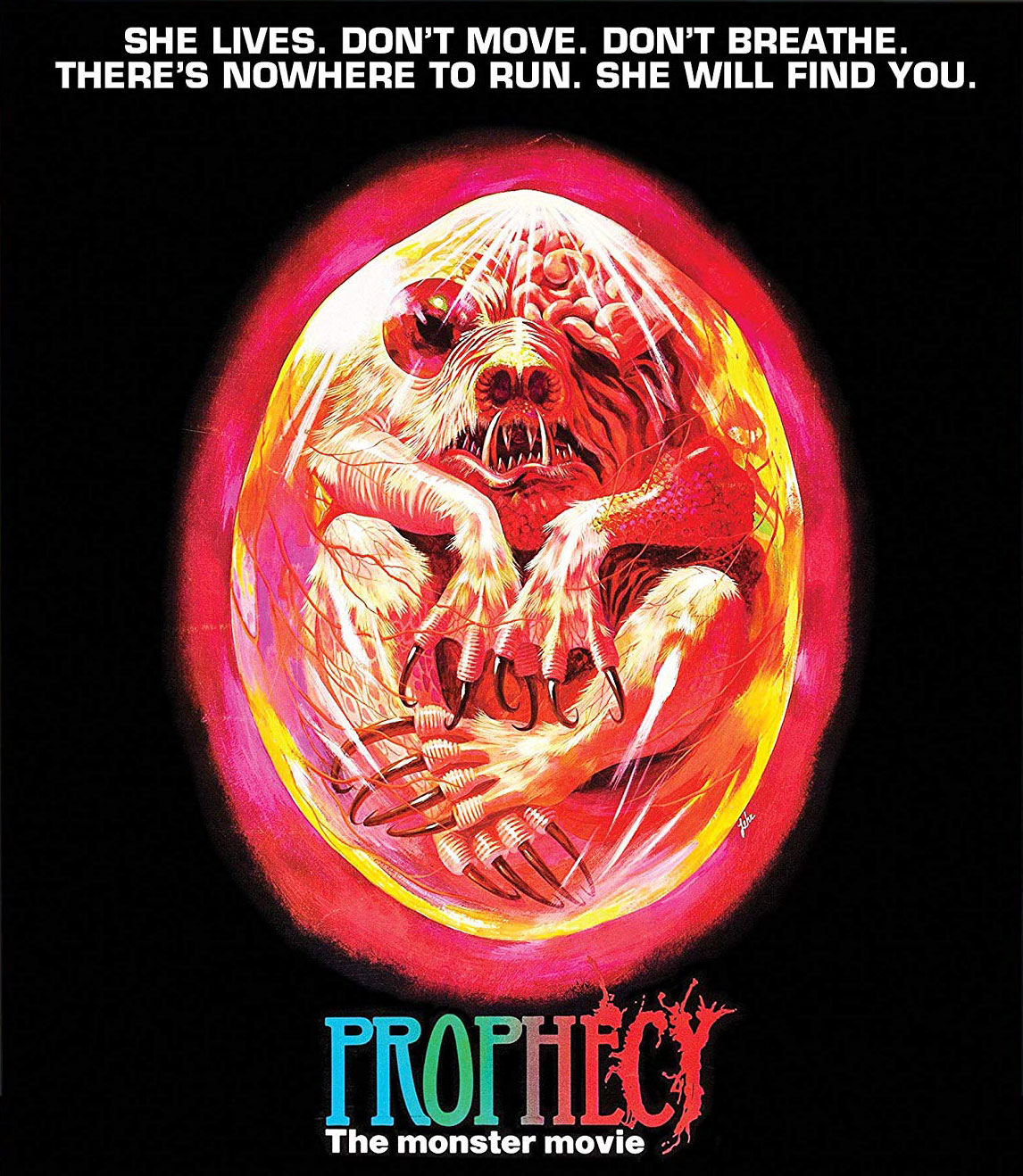