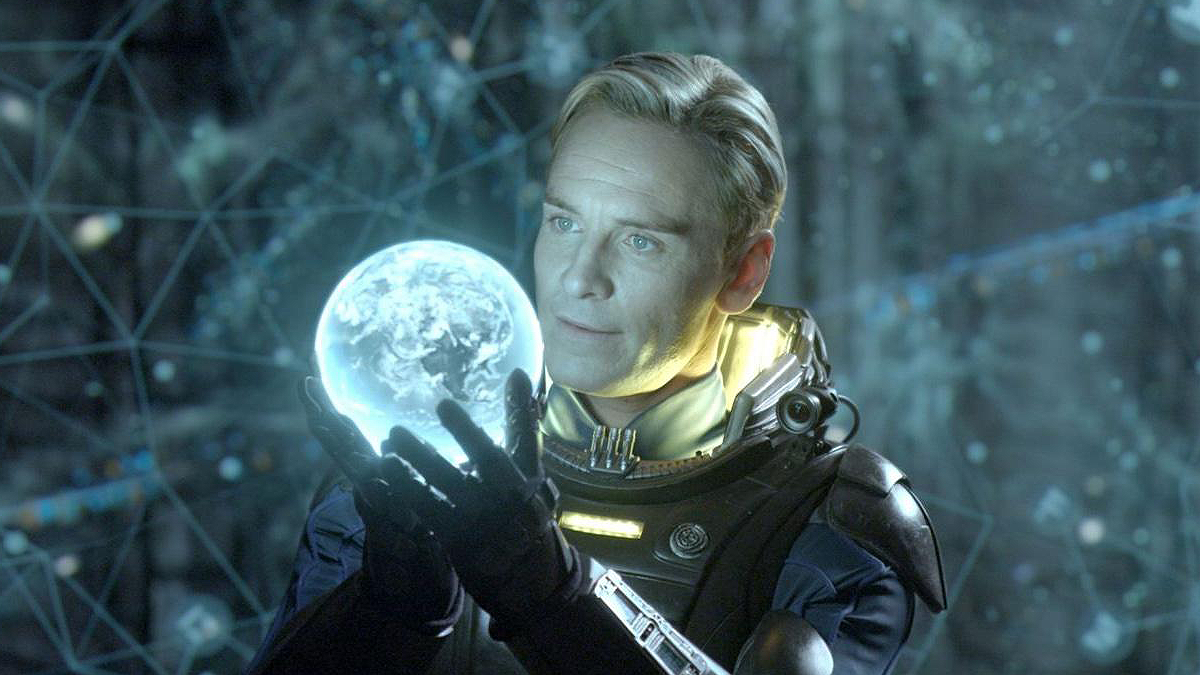 The origin of human life has tortured scientists, religious figures, and normal people since the dawn of time. While theories abound, both scientific and faith based, no solid proof has been uncovered as to the truth. In 2089, there seems to be potential to unlock the mystery of man’s origins, but what will that truth be? A team of anthropologists exploring a cave find an ancient cave painting, one similar to others found around the world. The drawing involves a specific group of stars, so with that information, a space expedition is soon undertaken. The vessel Prometheus is manned by scientists and explorers, then sent on a journey to learn how mankind came to exist. This landmark expedition could finally answer questions man has pondered for centuries, but will they discover a darker truth than they ever expected?

Prometheus is am ambitious movie. While it shares a lot of elements with Ridley Scott’s genre classic Alien, the film has very different goals in mind. The story is well crafted, but tends to let the viewers fill in some of the blanks, which is always going to divide audiences. Some will love being able to concoct their own conclusions, while others will want a more defined, structured lore in place. Regardless, the movie offers a good amount of depth and poses some interesting situations, so Prometheus has a story that keeps you tuned in. The film’s visuals are striking, with some effective special effects that help create an otherworldly texture that bolsters the lore. As far as casting, the film boasts an impressive group with folks like Charlize Theron, Guy Pearce, Noomi Rapace, and Michael Fassbender. I don’t think Prometheus is going to win over everyone, but for those who want a more ambitious sci/fi adventure, it is worth a look.

The film is just five years old and, as such, takes advantage of what makes most modern-day films look so ridiculously good. That and let’s face it, this is a Ridley Scott movie so it’s going to look good no matter what. I also enjoyed The Martian and cinematographer Dariusz Wolski was behind this one too. He’s got a great sense for visuals. Having seen the Blu-ray version a few years ago, I was pretty pumped to see how this looked on 4K. The included 2.40:1 HEVC image does look a bit cleaner and sharper, though the HDR is a tad wasted on this film. Black levels are strong and consistent with contrast looking its absolute best. It isn’t perfect, mind you, but this has been given a pretty good treatment by Fox and it shows.

This was an opportunity missed since the same DTS HD 7.1 soundtrack found on the Blu-ray is present here. It would have been a perfect time to put a new DTS X or Dolby Atmos mix on the 4K. But alas…this doesn’t sound bad by any means and it’s a very active mix, with almost constant surround presence to bolster the film’s atmosphere. This includes some potent bursts of power of course, but also some subtle and creative elements. So while some tracks lean on power above all else, this soundtrack is layered with presence that is able to do whatever the material needs. The music sounds excellent, while dialogue is clear and clean at all times. This is simply one track you need to hear to believe.

Again, this was a missed opportunity with the ever-expanding Alien universe. But the same supplements from the initial Blu-ray are included (and no 3D version is found in this set).

Having not seen this film in over five years, it’s a lot better the second time around and it really does set the stage for the entire Alien universe. It might be my favorite of the bunch, to be honest. It’s nice to see that Fox gave this one the 4K treatment, but aside from the uptick in video quality, the rest is the same as the Blu-ray which is too bad. But if you’re building a 4K library, this is a good title to have within.