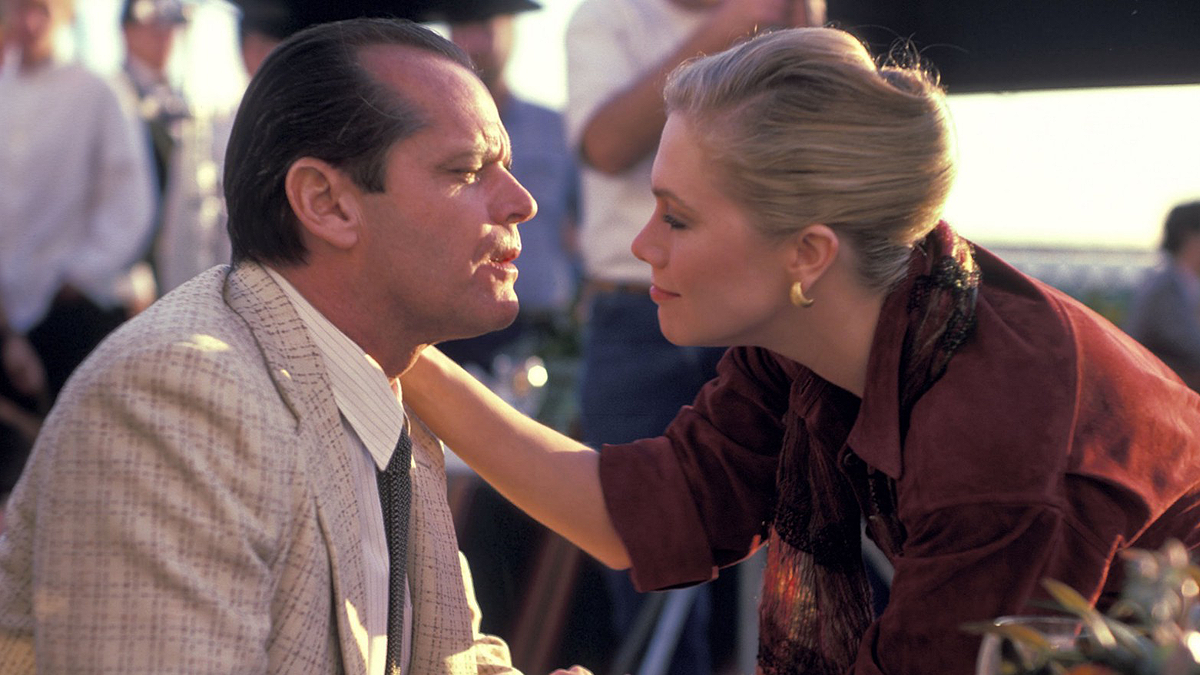 For many years, John Huston had done a lot of classic films and has had a few missteps now and then in between. In the early 1980’s, ABC Motion Picures had employed some solid directorial talent like Garry Marshall and Mike Nichols turning in solid work and in some cases have gone on to be nominated throughout this period. Huston, coming off with minor success with the soccer adventure Victory, got wind of a hot property based on a novel by Richard Condon telling the story about love being blind involving a connected guy in organized crime. There is an oath to live up to, a solid oath of Prizzi’s Honor.

Since childbirth, Charlie Partanna (Jack Nicholson) has been connected to the Prizzi family and Don Corrado Prizzi (William Hickey) has been like a second father to him. At the wedding of Prizzi’s granddaughter, a lovely looking woman in lavender (Kathleen Turner) catches Charlie’s eye. He believes he has a case of love at first sight and even gets a phone call from her the same night. Little does Charlie realize, under his nose, that his new love has been involved in a scam or two against the Prizzi family. Now Charlie might have to decide between his love and his honor to the family but the family feels there might be some use for this girl.

This was the second to last film of John Huston and even in color, Huston shows that he still had the great directorial talent that led him to classics like Treasure of the Sierra Madre or The African Queen. The film was made in the eighties but it certainly feels like a film he could’ve easily done in the forties or fifties in black and white (check out the rotary dial phones) but with very small touches of present day (at that time). The audience knows this is an older film when the traveling is in the hands of now-defunct airlines (United, Pan Am). It kind of brought a little more humor to this black comedy.

The structure of the story, the solid screenplay and the acting come together with a solid cast of a few big stars, a few on the rise, and many character actors that have a moment or two in this film. Jack Nicholson plays Charley as a dim witted connected guy who is the walking example of “love is blind”. Despite that, when it comes to matters of the family, he’s not as dim-witted as many are lead to believe. The reverse can be said of Kathleen Turner’s character. Her Irene comes off as sweet and nice and falls for Charlie in an instant, but that sweetness can be deceiving as she has exotic tastes, and can steal more than Charlie’s heart. The chemistry between the two is super.

I couldn’t let cast notice go by without mentioning Anjelica Huston. Her award winning performance as Don Prizzi’s niece Maerose gives a woman who has made a mistake or two but still has a few tricks up her sleeve when it comes to Charlie and the higher members of the Prizzi family.

John Huston gives a charming tale of an organized family’s with a great mix of chemistry, a touch of the classical within Alex North’s score, along with making way for a few subtle twists along the way. Prizzi’s Honor is honorable in every way.

It seems that this film can’t get a lot of love. The previously-released DVD wasn’t enhanced for widescreen televisions and now with this Blu-ray it looks good, but not what it could look like. It’s a very well-displayed transfer that shakes once or twice but remains bright with not too much color saturation and the transfer captures the wonderful look of the film with a few specks every now and then but for the most part, a very clean print that holds up it’s visual quality without being too showy or being too much. We’ve been spoiled by Blu-ray’s and countless restorations, but this is one that simply got lost in the mix. It’s an improvement over the DVD, but it won’t be the best-looking film you’ve seen.

The DTS HD Master Audio 2.0 mix has a few moments, but they’re far between. The outer channels benefit from the occasional score and effects and the center channels have the most activity as the mix of all and dialogue fill it through. The sound is great but slightly muted judging from the source materials but all come out clear as a bell and makes for a decent track.

It’s hard to imagine the man who brought us such classics like Treasure of the Sierra Madre, The Maltese Falcon and The African Queen was still making movies in the mid 80’s. Looking back, this movie featured a great cast and won Angelica Huston the Academy Award for Best Supporting Actress. It’s a great little film with a slew of fine performances. The video leaves a bit to be desired, but it is a step up from the previously-released DVD.