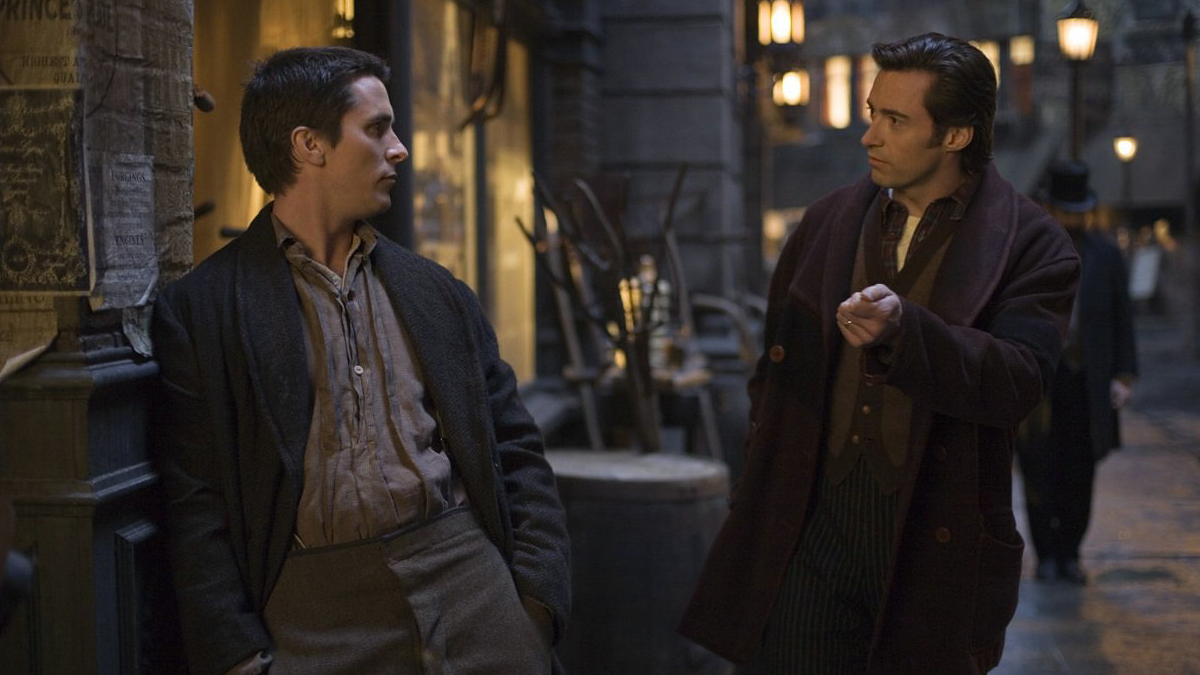 The only thing I know about magic is that I can’t do it. Now that’s not saying a lot and I have no idea if the aforementioned acts of an illusion are real or just invented by filmmaker Christopher Nolan. Whatever the case, they factor into the movie and no magic trick is complete without The Prestige. Moviegoers will no doubt remember Christopher Nolan for his amazing work on Memento. Yes, it might take you a few times to watch and finally figure it all out, but once you do it actually makes the movie that much better. He followed that up with Insomnia, a less-intense thriller set in Alaska. He rose to even more critical and commercial acclaim when he took the reigns of the new Batman franchise over and he’s imported a few of the cast members to The Prestige as well. If it’s star power you’re after, look no further. Hugh Jackman, Scarlett Johansson and Christian Bale round out a great cast with additional support from Michael Caine and David Bowie. The elements are in place, but what’s it all about?

In an effort to tell the plot, but not divulge any secrets (there is no magician’s pun intended, I promise) we meet Rupert Angier (Hugh Jackman) and Alfred Borden (Christian Bale). Both aspiring magicians working as assistants, Alfred blames Rupert for the death of his wife (which happened onstage during a trick). Rupert, out for revenge (and somewhat succeeds), becomes a fairly successful magician who clearly possesses more showmanship than his former mate. We see that Alfred has managed to make a name for himself, though it’s more of a cat and mouse game as to who can one up the other. Borden manages to come up with “the greatest trick of all-time” which fuels Angier’s jealousy. He sets out to steal the trick, even resorting to sending his assistant, Olivia (Scarlett Johannsson) to learn his secrets. All of this happens under the watchful eye of Cutter (Michael Caine), who’s responsible for building many of the magicians’ apparatus.

The Prestige is a great movie. And when it ends, you’ll want to see it again to see if you can spot all the clues you missed the first time around (they’re there, too). Granted, I’ve always been enthralled with magic (or in this case, illusion) so I was fairly easily impressed and I’m a big fan of Jackman, Bale and Johansson to boot. Director Christopher Nolan is in top form here proving that he hasn’t lost the touch he found in Batman Begins. Christian Bale and Michael Caine once again work well together and I’m constantly more and more impressed at Hugh Jackman, who shows he has more range with every new role he takes on. The pacing of the movie never really drags and even at 130 minutes it doesn’t really feel like a long movie, per se. Turn of the century period pieces may bore the pants off some but it’s not the case here. Viewers won’t be disappointed.

It’s not an illusion, The Prestige has shown up as part of the Christopher Nolan 4K collection and this marks one of only a handful of titles in the new format. The film has been given a new re-master which makes for bright, vivid colors, contrast is strong and even though the predominant color is brown, I noticed a 3-D effect to the entire film. Flesh tones are right on the mark. Thanks to the HDR, some of the scenes really have a new layer of texture and color associated with them. The last time I saw this film was when it hit Blu-ray back in 2006 (also included in the set), and this is a visual testament to Nolan and his DP as well as the increase color and resolution of 4K. This is flat out amazing.

The good news is that this has been given a new audio mix. The bad is that Nolan doesn’t believe in next generation formats, so we’re “stuck” with a DTS HD Master Audio mix. Don’t get me wrong, it doesn’t sound bad by any stretch. There are scenes at the end when a huge shower of electricity is on screen and the sound literally encompasses the viewer. It’s quite amazing how realistic this sounds. Dialogue is strong and clear and ambient effects are prevalent throughout the film. While not as loud as some action or war movies, The Prestige manages to have a robust soundtrack while not being as “in your face” as some other mixes out there. It’s a notable improvement over the previously-released PCM uncompressed mix.

Sadly we don’t get any new extras as the Ultra HD/4K disc is void of anything except the movie. The included Blu-ray contains the same slew of features that have been around for more than a decade.

As mentioned above, I haven’t seen this film since it came out on Blu-ray over a decade ago. Nolan has done a lot since then and his status has been elevated to that of Scorsese or Spielberg (in my humble opinion). I consider this to be one of this better films and that’s saying a lot. It doesn’t have all the glamour and glitz of one of the Batman films, the “epic-ness” of Inception or Interstellar, rather it’s more like his earlier work like Memento or Insomnia. For those that haven’t seen it, give it a try and for those that have been waiting for it in 4K – that wait is over.