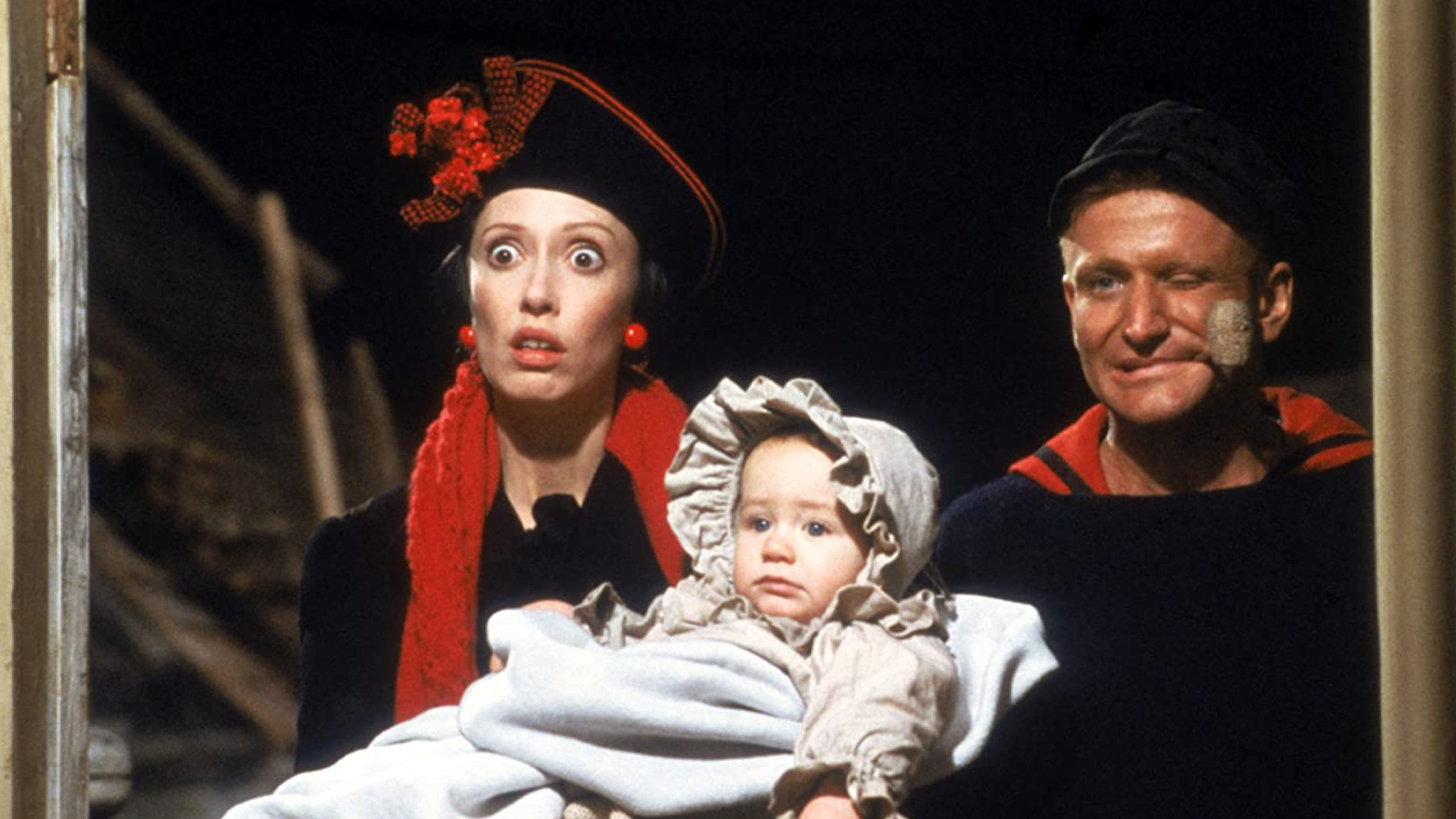 Let’s take a trip back to the 1930’s, shall we? The world was a much simpler place and the threat of terrorism or anything like that wasn’t occupying everyone’s mind. We were entertained by the Marx Brothers, Charlie Chaplin and moreso the radio than television. However, cartoons were just starting to become popular and none more so than Popeye (the Sailor Man). With his corn cob pipe, bell bottoms and forearms triple the size of any man; he wasn’t to be messed with…especially when he “atkes his spinachk”. Now I never got the whole picture of what was going on, but he and his arch-enemy Bruto (though I seem to remember a “Brutus” as well) were always beating the hell out of each other for the love of one Olive Oyl. Naturally Popeye got knocked around until he would somehow come across a can of Spinach, where he would pummel the tar out of Bluto (or anyone else in his way) until he was the last man standing. Let’s jump forward 50 years to the year 1980. Director Robert Altman, one of the better Directors working then and now, helmed the motion picture of the popular cartoon with a relative newcomer by the name of Robin Williams. Altman, known for his meticulous nature was helming a musical of all things. Would it work? Depending on who you are – yes and no.

Popeye (Robin Williams) begins the movie as he is rowing in a boat and ends up in Sweethaven (the state is not known) because he has a feeling that his “poppa” is bound to be there. The film, above all else, has some very strong family values; though they might be hard to see. Immediately greeted in a less than friendly way, he rents a room from the Oyl’s and meets Olive (Shelly Duvall in a role custom-made for her). After getting acquainted with the townfolk and getting taxed for everything but breathing, he sets out to find his father. However, the arrival of a baby interrupts his plans. Sweet Pea, the baby we all know from the cartoons, is cute as a button (and Director Robert Altman’s real-life grandson) but seems to have psychic powers that can predict the future. Wimpy (Paul Dooley), known for eating hamburgers and his famous catch phrase “I’ll gladly pay you Tuesday for a hamburger today.” is almost as famous as the cartoon itself. Bluto (Paul L. Smith) runs the town of Sweethaven with an iron fist. Not only is he engaged to marry Olive Oyl, when he finds out of Sweet Pea; he sees this as an opportunity to find the buried treasure and finally be out of the control of the Commandant (Ray Walston). Popeye’s goal is to try and rescue Sweet Pea from the evil Bluto and hopefully live happily ever after with Olive. Will it happen?

Popeye is one of those movies that I remember from my childhood as being very good. Granted, I didn’t watch them with the more critical eye that I have today (and I was only 7 when it came out for cryin’ out loud), but I vividly remember the catchy songs and it being very true to the cartoon. The cast is perfect, down to the corny sound effects and the unreal things that Popeye can do (he winds his fist up to deliver a knock out blow, uses his pipe as a periscope and snorkel, etc.). Shelly Duvall literally is Olive Oyl with her constant “Awww…Popeye” here and there and her big clunky boots. Altman has certainly had better movies to his credit, but I think this one is one of his undiscovered gems. Most critics at the time panned it and not much has changed, with only a rating of 4.8 at the Internet Movie Database. And yes, most kids these days won’t really relate to Popeye as there are so many cartoons out there. They’re liable to think of the restaurant chain before a cartoon character. For me, and those who remember it, Popeye is a welcome addition to my collection. Seeing a Robin Williams who was still strictly devoted to comedy and a relatively unknown cast (look for Dennis Franz), this is a title that many people have been waiting for.

It’s been a while since I sat down and watched Popeye in any format, but that’s a moot point since we’ve now got a 40th Anniversary Blu-ray. There’s been some enhancements made with this version and I found the overall quality of the image is something that I didn’t expect to see. The colors are bright and vivid, with most of the scenes being in the daylight, the colors (at times) seem to jump off the screen. This is a major improvement over the previous standard DVD and it shows.

A rather robust Dolby TrueHD track is included and, for the most part, the track is limited to the front stage of the speakers and such. There are times, however, that the surrounds kick in (when Bluto yells, for example) that really do give the soundtrack a depth that I would not have thought possible. The Dolby Surround track sounds good as well and true “purists” will appreciate the fact that it’s included. Either route you go, Popeye has never sounded better.

I vividly remember seeing Popeye in theaters at the ripe age of 7. I always remember being scared by the octopus for some reason! Still, as I look back on this film it’s really great. Robin Williams is one of the few who could pull this role off and the ensemble cast only sweetens the deal. This new Blu-ray looks and sounds better than the DVD and the addition of some new supplements doesn’t hurt.