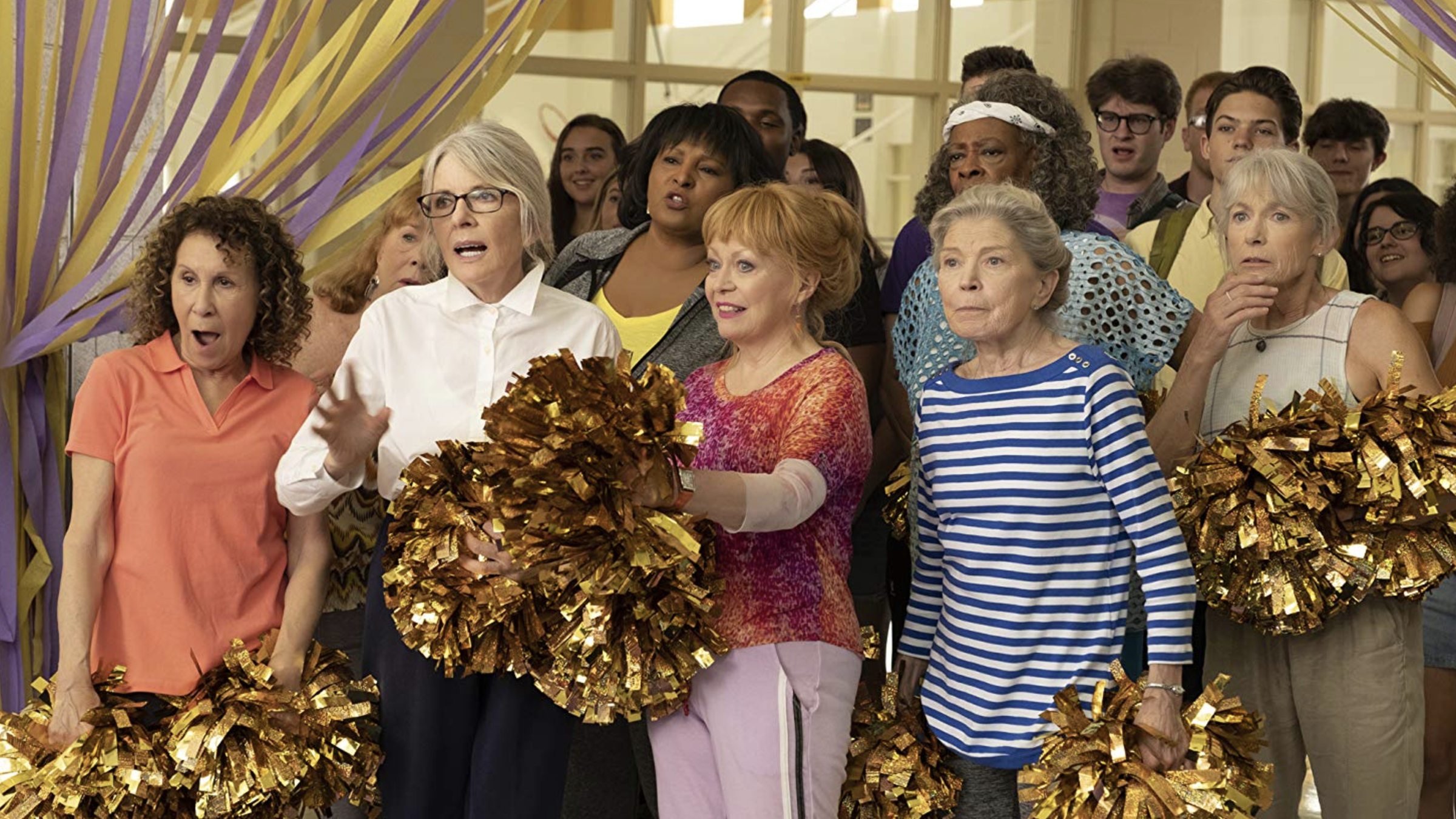 Martha (Diane Keaton) has terminal cancer and we learn that she has stopped getting treatment and stopped going to the doctor. Maybe she feels there’s little point in continuing when the circumstances are so grim. She sells her things and decides to move into a retirement community. We see her meet the supervisor and other members of the community and she’s told that every resident must participate in an extracurricular activity. Jackie Weaver plays Sheryl, she’s quite the opposite of Martha who’s more quiet and reserved. At first Martha is closed off, but eventually she and Sheryl become friends. Sheryl learns that Martha had dreams of being a cheerleader in her earlier years, so this creates the spark and the women decide to start their own squad. If you’ve seen even one film involving sports of any kind, you’ll know that there’s usually the recruitment process where we see many athletes try out. We get some silliness, but before long, a team is formed. They soon realize that they need a better place to rehearse and they practice at a high school gym. Unfortunately, there’s a miscommunication and the ladies end up performing at a pep rally. One of the students films them and the video ends up going viral. This results in them blackmailing a student to coach them and eventually join their team.

Poms gives the audience more or less what they can expect from a film of this sort. I’ll admit that, taken with the proper mindset, it can be a lot of fun. Sure, it’s a formula film and riddled with clichés, but the cast at least seem to be enjoying themselves and it doesn’t overstay its welcome. It’s the kind of film you can see once time, enjoy and move on. In other words: it’s perfectly disposable entertainment. While it hints at it a couple of times, the ending does give a bit of an emotional punch that gives the film more weight than it might’ve had otherwise. This all builds towards the big climax where we pretty much can see from a mile away, all before one final emotional scene that at least feels earned. There’s a small foreshadowing earlier in the picture, but it still got me a bit.

The film starts off with a rather sad and inevitable feeling of a woman surrendering to her illness, but it shows that she can still conclude her life on a high note with a little help from her friends. While not a classic, the critics were probably a bit too harsh on it this past summer, but it’s a good enough diversion for those wanting something different from what dominates these days.

Universal has come to be one of the more dependable studios lately, and this is no exception. With a 1.85:1 transfer, the film does have a somewhat basic look, but what’s presented is presented in a positive manner. We’re limited to only a few settings, but the image was always pleasing to the eyes. The retirement community seen in the film is set in a sunny atmosphere that lends itself nicely to the HD format. All things told, viewers should have little complaints.

The DTS HD track is also fine. The track keeps the listener engaged throughout. Obviously the cheering scenes add the most punch, but vocals are crisp and the surround channels stayed active throughout. It felt like I was sitting at a pep rally in a few scenes. Like the transfer, this track serves the film well.

This disc contains no supplemental material (aside from a DVD of the movie as well as a digital code).

Poms should please fans of the cast and films of this sort. Sure, it goes through many of the notes we’d expect it to, but there’s an emotional punch that comes with it and an ending that feels rightly earned. The cast are having fun, and silly as it is, it’s hard not to surrender to the film and go with it. Rent it.