Pairing then superstars Rock Hudson and Doris Day, “Pillow Talk” is a timeless and charming gem from Universal’s back catalog of 100th Anniversary releases. The film tells the amusing story of Jan Morrow, a woman in the unenviable position of sharing a party line with “sex maniac” Brad Allen. The two know nothing about each other except the sound of their voices at first, opening the movie up for all sorts of shenanigans later on when the two feuding talkers meet in person. Brad starts out with something of an upper hand as he’s aware of who Jan is from the get-go. Finding her a far more attractive nemesis than he’d bargained for, Brad thinks on his feet and comes up with a non-threatening alter-ago for himself called Rex Stetson in order to get on Jan’s good side until he can “seal the deal”. Now, since this is a romantic comedy in that most classic of senses, it’s never really in doubt where this story is headed or what the outcome will eventually be. What makes “Pillow Talk” hold up after all these years, and what made it a hit back in its day, is both the razor-sharp writing and undeniable chemistry of its two leads. With two lesser performers, in fact, this film likely would have been long-forgotten in the annals of movie history and been relegated to the infamous $5 bin at Wal-Mart alongside copies of “Navy Seals” and “Red Dragon”. As chance would have it, though, Universal struck gold with the pairing, lending an all-too- familiar story its own sense of style and charm that probably never existed on paper.

“Pillow Talk” succeeds best when it has fun with the Jan / Rex / Brad triangle. At several key junctures, Brad uses his real voice and personality to steer Jan’s relationship with the fabricated Rex character he’s created, and the results are always hysterical. One such instance has Brad insisting that Rex is only after sex in dating Jan, only to use the assertion to dispel her misgivings later that evening. Another far more ironic sequence involves Brad insinuating (in a harmlessly subtle, late 1950’s way, of course) that Rex may actually be gay and not interested in her at all beyond discussing cooking recipes. In the context of the film, this is quite amusing as it opens the door wide open for Rex to disprove her concern by offering to take her away for the weekend on a romantic getaway. Considering the real-life story of Rock Hudson, of course, this particular subplot becomes something of an awkward reminder that the actor was, in fact, a homosexual who died prematurely of AIDS several years later. But being as this is a film from a more innocent (or perhaps just more sanitized) era, it’s probably best to leave that bit of trivia at the door. Looking back on this film today, though, it’s made even clearer just how gifted a character actor Hudson truly was, playing up the suave and sleazy playboy role to the hilt. About the only character I can remember who took such glee at bedding hapless women was Ted Danson’s Sam Malone from Cheers, and I suspect that that character’s existence owes more than a bit to Mr. Allen.

I’d be remiss if I let this review pass by without acknowledging the fantastic comedic work done by Tony Randall here as a friend of both Brad and Jan. It’s admittedly a rather massive stretch to see someone so close to these two not simply figure out what’s going on from reel one, but seeing Randall’s Jonathan character both thwarted by Jan and outsmarted by Brad at every turn is a joy to watch, and it only gets better as the film progresses. One simply has to swallow major plot questions like how this entire situation could possibly play out without someone in the foursome using full and proper names and spoiling the illusion after about thirty minutes, let alone the weeks we’re meant to believe. But these types of films work solely because of unrealistic conceits like these, and half of the fun in watching them is seeing just how the inevitable misunderstandings and mistaken identities, however outlandish, will finally come unraveled in the final act. If “Pillow Talk” has a weakness for me, it’s that the ending feels a bit too pat and tacked on. There’s the obligatory blow out when Brad’s true identity is finally discovered (and again, that’s inevitable, so I wouldn’t consider that a spoiler per se), and Jan is naturally furious for a while. But then all that just sort of fizzles suddenly and before we know it, we’ve stumbled into the obligatory happy, Hollywood ending. That said, this film is just fine at what it sets out to do, which is to give us a bit of harmless and cute romantic escapism for 103 minutes. Certainly there are elements here that are obvious products of their time and don’t age particularly well (I can’t help but cringe when people break into song for five minutes of screen time, even if they’re at a bar and it makes contextual sense), but as a light-hearted, feel-good movie with great performances and humor that’s stood the test of time, you could do a whole lot worse.

“Pillow Talk” looks very good for a film of its vintage, though I couldn’t help but feel while watching it that it could have looked even better had Universal not engaged in some overly-zealous digital tinkering here and there. It’s obvious that a bit of DNR has been applied to the image in places, though the problem isn’t a consistent one throughout the duration of the film. I also detected a (very) small level of edge halos in a few higher-contrast shots now and again, but nothing too terribly distracting. On the plus side, detail level for a movie like this is exemplary, and there’s certainly never any question that you’re watching the film in HD. Colors leap off the screen with a saturation that simply didn’t exist after the age of Technicolor productions, and black levels are spot on and never veer into crush territory. If contrast seems a tad pushed overall, it’s most likely attributable to the filming style of the time and not to a deficiency of the blu-ray presentation. One issue that such high resolution makes crystal clear is the consequence of early optical composites. In fact, it’s this element that is the most uneven in watching “Pillow Talk”. Any shot that features a wipe, dissolve, or screen flip (of which there are many) suffers from the in-camera processing greatly, and loses quite a bit of the pop and crispness of the shots that immediately bookend them. You’ll find this phenomenon all through the viewing experience, and while it takes a bit of getting used to, I actually came to appreciate being able to watch a film like this on a format that brings these inherent qualities in the print to light. Before this blu-ray edition, in fact, my only experience with this movie was on an old, non-anamorphic DVD. Needless to say, all caveats aside, the new transfer leaves that and all previous versions in the dust. Fans of the film will no doubt be thrilled with what we have here. I just wish Universal had stayed their polishing hands a bit more and stopped just short of compromising an effort that would have been even truer to the source. But all in all, this is a good and solid effort for a worthy film. Subtitles are available in English, French and Spanish.

Admittedly, there’s not a lot that can be said about the DTS HD Master Audio 2.0 track that’s presented here. As a mostly dialog-driven affair, “Pillow Talk” doesn’t exactly give your sound system a workout, and I’m glad that the film has been granted an audio track that simply stays true to how it sounded in theaters. Voices are always intelligible, and the general sense of transparency is fairly strong considering the limited elements of the time. This being a mono audio source, there’s obviously not much in the way of envelopment, but then, that’s not really the point of the track. The mix does pick up somewhat during the film’s occasional music scenes, but obviously things stay anchored to a mono soundstage. I have a feeling that film purists will embrace this presentation whole-heartedly, as my best guess is that it’s just as good as (possibly better than) what people heard when they went to see the film in 1959. While some may bemoan the lack of a surround presence, I for one would much rather the blu-ray contain this audio mix than opt for a newfangled, gimmicky affair and trash the original mix in the process (I’m looking at you, “The Sting”). So overall, nothing to write home about perhaps, but fans of the film should be more than pleased. A DD 2.0 mono track is all that’s included with the DVD version.

“Pillow Talk” comes to bed with a handful of moderately interesting extras that should appease fans of the film. First up is an audio commentary by film historians Jeff Bond, Julie Kirgo and Nick Redman. I must admit that he film geek in me fully enjoys strictly contextual, informative commentary tracks like this one. While I wouldn’t go so far as to call the track lively, it’s sure to be a fascinating listen for those interested in such things. On a side note, it’s a shame that Doris Day couldn’t be a part of this commentary. She’s still around today, and as part of Universal’s 100th Anniversary collection, it would have been a major selling point to hear her thoughts on one of the big hits of her career so many years on. With Rock Hudson having already passed, I feel like this was something of a (small) missed opportunity. Also included is a pair of feature-specific featurettes. The first, “Back in Bed with Pillow Talk”, discusses how risqué the film actually was for its time (a funny thought considering how absolutely tame it all seems today) and runs a bit over 20 minutes in length. The second, “Chemistry 101: The Film Duo of Doris Day and Rock Hudson” highlights the on and off-screen relationship of the film’s leads, though at a scant 5 minutes, it unfortunately doesn’t really have the breathing room to go into any real depth on the subject. Rounding out the extras is a trio of “100 Years of Universal” featurettes, “Restoring the Classics”, “The Carl Laemmle Era” and “Unforgettable Characters”. All three of these “features” are really more of a multi-part advertisement for Universal’s 100th Anniversary rollout of blu-ray titles than anything fans of this particular film will find indispensable. Far more valuable (at least to me) is the booklet included in the movie’s excellent digibook packaging. Filled with actor bios, script excerpts and advertising campaign memorabilia of the time, it’s a wonderful addition to what will likely be the definitive release of “Pillow Talk” for years to come. 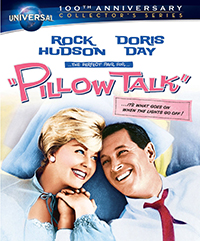