“A house that doesn’t change is a dead house.”

This most recent awards season saw Paul Thomas Anderson return to the Academy Awards. His new film, Phantom Thread, was nominated for six awards including: Best Picture, Best Actor, Best Director, Best Supporting Actress, Best Original Score, and Best Costume Design. On the big night the only winner was Best Costume Design for Mark Bridges. It was a tough year at the academy and while the film is certainly fantastic I don’t think it was capable of uniting the Academy in endorsing it. This film is another great accomplishment for P.T. Anderson and a fine swan song for the great Daniel Day-Lewis.

At the beginning of the film we are introduced to a famous dressmaker, Reynolds Woodcock (Daniel Day-Lewis.) At the beginning of the film, he dismisses a young woman who desires his affection which he is incapable of providing. Going to the countryside, he meets a young clumsy waitress named Alma (Vicky Krieps). On their first encounter he tells her, ”You can sew almost anything into the canvas of the coats.” He keeps a lock of his mother’s hair in his coat. As their relationship develops and she becomes a muse to his dressmaking, he still keeps her at bay. He explains that, “marriage would make me deceitful and I don’t want that,” when she tries to get closer to him. The relationship between Woodcock and his sister Cyril (Lesley Manville) is complicated. Cyril is incredibly judgmental of Woodcock’s loves and is very involved in every aspect of Reynolds’ life as his assistant. Woodcock has several demons. Whenever he sells his work he falls into episodes of sharp depression. He keeps everybody at arm’s length and is focused almost exclusively on his art and work. As Alma becomes jealous of his attention towards others, she begins to act out in ways that are potentially dangerous.

This film is told mostly through imagery with the dialogue cutting like a knife when used. I like how the film uses sound and silence to show people’s inner emotions. When Alma eats or causes noise it annoys Woodcock, but as the film progresses she becomes louder, as if trying to get a rise out of him by simply existing. As somebody who hates the sound of people chewing, I appreciated these clever choices. Anderson is one of the greatest directors of the last twenty years, and when he makes a film it is an event. This is easily his slowest film – I would argue that it is even slower than The Master – but that lends to attention to detail. He intentionally holds back on any notion of traditional plotting until halfway through the film. It’s a classic rope-a-dope, allowing the audience to be drawn in for a tense second half. Casual filmgoers will be thrown off by the pacing, but more observant viewers will be rewarded for their patience.

Daniel Day Lewis is as good as you would expect. This is supposedly going to be his final performance in a career that has always shown his unbelievable talent at acting. If this is his finale as an actor, it is a fitting piece. Lewis can do more with silence than a thousand actors can do with words. I hope that he reconsiders retirement because he will be sorely missed. Anderson displayed his ability to draw a fine performance out of him in There Will Be Blood and proves once again that they are a great match for each other’s sensibilities.

For a film like this to work, a talented costume designer must be at the center of the picture. If the dresses did not wow the audience, the film would fall apart. Mark Bridges deserved the Oscar for his contributions to the film. It also takes an incredibly talented cinematographer, which happens to be the director himself, and this film is gorgeously shot in 70MM film. Anderson is a film enthusiast and one of the last directors to shoot on film in this manner because it is incredibly tedious work in an age where digital film is simply easier. His decision to shoot on film lends to incredible detail that is just not possible even with the greatest digital cameras. My hope is that more directors will take this approach. Right now only Anderson and Tarantino are keeping the dream of 70MM alive.

The score by Jonny Greenwood is absolutely fantastic. Greenwood is best known for his work in the best band in the world Radiohead, but he has also composed on every P.T. Anderson film since There Will Be Blood. Here Greenwood shows his virtuosity can extend to piano jazz or classical stylings. It is becoming obvious that his abilities have no limit. His ability to overlap noises and music was apparent when I grew up listening to OK Computer and Kid A, and this talent is just as present here. A New Year’s sequence in the film is a great example of how a score should take center stage when necessary before fading back into the background. This was easily one of the best scores of the last year and I hope that someday he receives the Oscar that has evaded him thus far.

At the end of the day, this is Anderson at his most challenging. The film’s slow pace will throw off some viewers, but it is worth watching all the way through. The ending is truly great, even better than you can expect. It elevates the film from very good to great. For people who are patient enough, this film comes very highly recommended.

Fans waiting for this Ultra HD version had an additional six weeks to “judge” the Blu-ray and see if they wanted to pony up for this 4K offering. After looking at the two, I can say that it’d probably be worth the wait. There’s no easy way to describe how a 70mm looks on disc aside from the sheer amount of color and depth that it possesses. The 4K picture offers more detail, greater color depth and an overall more pleasing image. As is stands, though, this is simply a beautifully-shot film. Detail, texture, extreme closeups of hair, fabric and wardrobes – it looks stunning. While not the most colorful palette, it’s dominated by grey’s and more earthy tones, it makes up for in sheer beauty. This is one amazing-looking picture in every respect.

The DTS X mix found on the film might seem an odd choice and it is the same track found on the Blu-ray. Yes, maybe this next generation track would be better-suited (pardon the pun) for a Marvel movie, but there’s something so intricate about Jonny Greenwood’s score. Vocals are rich, pure and crisp, surrounds churn out some barely-audible ambiance and we’re treated to an almost etherial aura of sound. This is one of the most understated soundtracks I’ve heard in a long, long time.

The same supplements that were (and are) present on the Blu-ray are also on this Ultra HD disc, which is nice.

Overall, Phantom Thread is a challenging film. Fans of Kubrick’s Barry Lyndon will find themselves at home here, with a film that takes its time but has great emotional heft and needs the time allotted to draw the audience into its world. P.T. Anderson is one of my favorite directors and this film finds him in excellent form. I hate that Daniel Day Lewis is retiring but this film is a fitting finale for one of the greatest actors of all time. The score by Jonny Greenwood is incredible and the cinematography is top notch. For the serious film lover, this film comes very highly recommended. 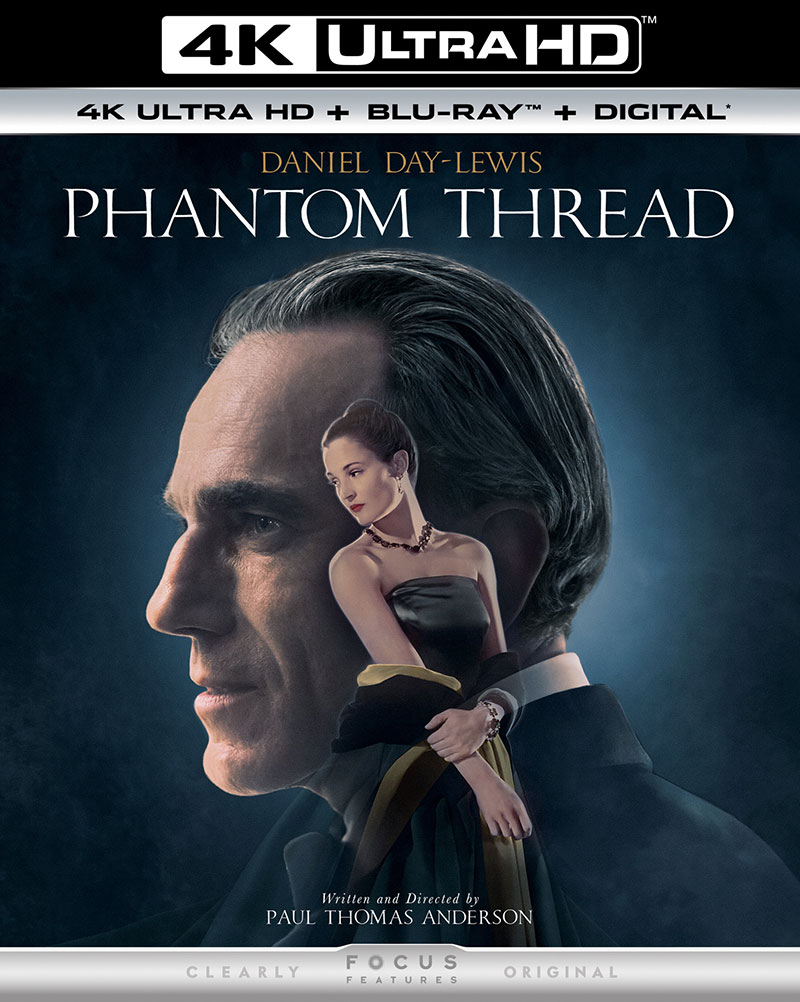