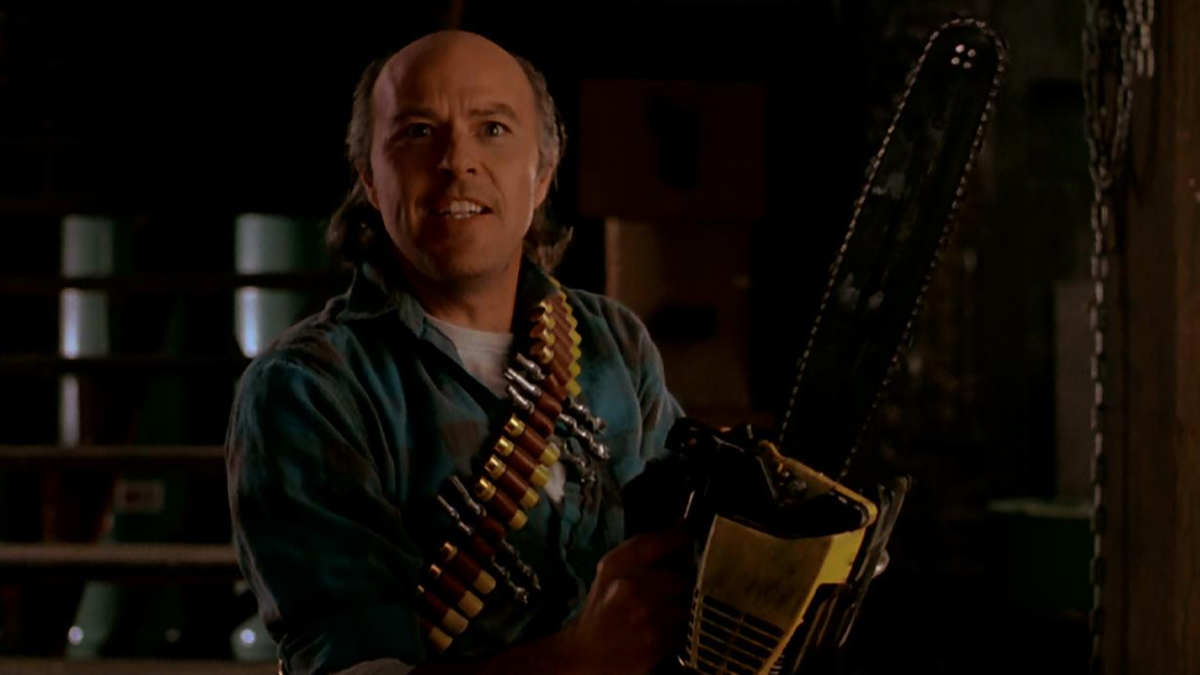 Shout!Factory has always been one of the best places to find horror titles and cult films. One of the directors that the label has championed over the years is Don Coscarelli. In my humble opinion, Don Coscarelli is one of the best indie horror directors to ever work in the medium. Shout!Factory has released two films thus far from Coscarelli – Bubba-Ho-Tep and Phantasm II. We can only hope in the coming years that they might acquire his films Survival Quest, and The Beastmaster to round out our collections. These two would fit in with other films on the label perfectly. I decided to sit down and watch the sequel to Phantasm – Coscarelli’s most heralded film. The film had been released on Blu-ray a few years ago, but since it wasn’t up on the site, I decided to cover it and share my opinion with the masses.

Phantasm II picks up directly after the events in the first film. Reggie tells Mike to go upstairs and pack. The Tall Man (Angus Scrimm) arrives at the house along with a gang of his hooded dwarves. Reggie manages to turn off the pilot lights to the stoves and turn on the gas in the kitchen. He makes his way to the upstairs and throws himself and Mike out the window. They move away from the house as it explodes – barely avoiding the gaze of the Tall Man. Seven years later, Mike (James LeGros) is seeing a psychiatrist. He has thoughts and visions of a girl that is in danger. At the local cemetery Mike digs up some empty graves. He is interrupted by Reggie. He tells Reggie that the Tall Man has been in his thoughts along with a girl with whom he feels connected. Mike feels like it is up to them to stop the Tall Man. Reggie convinces Mike to go to his house for dinner. On the way there, Mike has his thoughts interrupted by the Tall Man saying, “Welcome home, boy!” Reggie’s house explodes. At the funeral of Reggie’s wife, it’s decided. They need to head out in the Hemicuda to find the Tall Man and kill him. As they track him across the country, there is evidence of the mayhem that the Tall Man brings with him.

Last year, I blew through Coscarelli’s autobiography True Indie. In Coscarelli’s book, he discusses Phantasm II at length. The film had what he considered a massive budget of three and a half million dollars. With that came a solid production designer, an amazing practical effects crew, and a stipulation for the studios – he had to cast somebody else to play the role of Mikey. He passed on a young Brad Pitt at the time and cast James Legros in the role. For Coscarelli, this was something he always felt bad about because he had such a strong bond with A. Michael Baldwin. He made it up to Baldwin by casting him in the next three films. James Legros is solid in the film and you really can not knock his performance, but A. Michael Baldwin was born to play that role.

Luckily, Reggie Bannister is back in the role of Reggie: balding former ice cream man, sometime musician, and all around badass. In this film, Reggie is given a lot more to do than before. He gets to carry a quadruple barrel shotgun or a chainsaw for the majority of the film. If you are wondering, yes, there is a chainsaw fight like in the classic film Dark of the Sun. New additions to the cast include Paula Irvine as Liz and Samantha Philips as Alchemy. Both do solid jobs in their respective roles. The Tall Man, Angus Scrimm, is back for the sequel and exudes cool in every scene he participates in. Angus Scrimm was never less than captivating in this role.

Also – the flying chrome balls are back. This time there are three of them including a shiny golden one. The scenes with the chrome balls really deliver in this go-around thanks to the amazing practical effects utilized in the film. The special effects crew included Greg Nicotero and Crit Killen amongst others. The death scenes in the final thirty minutes are all awesome and will satisfy fans of the first film. Like any horror sequel, this film is gorier than the prior film but it never felt grotesque. Phantasm II also has a little more sex in it than Phantasm, but it is still pretty tame by the standards of Eighties horror films. These two items combined do make the film feel a little bit more R-rated than the prior film.

The reason to watch any of the Phantasm films is to watch Don Coscarelli’s imagination run wild. Coscarelli has always done so much with so little. In a perfect world, Coscarelli would be given huge budgets to make whatever crazy idea he has in his mind at the time. For now, at least we can enjoy the films that he has been able to make and read his incredible autobiography.

Phantasm II is not going to dethrone the original, but from my perspective, is a really fun and worthy sequel. While Phantasm II is a little sillier and less frightening than the original, there are numerous fun ideas that the film explores. The movie also ends on a high note. Recommended.

Phantasm II was released by Shout!Factory very early into the company’s history in 2013. Obviously, the format has continued to improve in the years since the release and evidenced by the amazing new transfer that was given to their release of Candyman. That said, I watched the film on my 4K television on my UHD disc player, and it looked great. Presented in 1.85:1 aspect ratio with an MPEG-4 AVC Encoded image, the 1080p presentation looks nice. The beginning of the film has a little bit of noticeable grain and occasionally during some very dark scenes the grain becomes apparent again. The scenes shot in the daytime look remarkable in the new format. Honestly, for a six year old release, I thought the film held up remarkably well. Fans should be happy with this until we hopefully get a 4K scan in the future.

Similar to the video, the audio presentation on Phantasm II is very good. The DTS-HD MA 5.1 track gives a great surround treatment to the synth based score by Fred Myrow and Christopher L. Stone. The track is really pretty loud and when the action starts it gets pretty darn fun. That said, the track limits the surround to when in really makes sense and most of the dialogue and effects are front speaker focused. I did occasionally feel like this film had a soft-loud dynamic due to the characters whispering so often, but it wasn’t as annoying as in some cases. For purists, they have also included a DTS-HD MA 2.0 track.

Phantasm II is a fun sequel to one of the greatest horror films ever made. It’s not quite as frightening and the tone of the film is a little sillier than the first film, but it is still a great entry in the series. Fans of Phantasm owe it to themselves to see how the adventure continues. It’s a lot of fun. If you are a fan, you are going to thoroughly enjoy the special features on the disc. They are well worth your time. If you have not added this disc to your collection, there is no better time than now. 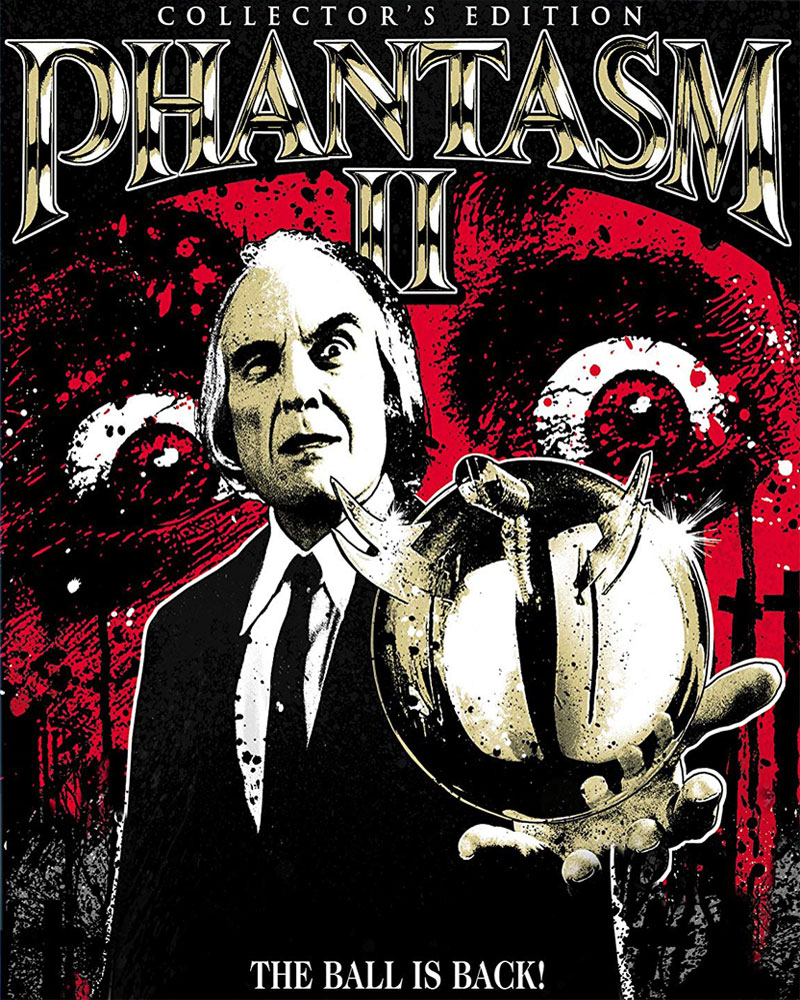