With the success of Disney’s live action films (based on their animated counterparts), we’ll undoubtedly see some that we might not expect. 2016 brought us The Jungle Book which was both critically and commercially successful and later on in the year we’re treated to the tale of Pete and his dragon. If you’ve ever seen the campy 1977 version, this was one I didn’t actually mind if they re-made. As is the case with some of these films, the plot has been changed just enough so it feels both new and refreshed and that, of course, is a good thing. And while this movie might seem an odd choice of all the movies in Disney’s vault, give it time – we’ve got plenty more ahead of us (with Beauty and the Beast up next). It’s now time to suspend your disbelief and enter the world of Pete and Elliot.

For six years, Pete (Oakes Fegley) has lived in the forest on the outskirts of a small town under the care of a giant, green dragon he named Elliot. Meanwhile, local town resident and forest ranger Grace (Bryce Dallas Howard) has grown up listening to the tales that her father (Robert Redford) has told of a magical dragon that lives in the wild. Pete is found by Grace’s boyfriend Jack’s (Wes Bentley) daughter Natalie (Oona Laurence) and he is taken into town, while Elliot is hunted by local lumberjacks who want to cut down the trees where Pete and Elliot call home. It is then up to Pete, Grace, Natalie, Jack and Grace’s father to save Elliot and keep alive the myth of the town dragon.

And that’s it. Yes, it’s not rocket science to figure out the plot of the movie and that’s ok. It’s aimed at kids and they want to see a big giant flying dragon. I can’t tell you how long it’s been since I saw the original 1977 version (probably not too long after it came out) so this is a rare instance in which a re-make is actually a good thing. Writer/Director David Lowery certainly had a passion for the project and he’s assembled an all star cast to get this green dragon off the ground. It’s got everything that a Disney movie should and then some. Though the box office didn’t do quite what Disney expected (it grossed $75 million on a $65 million budget), it was well-reviewed and certainly not a flop. I’m sure it’ll spread its wings on home video.

Filmed in New Zealand (see the accompanying supplement below), Pete’s Dragon has some scenes of breathtaking beauty that only this country could offer. Of course, the 2.40:1 AVC HD image is top notch and I wasn’t expecting to find anything wrong with the transfer. The blend of CGI (yes, sorry, dragons aren’t real) and live action is amazing and looks so lifelike and real, you want to believe that the dragon is right there! It’s not, though. The dark look of the forest is coupled with the bright and colorful sky when Elliot and Pete “take a ride”. Flesh tones are warm and natural, looking at the natural beauty of Bryce Dallas Howard and the contrasting wrinkles in Robert Redford’s face is a testament to how clear (though not exactly flattering) the image really is. Nothing wrong with this one, it delivers.

The included DTS HD Master Audio soundtrack is also quite active at times. Vocals come across pure and rich, but what really got me was the use of surrounds. There are chase scenes through the forest, trees breaking, branches “in your face” and everything in between. The way the sound is used is that it envelops you in the film, which is the point, but I felt it used very well here. The LFE have a few moments to shine as well and all things considered, this track really helps move the film along and takes the viewer on a ride to boot!

Pete’s Dragon is, has been and most likely always will be a classic. Admittedly I wasn’t too excited to see yet another re-make, but it is consistent with what Disney is doing with their older animated (or in this case, half-animated) titles and giving them a new lease on life. It’s got all the elements and all the boxes checked. The kids will get a kick out of it for sure. 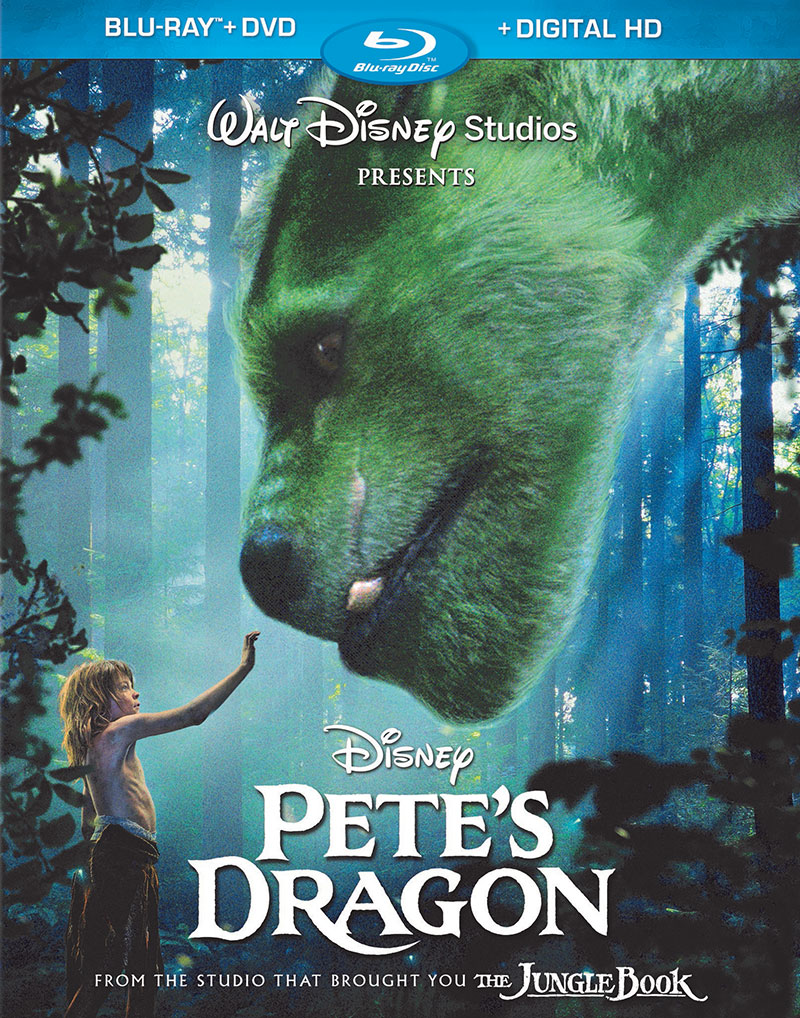