Youngsters are often told bed times stories to help them sleep, tales of adventure and fantasy that carry them off to a new realm once they’re asleep. One such story is the legend of Peter Pan, the young man who refuses to grow up, and lives with his Lost Boys in a magical place called Never Land. Wendy, John, and Michael all hear that tale, many times over, before settling down in bed, so many times that they had the story memorized. They would act out the tale, playing different roles, trying to bring the legend to life, if only in their bedroom. One night, the legend would truly come to life, as Peter Pan pays a visit to their home, and offers to sweep them away to Never Land to enjoy all the fun that awaits there. With a little sprinkle of pixie dust and a happy thought, Peter and his sidekick, Tinkerbell, have the kids flying out the window, on their way to Never Land. But not everything in Never Land is fun…the nefarious Captain Hook and his water logged crew are there, with intentions of evening the score with both Peter Pan, and the “tick tock”ing crocodile that forced him to have a hook instead of a hand. Can Peter and his friends rescue Never Land from the pirates or will Hook have his revenge and rule Never Land?

This film is another in the long line of true animated masterpieces by Disney. The animation is superb, with great attention to detail, fluid movements, and a nice cast of characters. This movie has put some indelible faces to the myth of Peter Pan, the foremost being Captain Hook. Anytime I hear the story or even a mention of it, I think of the cartoon version of the Captain, who still looks as nasty as ever. Disney’s visual replication of Peter has also stood the test of time, and is the image many conjure up when thinking of Pan. And let’s not forget Tinkerbell, she’s a symbol of Disney’s history as well. Now, I like Julia Roberts in Hook, but this animated Tinkerbell is tops with me. The idea of this film is that no matter how old we are, we are always as young as we are in our hearts. Just because you are old does not mean you have to feel old, you can feel as young as you wish, as long as you have your dreams. This is one my favorite Disney films because of the deep, rich tapestry this story weaves, and how well Disney set the legend to this picture.

Of course, I am biased about this film, because I love all things swashbuckling, pirates and swordfights, you name it. The action in Peter Pan is fast and fun, with Hook stopping at nothing to gain his revenge, and Peter trying hard to make the Captain look as foolish as possible. This is a great, fun adventure movie for the whole family, with a little something packed in there for everyone. The antics of Tinkerbell are worth the price of the disc to me, as she brings some unique comedy to the feature. As with all the recent Disney animated releases, the price tag is high, but this disc is worth the money. One of Disney’s all time best, it warrants a place in the collection of all fans of Disney and adventure fans as well. This is the third release for Peter Pan, but the third time is the charm, as this version is superior to the others. So even if you own one of the previous editions, you’ll want to replace them with this new three disc Diamond Edition.

There will be, no doubt, a mixed reaction when it comes to Peter Pan’s visual presence on Blu-ray.  For the 99% of those out there that just want a  movie to look good and have it sparkle on their HDTV – they’ll be happy.  And I’m pleased to say that the movie has literally never looked better due in no small part to the Disney restoration team.  Colors are lively, Tinkerbell’s pixie dust sparkles and the entire movie seems to have a more vivid look and feel to it.  Now that’s what the 99% see and they’ll be happy.  Those other 1%, as with everything in life, are the complainers and will make this into something it’s not.  Disney did take a few liberties with the transfer, removing some grain and even altering a bit of the colors and hues.  While nothing drastic I’m sure the purists out there will be shocked to learn that they’ve actually tampered with Walt Disney’s masterpiece.  My personal opinion is this: so what?  No amount of whining will actually do any good, so just enjoy one of the better classics that Disney put out in all of its HD glory.  And for those that still have a problem with what Disney did, I’ve got two words for you: grow up.

As appalled as some are when the print is messed with, no one seems to mind a much when the audio is “tampered” with.  Having said that, Peter Pan has a full on DTS HD Master Audio 7.1 mix that’s sure to rock the house.  Yes, Peter Pan will make your room come alive with sound.  I never thought I’d be typing that.  The difference really lies in the surrounds as anyone who has seen the film is most likely familiar with the dialogue and songs.  It’s the little things that really resonate in the back speakers that bring this to life.  The score sounds top notch, the LFE even get involved and essentially anything having to do with this soundtrack sounds amazing.  While not perfect, this is nearly it.

Disney has gone the extra mile with this Diamond Edition and while they could have merely rehashed what was on the Platinum DVD Edition, there’s some new material here (though a few of the DVD Extras do make their way here).  The movie starts off with an introduction by Diane Disney-Miller who gives us a bit of insight and tells us of her father’s attraction to the film.  Moving onto the actual “extras” we have the same audio commentary found on the DVD which isn’t really an audio commentary, but rather a series of recordings edited together you can listen to during the film.  One of the most interesting features is “Growing up with Nine Old Men” a term that Walt Disney gave to his lead animators.  While they’re no longer with us, we do get some insight from their children in this 40 minute feature.  We do get two deleted scenes and two deleted songs from the Disney vault.  We’ve also got two features from the classic DVD with “Backstage Disney” and “Music and More” both of which have a vast selection of supplements in and of themselves.  At any point, the film can be paused and you’re presented with a “Disney Intermission” which allows you to do some Pirate Training.  The younger viewers will get a kick out of this.  You can also choose the “Sing a-Long” version which puts the words on the screen via subtitles and you can also fill the bars on the side of the screen (remember this transfer is 1.33:1) with some Disney artwork.  Lastly you get a bevy of Disney trailers. 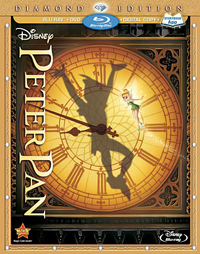