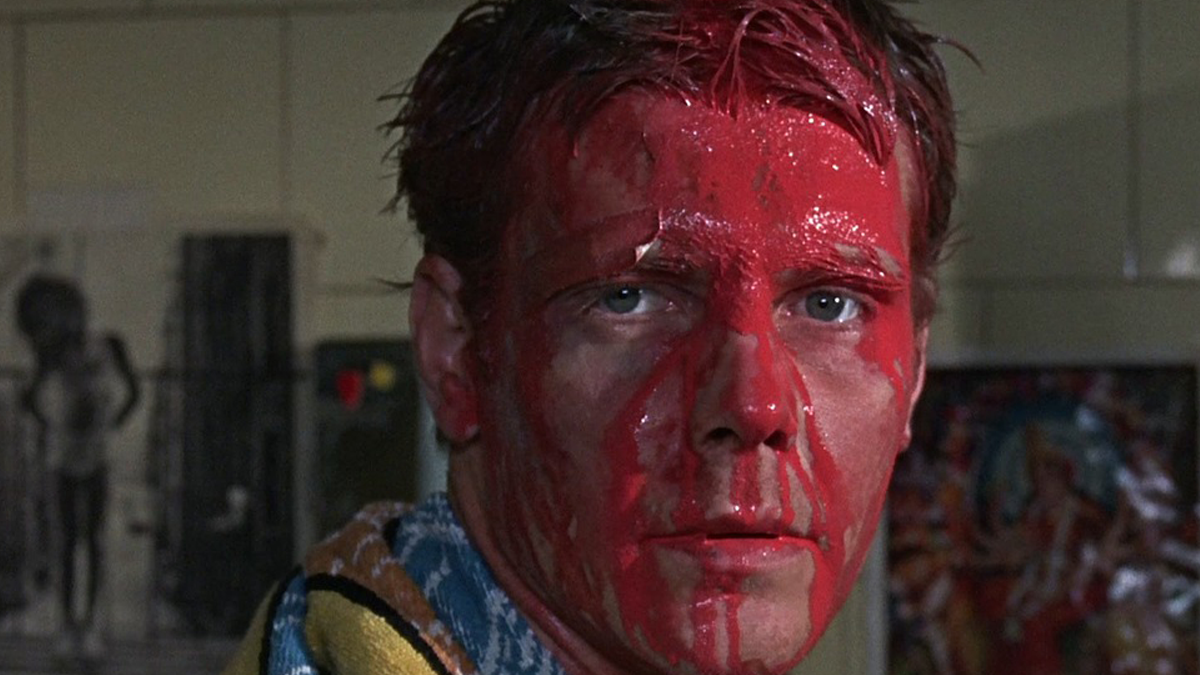 I recently have been a little bit obsessed with the Nixon era. I recently ready the book Playing With Fire about the 1968 election and that sent my on course to read and watch as much as I can from the time period of 1968 to 1972. The Nicolas Roeg and Donald Cammell film Performance is a great film for evaluating that era. Even though the movie was filmed in 1968, it was not released until 1970; unfairly shelved by Warner Bros. for two years. This in many ways works in the film’s favor. A film this radically experimental and violent, fits in better into 1970 than I think it would fit into 1968. 1969 had brought so much violence into the world that this film makes more sense a year later. To keep it in perspective, it was filmed a year before Altamont and released a year after.

The film opens with a man engaging in rough sexual activity with a woman intercut with scenes of a Rolls Royce driving while loud rock and roll blares. The man is Chas (James Fox), a hard edged and violent enforcer for a criminal enterprise. When he makes his boss angry with him, his boss sends a man to teach him a lesson. After a humiliating show of force, Chas breaks free and kills the man and knocks out his cronies. Fleeing the scene of the crime, he puts red paint into his hair and tries to blend in. Posing as an entertainer he rents a basement room of boarding house owned by a former rock star. He meets the enigmatic and beautiful Pherber (Anita Pallenberger.) He claims to be a juggler and then he meets the enigmatic former rockstar and owner of the boarding house, Mr. Turner (Mick Jagger.) Turner wants Chas to leave but the gangster persists despite his objections. Mr. Turner had retired a few years earlier and now indulges in a drug fueled orgiastic existence with Pherber and another woman named Lucy (Michele Breton.) While the gangster awaits his new passport he falls in with their strange harem, indulging in hallucinogen mushrooms and sexual escapades while his gangster past zones in on him.

This is a crazy film. I can be pretty harsh on experimental films when they don’t work well (are you listening Godard?) Obviously, when watching a film of this nature it is very hard to tell if an audience will enjoy or loathe the experience. If you have seen other films by Nicolas Roeg (Don’t Look Now, The Man Who Fell To Earth – the next two films he directed) you will expect the editing of the film to be fairly frenetic and the film to expect you to fill in any details that seem strangely absent. For some people, this will be a very jarring experience. For this film Roeg was paired up with another experimental artist Donald Cammell who adds some extraordinary colors to the film due to his background in painting. This is easily one of the least linear and most bizarre films that a major studio has ever put out. The first half of the film is a gangster film, and the second half is bizarre and indescribable. If this is your cup of tea, have no fear and dive in.

James Fox does a great job in his role, but he is overshadowed by two non-actor performances: Anita Pallenberger (then Keith Richard’s girlfriend) is incredibly sexy in her role, and Mick Jagger is absolutely great in this movie because his screen time is so limited. Roeg knows how to use rock stars well (see him direct Bowie) and he gets something great out of them. This film is sexual, violent, colorful, and crazy as hell. I don’t fully understand it, but I don’t really care. Sometimes it is nice to just let a film’s aura wash over you. This movie has atmosphere for days and somehow captures perfectly the confusion and violence of that era. I enjoyed it and will watch it again in the future.

Warner Archive continue to impress with a brand new 1080p HD transfer that was remastered specifically for this release using an MPEG-4 AVC encode. The film was shot in 1.85:1 and is presented in an 1.77:1 aspect ratio. The video transfer is pretty exceptional. Colors are vivid and fine detail is about as good as one can expect when you consider Roeg’s soft focus techniques are used frequently like in his other films from the 70s. This is a film with a lot to look at thanks to the artistic contributions of Donald Cammell. Blu-ray reveals so much more of this film and I highly recommend making the leap to this format if you own a prior release of the film.

Performance has been given an incredibly well-done DTS-HD MA 2.0 track that sounds absolutely great. Listening to the film blare out of my speakers, I had no idea that it was a mono recording until later in the film. This film does not have a flat sound, partially due to the lively score by Mick Jagger. Dialogue at times can be a little difficult to understand because it is fast talking British, but I think the transfer has done a great job of ore serving and expanding the original elements.

Performance is best described as an experience. It is not like any other film. I mean this as the highest compliment but I am also very sure that it will not appeal to as many people as it will probably turn off. It is a trippy, sexy, violent, bizarre piece of filmmaking. I couldn’t keep my eyes off of it. Warner have provided an amazing video transfer and solid audio. Fans will want to upgrade immediately and new viewers should seek out this version. Recommended.