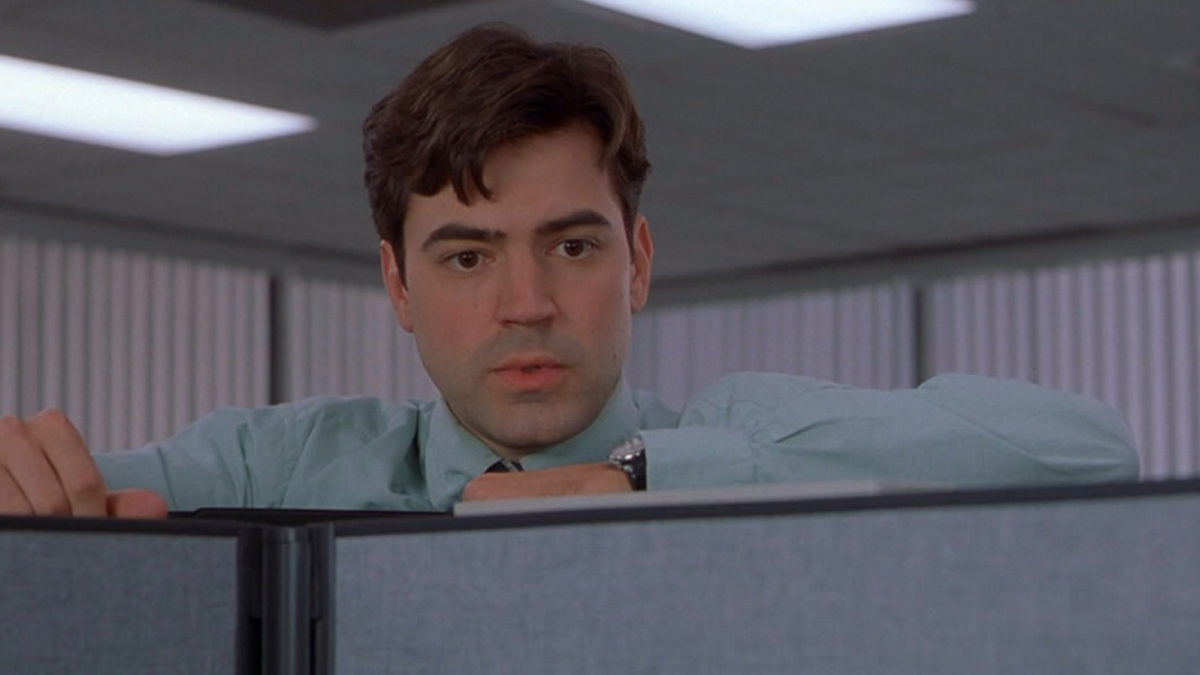 That was the tagline for what has got to be one of the most poignant films of the last 25 years. And, let’s face it – it does. It’s been said that there are two kinds of people in this world: those who work to live (most of us) and those who live to work (the crazy ones). I put myself firmly in the first category. So in February 1999, Mike Judge made his live-action debut with Office Space. At the time, most knew Judge from his work in animation with cult classics Beavis and Butt-Head and King of the Hill. But for the masses, Office Space not only hit home, but knocked it out of the (business) park. A snapshot of 90’s corporate America, Judge’s film seemed to hit every nail on the head. Admittedly, the post-it sized plot wasn’t quite enough to sustain the entire movie, but that aside this film gave the “Milton’s” everywhere something to behold.

Peter Gibbons (Ron Livingston) hates his job. He’s a computer programmer at Initech. He writes bank software for the (then) upcoming 2000 switch. It’s a mind-numbing job that’s progressively driving into an advanced catatonic state. Peter, with help from girlfriend Anne (Alexandra Wentworth), is taken to group therapy where, after his doctor dies of a heart attack, is left in a zen-like catatonic state with a pronounced change in his work ethic. Consultants are brought into the company to make a few changes, but Peter’s newfound attitude impresses them. He’s promoted, much to the bewilderment of his clueless boss, Bill (Gary Cole). In his newfound position he and soon-to-be-dismissed cohorts Samir (Ajay Naidu) and Michael Bolton (David Herman) conspire to hatch a get-rich-quick scheme, much to the chagrin of Peter’s girlfriend (Jennifer Aniston).

Office Space worked and for all the right reasons. When the film came out I was six months out of college and was working in an atmosphere like this. Everything was nailed right down to the corporate poster featuring its motto: Innovative Technology. For all the 9 to 5’ers out there, a chord was struck and it even resonated into real life. A prop in the film, a red Swingline stapler, was not actually manufactured by the company. The disgruntled masses spoke and it spurred the company to produce one. Every “Milton” was now happier, at least during the day. While the third act does suffer a bit, there’s really no performance that isn’t memorable. Lest we forget Peter’s carpenter neighbor who takes a little too much pride at being a part of a new McDonalds! A perfect movie it isn’t, but it’s one that’ll stop me in my tracks, make me shutter and glad that I no longer work in cubicle land.

Oh Fox. What are we going to do with you? When you put out a cult classic like Office Space, complete with new (albeit worse) cover art and add “Anniversary Edition”, you include a new transfer. And you didn’t. So what do we really get? Well, you get a repackaged version of a Blu-ray that’s been around for nearly a decade. So, yes, the 1.85:1 AVC HD image looks good, but not great. It’s got a few blips and debris that can be found. Compared to some of the 4K titles I watch and newer Blu-ray’s, the picture looks old and dated by comparison. Detail seems to be a bit above average, but this is in dire need of a new restoration. Given the content, I’d watch this on VHS, but we’re celebrating a film that deserves to be given a new transfer. If you already own the Blu-ray, there is no need to upgrade. The disc is identical to the one that’s already available.

The included DTS HD Master Audio soundtrack doesn’t have a lot of room to expand. Comedies, by and large, don’t need to use the robust Dolby Atmos mix to make their points. And there’s nothing wrong with the way this sounds as vocals are clear and crisp and directional effects, sparse as they may be, do the job nicely. There are a few moments in which the surrounds chime in, but this is a front-heavy track that serves its purpose.

Office Space is a marvel of a film. I simply adore it. And, more to the point, I can relate (a lot of us can). We identify with the characters and though the story may be a bit far-fetched, it’s easily overlooked. Fox’s “Anniversary Edition” is a total bomb. It’s the same disc that came out in 2009 with some new cover art. If you already own the film, and I’m guessing many of those reading this do, there is NO reason to upgrade unless you like the new cover art. I don’t.