None But the Brave (Blu-ray)

Frank Sinatra was multi-talented. Aside from being one of the most charismatic crooners of the last century, Sinatra was also a pretty competent actor with numerous strong credits to his name (From Here to Eternity, The Manchurian Candidate, The Detective.) I was pleased to see that Warner Archive Collection was adding Sinatra’s directorial debut None but the Brave to their eccentric line of archival releases. The film, also produced by Sinatra, was shot in Technicolor and filmed in Panavision. It’s a unique film that deserves a discussion of both its pros and cons.

The film begins with a Japanese combat platoon led by Lieutenant Kuroki (Tatsuya Mihashi), stranded on an island in the Pacific without communication, building a boat. An American aircraft carrying medical supplies and a platoon of soldiers crash lands on the same island after being hit by a Japanese plane’s bullets. After surviving the crash landing, the men are dismayed to learn that their communications equipment is damaged. When they realize that there are Japanese on the island as well, Second Lieutenant Blair (Tommy Sands) wants to immediately attack them with all the power they have. Captain Dennis Bourke (Clint Walker) quickly takes command by quoting an obscure loophole in the marine manual (which he made up.) The Japanese and Americans fight one another at first, but when the Americans realize that the Japanese hold onto the only drinkable water, and the Japanese realize the Americans hold medical supplies, they strike a temporary truce. When a young Japanese man, Hirano, is injured, the Americans send in Chief Pharmacist Mate (Frank Sinatra) to assist. He amputates the leg successfully and the Americans are allowed to drink the water without fear of retribution. The truce is struck between Kuroki and Bourke with the proviso that if either side is rescued, the war will resume. The soldiers develop an unsteady friendship with one another, while also covertly seeking strategic advantages in case the truce dissolves.

None but the Brave is definitely unique. The film is definitely not perfect, but it is interesting. I will explain what I mean. Because the film is written by an American writer, John Twist, and a Japanese writer, Katsuya Susaki, both sides of the conflict are represented well and with dignity similar to films like Tora! Tora! Tora! That helps to separate the film from other films. I find it somewhat remarkable that Sinatra would tackle a project like this film as his directorial debut. The film has a unique climax that erases many of the mistakes of the film. It is definitely a film with a message and despite some issues with the film, the message comes across loud and clear. If the film was made today, I think it would have the proper realism needed to achieve something really interesting. For now, the film is a really interesting, but somewhat shallowly done, treatise on war and the terrible price that people pay in conflict. I will also give the film high marks for having the violence in the film draw blood. When people die in the film they don’t just fall over after clutching their chest. Typically a small blood pack releases when they are gunned down. This is a minor touch, but notable.

The direction – visually the film looks great from the first frame.The film is beautifully filmed thanks to the tropical setting and stellar cinematography by Harold Lipstein. The acting? Tommy Sands is terrible. He honestly hurts the film with his ridiculous caricature of a Southern idiot Lieutenant. Frank Sinatra is good in the film but I have always thought he was pretty good as an actor. The classic Japanese actor Tatsuya Mihashi who worked with Akira Kurosawa in several films is good – but his performance is stilted when speaking English. When watching his performance, it is pretty obvious that he does not have a solid command of the language.  Unfortunately, the dialogue written for him would lead you to believe otherwise. He still manages to put nuance into his facial expressions so it is hard to say if this is a good performance or a bad one. Clint Walker is well cast as the All-American Captain. This guy would be a superhero in Marvel movies if he was still working today.

Warner Archive Collection have provided a transfer in 1080p in the original aspect ratio of 2.35:1. This transfer, from a new remaster, looks great. The cinematography by Harold Lipstein looks fantastic and maintains a great amount of detail from the widescreen framing. The film was shot in Technicolor in Panavision and like many films of that time Blu-ray is very kind to it. Fans of the film will be very happy to see how well it has turned out.

This DTS-HD MA 2.0 Mono sounds good and can get pretty loud. Obviously, since the film is in Mono, you should temper your expectations accordingly. The score by John Williams is well done and sounds great. The action scenes were surprisingly robust at times. This is another solid effort by Warner Archive.

None but the Brave can best be described as a good attempt with an interesting premise and a great finish. It is mainly notable for being a very strange choice for Sinatra’s first directorial effort. I am glad that I watched the film, warts and all. Warner Archive has provided a fantastic transfer of the film and the soundtrack is great. 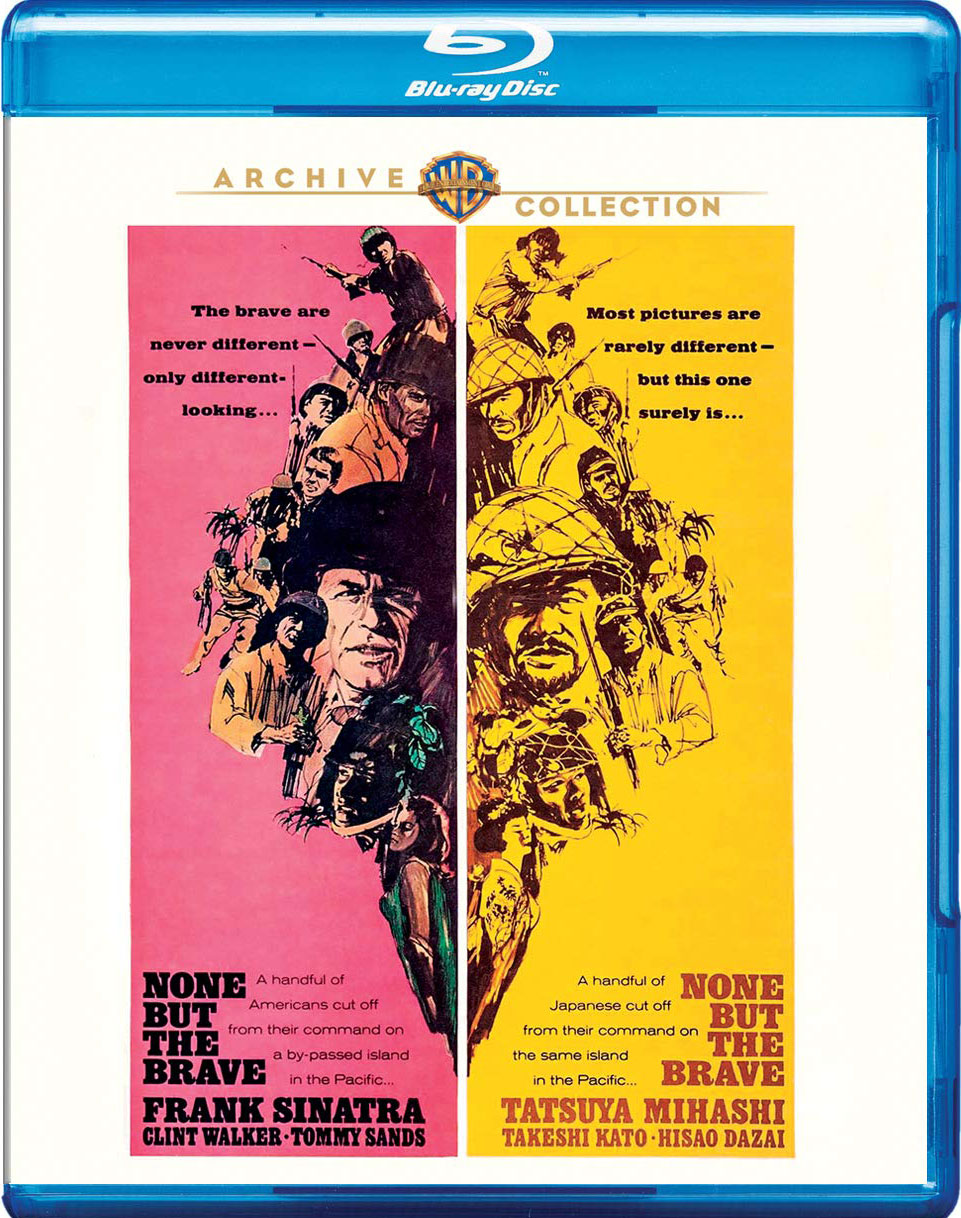