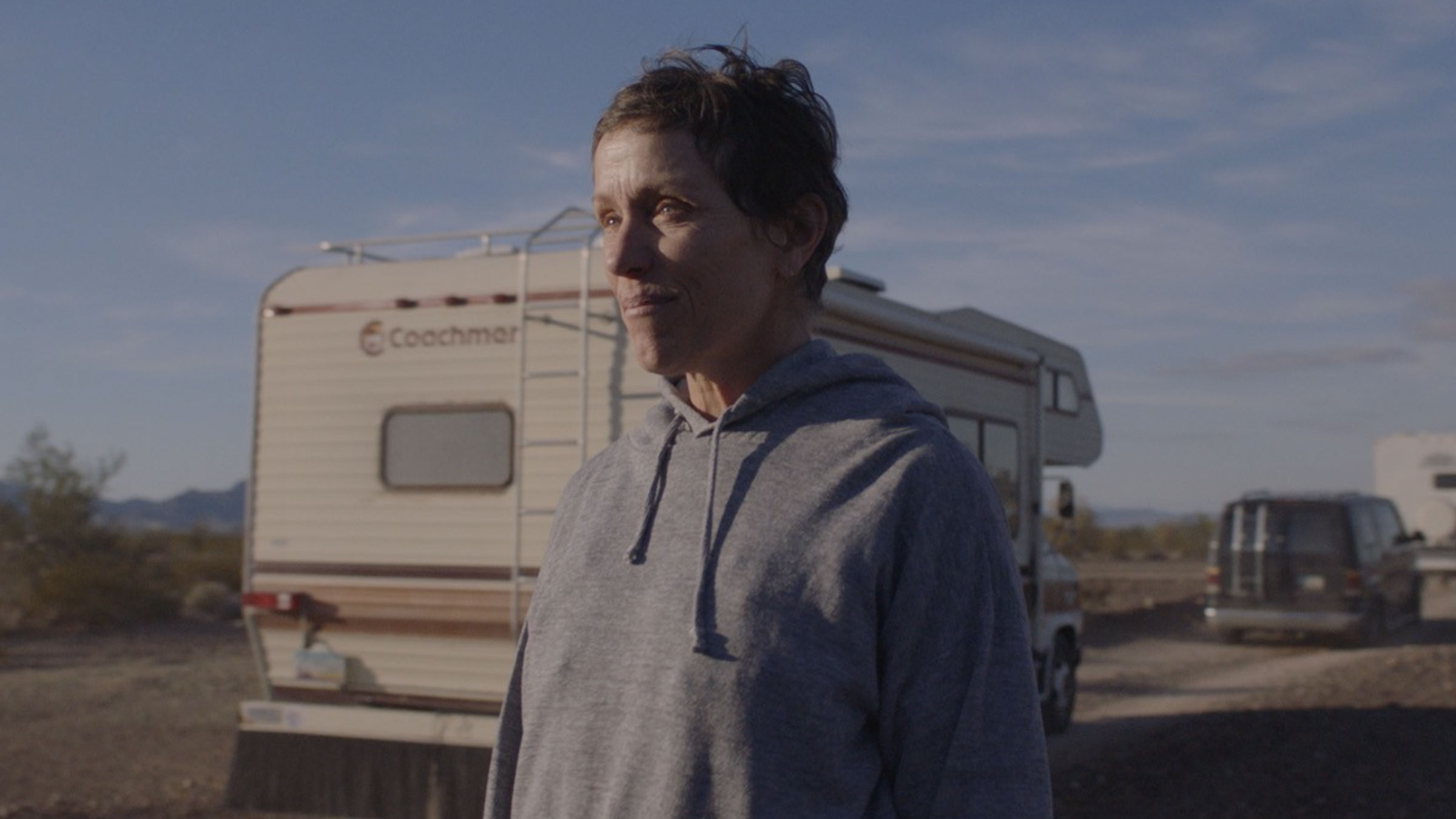 I’m materialistic. There, I said it. I don’t think there’s anything inherently wrong with that. There’s nothing bad about rewarding yourself with things that might make your life better or easier or happier. But I also realize that material things don’t mean everything to everyone. After all, as Frank Capra’s movie title said…you can’t take it with you. After all, we’re all food for worms eventually. But I do have a great respect for people who can life off the land. Heck, it’s only been the last century or so that we’ve been able to afford the creature comforts that make our life “better.” Still, some are drawn to a life on the road, living off the grid and have no qualms about it. This is what Nomadland is and it’s quite stunning.

Fern (Frances McDormand) has spent most of her adult life at a factory in Alaska. It’s since shut down during the recession and as a result. she’s lost everything save for her van and a few items within. She gets a job working at an Amazon fulfillment center where a co-worker informs her of a group of people just like her. They live in their vans or RV’s and travel from place to place picking up seasonal employment. Fern’s resume isn’t exactly going to land her in a corner office so she figures that this is the best option for her and joins them. And, in a nutshell, that’s it. The only other recognizable face is that of Dave (David Strathairn), another figure who Fern manages to befriend.

The film’s plot is synonymous with its title. It just kind of drifts from scene to scene, yet there’s a lingering narrative that’s always present. What’s more impressive is the work of McDormand. She took home her third Best Actress Academy Award for her role as Fern, and (as of this writing) ties her with Meryl Streep. Though I doubt either is counting. The film also won Best Picture as well as Best Director for Chloé Zhao. Not to take anything away from the other Academy Awards, but if a film is to win a few, these are the ones to take home. And, all this aside, the movie crawls at a snail’s pace. It’s not one that will pander to audiences and reminds me much of Robert Altman’s McCabe & Mrs. Miller in which we’re kind of dropped into these characters lives, only observing. Some like that. Others don’t. As I’m sure has been guessed – I do.

The film is beautiful in every sense of the word. Vast, sweeping and picturesque shots of the landscape are just made for a television as big as one could imagine. I’m a novice photographer and I absolutely love shooting landscapes. It’s a shame that this didn’t win the Academy Award for Best Cinematography (it lost to Mank), as I felt that any still from this film could also classify as a work of art. That said, the 2.39:1 AVC HD encode brings us a very naturalistic and lifelike transfer that’s a bit dark from time to time, but it’s supposed to be. Black levels are strong, detail is razor sharp and shows the years on many of the actors’ faces. This reminds me a lot of some John Ford films who celebrated the entire frame. It’s a stunning and accurate visual representation.

Equally strong is the included DTS HD Master Audio mix. While not one of those that will make the windows shake, it’s a very understated soundtrack. Vocals are sharp and crisp, though I found them a bit low at times. It’s one of those that you have to pay attention to else you’ll miss a line or two of dialogue. Surrounds are intermittently active, though they do add some additional “oomph” when necessary. It’s a great track and one that perfectly compliments the film.

Is Nomadland a great film? Absolutely. Is it entertaining? Well…yes. And no. If you’re looking for an edge-of-your-seat thriller, then this isn’t for you. But there are plenty of those out there. It’s a character study, to be sure. I was reminded of a favorite of mine – Nebraska. Odds are if you like that, this is for you. Regardless of your opinion of the film, it’s the 94th Best Picture winner, so it’s worth checking out regardless.