Nico Mastorakis is certainly not a household name, but the Greek director of films such as Hired to Kill and The Zero Boys has had a pretty good run on Blu-ray. Niche labels like Shout!Factory and Arrow Video have picked up the mantle and released several of his films. I have become a fan of his work but it definitely is directed towards a fun loving crowd. His films are campy and may not be loved by everyone who watches them. They have a certain charm to them that will shine through to some viewers. Now that Shout!Factory has released Vice Squad, starring the great Wings Hauser, I felt compelled to check out Shout!Factory’s release of Nightmare at Noon. This gave me a chance to have a double feature of Hauser this week and also knock one of the films by Nico Mastorakis that I had not seen off of my list.

Passing through a small town in Utah in an RV, lawyer Ken Griffith (Wings Hauser) and his wife go to a small diner. They meet drifter Randy (Bo Hopkins.) Unbeknownst to them, a secretive government agency is performing an experiment on the small town. They have sealed off the town and released a toxin into the aqueduct that causes the town people who drink the water to become enraged lunatics. The experiment is being led by a mysterious albino (Brion James.) At the diner, Randy and Ken witness a local man go crazy and become violent. Sheriff Hanks (George Kennedy) and his daughter Julia (Kimberly Ross) arrive on the scene and try to calm the man down. When the enraged citizen kills a policeman (that also happens to be his son,) the Sheriff has no choice but to shoot him. The man bleeds green blood. It is not long before other citizens, and Ken’s wife, begin to show effects from drinking the water. Ken, Julia, Hanks, and Randy team up together to find those responsible and save their town as the citizens erupt into madness and violence. At the same time, the secret agency begins to clean up any evidence.

Nightmare at Noon starts off promising, but there are some real pacing issues. A lot of the pacing issues in the latter half of the film are caused by all the shots of horseback riding. The audience will understand that the film tries to turn itself into a Western, but the filmmakers could have achieved this without all the nonsensical editing. Honestly, I feel like there is a fun film in here but the editing of the movie distracts from the dialogue and occasionally from the action. The action in the film is not as refined as Mastorakis showed in The Zero Boys. It is closer to the action seen in Hired to Kill, but the editing is not nearly as fluid.

That said, there is still a lot to enjoy here. The central performances are a lot of fun. My favorite in the film is a ham fisted performance by George Kennedy. I love watching that guy act under the direction of Mastorakis. It does not rival the amazingly bizarre performance by Oliver Reed in Hired to Kill, but there is a scene involving fire that stands as my favorite scene in the film. I enjoyed getting to watch Wings Hauser act, but his performance here is much more restrained than some of his other work. Bo Hopkins is always fun to watch, but his physique here doesn’t lend itself to action star status. Some of the action scenes are definitely hampered by his cadence. Brion James looks insane in this film as “the Albino.” He elevates the film by his sheer presence, even though he is not given a ton to work with here.

The film’s overall plot is a fun mashup of The Crazies and Western films. I also enjoyed the dialogue in the film which is full of one liners. The film features a delightfully cheesy score by Hans Zimmer and Stanley Myers. It is worth noting that this is the same Hans Zimmer that would go on to score Christopher Nolan’s films. The film’s cinematography by Cliff Raike benefits from his years as a camera assistant on films like Magnum Force and The Yakuza. There are some really impressive aerial shots in the final third of the film.

Presented in 1.85:1 aspect ratio with an MPEG-4 AVC Encoded image, the 1080p presentation looks nice. The transfer of the film was done in 2K from the original 35mm print, so fine detail is solid. Because the majority of the film is shot in the day time and in Utah, the film exemplifies strong fine detail and shows off the Western locations. The most striking shots are in the aerial helicopter sequences in the finale of the film. Fans should be really happy with the results here.

Similar to the video, the audio presentation on Nightmare at Noon is capably done. The DTS-HD MA 2.0 stereo track sounds pretty great thanks to the campy soundtrack courtesy of composers Hans Zimmer and Stanley Myers. The film does not have much in terms of depth, but the audio presentation is pretty clear. The action sequences have explosions and gunshots, but they are mainly of the canned sound type. Fans should be happy to see the original sound design arrive intact.

Nightmare at Noon starts off strong but is hampered by some pacing issues and poor editorial choices. Fans of Nico Mastorakis will find themselves pleased but they will probably not rank this as one of their favorite films by the Greek director. That said- Brion James, Wings Hauser, Bo Hopkins, and George Kennedy are all fun to watch in B-movie mode. The archival documentary by Nico Mastorakis about making the film is enjoyable and full of interviews, but it would have been nice to have some brand new features for this release. As it stands, this is a fan pleasing release of a decent Nico Mastorakis film. 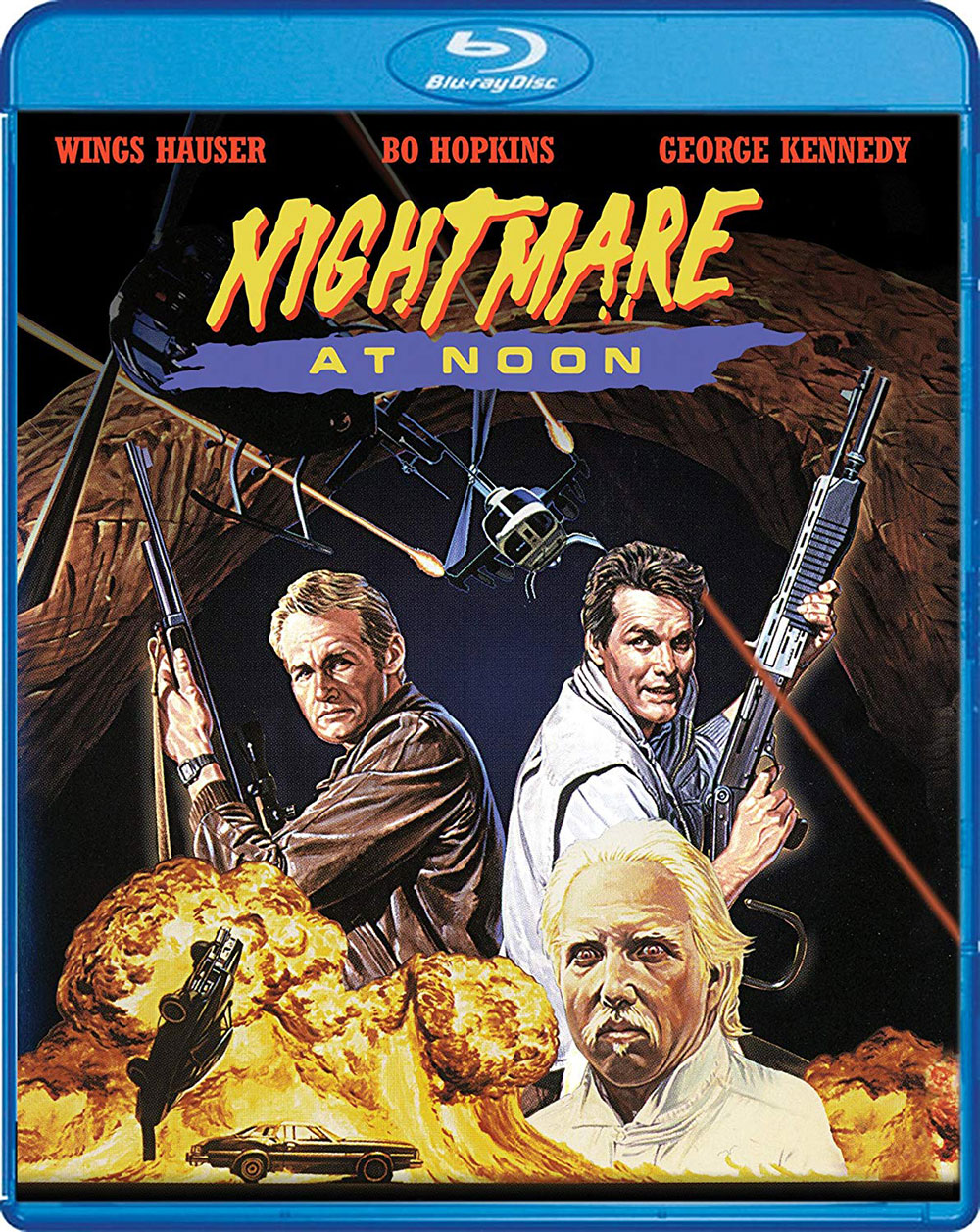